In 1983 my wife and I moved into our first home on a ¾ acre lot in a small city and could finally have a puppy.  She was a black Labrador Retriever whose AKC registration name was Monona Midnight Melody, but we called her Samantha. We knew nothing about raising a puppy and there were not abundant dog trainers to work with, nor could we have afforded them at the time.

I bought the best-selling dog training book available and tried to teach Samantha according to the instructions of the author, whose methods I recognize today as aversive and largely based on positive-punishment.  At the time I thought I was doing the best I could for my puppy, relying upon an “expert” in the field to guide me through the process.

Punishment did not suit me or I my puppy so I stopped using the book and fumbled along, trying to teach Samantha in spite of my ignorance.  Despite the multitude of mistakes I made in “training” Sammy, she actually turned out well.  I chalk that up to having a really smart dog. I also knew nothing about the puppy socialization process, and yet she turned out behaviorally normal.  Indeed, she could have been a great therapy dog…only I had never heard of that either.

Sometimes we manage to stumble through puppy training and socialization, in spite of ourselves.

My wife and I were socially active in our youth and we had a wide circle of friends, many of whom visited our home for backyard parties, friendly visits, and puppy birthday parties.  We hosted volleyball games in which Samantha got to engage with the players and chase the ball, and football games in which she often grabbed the ball and ran off, only to be tackled by one of our guests.

Interacting with a wide variety of human beings in playful activities conditioned Sammy to have a positive association with humans.  She never displayed any hesitance to meet new people.

Sam learned to play with other strange objects as well, such as chasing soap bubbles, bouncing balls and Frisbees.  Fetching objects was a game she enjoyed, so virtually anything I tossed became a toy for her.

I also took Samantha for walks and jogs throughout the city, at various times of day and night.  She was exposed to pedestrians, bike riders, joggers, all manner of motor vehicle traffic, various walking surfaces, and nearby school playgrounds.

We both enjoyed playing on all of the equipment designed for children.  Raising a puppy brought out the kid in me.  Sam learned to climb the ladder and go down the slide, and to turn around and scamper up the slippery metal slide back to the top where I greeted her enthusiastically.  She gained balance and confidence on the Merry-go-Round as I spun it, and  together we walked the wooden suspended bridge on one playground, hanging out in the high towers on each end of the bridge to celebrate our adventure.

Very often we visited the local beaches and boat landings where Samantha could explore the shoreline, sniff the smelly stuff that the waves brought ashore, greet the ducks and the raccoons who also loved the water, and rush into the waves to swim and chase sticks that I threw for her.

It just happened that we lived two blocks from the police and fire stations, and city hall.  That was where the tornado siren was located.  There were numerous times when sirens blared and emergency vehicles rushed past, and she learned to accept them all in stride.

She also loved car rides and got to visit lots of interesting locations, such as parks, festivals and parades.  One evening we returned to a small village where I previously worked and watched the fireworks being set off, about 100 feet away.  She watched the display with us, without flinching. Back at home Sammy watched me split firewood on the driveway and stack it along the fence in the back yard.  She climbed upon the wood pile, sniffing and exploring the whole time.  When she snow fell she plowed her nose into the white fluff, sniffing out the critters who lived beneath the wooden shelter.

I was active with woodworking projects at the time and so Samantha got used to power tools, and my occasional cursing as I wounded myself with a pointy object, or two.  Just more normal human stuff.

Inside our home we frequently played games such as hide-and-seek, and one of her favorite play toys was a large cardboard box in the basement.  She got to use her senses of hearing and smell to search and find me.  If I hid in the box and she found me, then we celebrated with a puppy party! 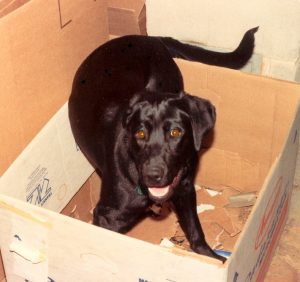 Sam also grew up with a variety of family pets, such as hamsters, rabbits and guinea pigs.  The hamsters would climb on her as she laid on the floor, and took naps nestled on her warm fur.  Our bunnies were litter box trained and ran about the house romping and playing, and our guinea pigs lived safely in their home, on the dining room floor.

Samantha was gentle and kind with one and all, and never was aggressive or reactive to others.  She would not even bark when someone came to the door, so I taught her to bark, and then stop.  I never heard of the 3-Bark Rule, but somehow stumbled through that as well.

The years passed and we moved to a new home in the countryside where she had 25 acres to roam.  There was abundant wildlife, things to sniff, adventures and explorations to experience, and she lived a wonderfully fulfilling and happy life until a medical crisis took her from us.

Now that I have a better understanding of the puppy socialization process I can look back and see that we provided her with a vast array of experiences while her brain was developing, making them each wonderful and fun adventures.  As she progressed through adolescence into adulthood, she never experienced any behavioral instability or difficulties.  We provided her with the tools she required to navigate through a lifetime among human beings, and all the strange things we do.

Samantha’s only failure was in her hips, and we lost her at twelve and one-half years of age.

She was bred from good stock, two generations of behaviorally healthy Labradors.  I knew them all, and met Sam when she was still in her mother’s care.  I treasure a photograph in which I am lying on my back, with puppy Sammy sleeping on my chest.  That was the beginning of the bonding process and she loved sleeping on me until the end of her days.

My advice to puppy parents is simple.  Training is necessary and beneficial, and socialization is crucial.  Invest your time and energy into those initial short weeks, and you will reap the benefits for many years to follow.  The end result will be a long and happy life with your canine companion, and memories which may compel you to write about her, decades after she has gone. 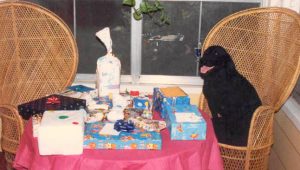