The original title of this post was “I’m Broke, But My Dogs Are Fixed!” Sadly, that is no longer the case. I still am broke, only like all good short stories we read in school, this one took a surprising turn that I would not have predicted.

September was a busy month! Busy at work and then busy transporting  three senior dogs to and from the vet clinic that is 20 miles from my house. But the good news was that  everybody was doing great or on the road to recovery! One can’t ask for more than that with a houseful of elderly dogs, so I looked forward to writing (rather than revising) this post) to sharing our adventures. I hoped to write of success. Instead I am writing in appreciation of who remains and who is gone. 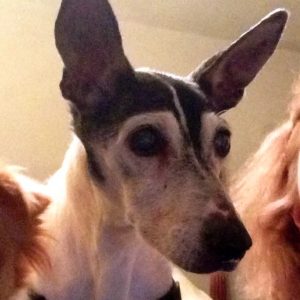 Zip celebrated his sixteenth birthday September 5, receiving a diagnosis of supraventricular tachycardia. My veterinarian consulted with a cardiologist at the University of Tennessee-Knoxville who recommended the Class IV drug diltiazem, a calcium channel blocker. The loading dose was twice daily and now is three times a day.  Thankfully, I can take a late lunch break from my job that allows me to keep Zip close to an eight-hour schedule with this drug. His other heart meds are twice daily every 12 hours. Keeping that sort of schedule improves Zip’s overall demeanor and has virtually eliminated his syncope episodes!

With the cooler weather I could walk Zip around the block in the evening with his best wire fox terrier buddy, Trevor. Our walks were slower, but the sniffing time was rewarding for both dogs after a day spent sleeping inside.

It is strange to say that Zip is better now than he was a year ago or even six months ago, but it’s true. His demeanor is different, and when we visited the vet clinic with Trevor for a recheck, our vet remarked on how well Zip appeared and later on how strong his heart sounded.

Rather than going to the swinging door that separates the receptionists from the waiting area, Zip wandered down the hall to the doorway to gain access to receptionists’ area and greet his vet who happened to be standing back there. Please note that there were no other clients in the clinic waiting area so this “loose leash” protocol was okay and not disruptive to others.

Also with me for a recheck was Phoebe, an 11-year-old tri-colored chihuahua mix my late mother rescued from animal control. I call Phoebe my chi-chiweenie, because she must have a double dose of chihuahua in her, but then, she might have a small dose of Jack Russell with that dachshund too. 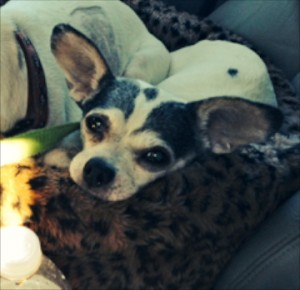 Phoebe recovering from forelimb paralysis after a brachial plexus injury

Phoebe had suffered from forelimb paralysis earlier in the month. The vet was concerned that Phoebe might have a tumor on her brachial plexus, the nerve sheath that runs through the neck. I felt like her problem was trauma related, a result from leaping off the high bed I share with my dogs.

I remembered Dr. Nancy Kay’s “Medical Advocacy 101” in her book “Speaking for Spot” when I explained to my vet that I preferred to treat Phoebe symptomatically rather than spend $1,200 for an MRI to diagnose the problem. I truly was more concerned that another of my dogs would have a crisis and I would be at a loss financially to pay for treatment. My vet listened and prescribed dexamethazone to treat the inflamed nerve sheath. Phoebe got better and continues to improve.

And wouldn’t you know, the mention of a potential crisis in my household of old terriers is enough to trigger one! I came home around midnight after working late and noticed what looked like bloody urine on the dog bed in the hallway. I was so tired that I filed that away under, “Oh, rats, somebody has a UTI,” and tumbled into bed asleep before I hit the pillow.

The following day, I happened to get off at my regular time and noticed my wire fox terrier Trevor walked uncomfortably outside. Upon closer inspection I saw with horror that he had prolapsed his penis! This self mutilation had not occurred in the last several years after I had changed Trevor to a grain free diet. I also learned through trial and error that he also required a sugar-free diet as well as he otherwise was prone to yeast infections in his prepuce.

After a long weekend spent at the vet clinic, hoping that the penile swelling would subside, the option of reconstructive surgery on Trevor’s urethra looked like the best option. I was relieved that I had said no to the MRI for Phoebe as I could afford this procedure for Trevor. Clinically, my 14-year-old wire fox terrier was in good shape. My vet assured me that Trevor’s heart and lungs sounded good. In an effort to avoid additional costs on bloodwork, he masked Trevor down with sevorfluorane as the recovery time was quicker than isoflurane. 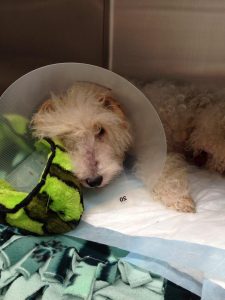 When my vet called to update me on the outcome of Trevor’s procedure, he remarked on how quickly Trevor woke up. That evening when I drove out to the clinic to visit Trevor, I could tell he felt better. He even walked outside the clinic with me to relieve himself.

Nothing seemed to stop Trevor for very long, although removing his catheter initially diminished his urine flow. The vet simply inserted another catheter a few days later that he left in another five days to allow the surgical site to heal, creating a fistula that would allow a clear flow of urine.

We got through that and my vet went on  a week’s vacation. I had a recheck appointment scheduled for all three dogs on October 14. Life was good. The Wednesday night prior to that appointment though, Trevor did not have the energy to walk around the block with Zip and me. I left Trevor at home and walked Zip.

I called the clinic that following morning and set up a “drop off” appointment for Trevor. Feeling like an overprotective parent who might be imagining ailments I simply told the receptionist over the phone, “Trevor just isn’t right. I know we have an appointment scheduled for Tuesday when his regular vet back from vacation, but I really would feel better if one of the other vets could see him in the meantime.”

When Trevor’s attending vet called me after examining Trevor, he said, “Trevor has a grade 3 to 4 heart murmur. I also detected arrhythmia every 10-12 beats.” Because the vet did not sound too concerned, I failed to pick up on the severity of what he was saying even though Zip has a grade 3 heart murmur and arrhythmia as recently diagnosed. I asked for a course of action and he recommended lasix, enalapril, and Vetmedin, the same drugs that have kept Zip alive for more than a year. The follow-up appointment on Tuesday would let us know where to go from there.

I picked up Trevor after work Friday. The tech who brought him out to me and who had cared for Trevor during his stay a few weeks earlier also remarked that he did not seem his usual self and had slept most of the day.

Trevor ate his special meal of rabbit and a rehydrated base mix at the house. He took his meds and I washed the green dinner from his face and eyes. He seemed to enjoy the special attention when normally he would go off in search of Snakey, his favorite squeak toy.

At bedtime I tried to get Trevor to sleep on the high four poster bed I share with the rest of the dogs that has a wonderful Tempur-Pedic mattress that we all enjoy lounging on awake or asleep. It was too hot for Trevor. After his massage, he wanted down from the bed. I carefully put him down on the dog bed in the hallway outside my bedroom. He settled in for the night. Shortly afterwards, I turned off the light to go to sleep. Zip was beside me and Phoebe snuggled up around my neck like a cat.

The next morning when I woke and walked in the hall there lay Trevor dead! I squatted down and stroked his body, still and cold.  I had not hear any struggle in the night, nor the first bark or whimper. Sudden acute right sided congestive heart failure is what my vet said a necropsy would reveal.

Trevor had left this earth as I told a friend he would leave the agility ring…on his own terms and when he wanted to go.