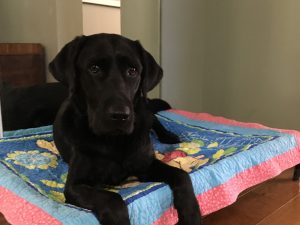 A newly published study finds that dogs pay attention to both the way we talk to them and to what we say. Alex Benjamin and Katie Slocombe’s ‘Who’s a good boy?!’ Dogs prefer naturalistic dog‑directed speech looked at what they term “dog-directed speech,” or DDS, which is similar in tone and affect to baby talk. Their canine test subjects were all adult dog guests of a boarding kennel whose humans gave permission for their participation.

An earlier study had played recorded human voices using baby talk and regular speech. The content of the speech was supposedly of interest to dogs: greetings and expressions of “good boy!” and “come here!” Puppies in this study showed greater interest than adult dogs. The earlier study had serious flaws, though, primarily that the dogs heard the voices while alone in a room. It’s not surprising that adult dogs didn’t respond to a disembodied “come here” or praise.

Benjamin and Slocombe’s study is far more respectful of canine intelligence. While they also used recorded speech, so that all dogs got the same stimuli, a matching researcher (gender-wise) was in the room and the dogs were able to approach and interact with the human. In the first experiment, the stimuli were:

Each trial started with simultaneous dog- and human-directed speech so that dogs would not approach the first or last speaker.

Dogs were more likely to look at, approach, and interact with the researcher who was associated with the DDS than those speaking in normal pitch and register.

A second experiment attempted to determine whether dogs had a preference for content of speech. It used:

The dogs showed no significant difference in which speaker they preferred. The researchers conclude that, when content and tone don’t match, the dogs were equally indifferent (or equally interested).

The dogs showed the most interest in high-pitched, emotional speech directed to them, with relevant content. What does this tell us? These results could mean that:

I think there are additional layers that develop as a specific human builds a relationship with a specific dog. I’ve always talked fairly conversationally to my dogs, and they do respond to relevant phrases and questions when I say them in a “normal” tone. I also use DDS (blush). I believe that dogs learn to read their humans and are able to tell — with a familiar person, though not necessarily with a researcher — which speech is relevant to them, regardless of tone.

I also think that it’s about time more people studied communication with dogs!