Some dogs run and hide at first sight of the vacuum cleaner or unleash a barrage of barking, lunging and biting at the dreadful thing. Others quickly identify the vacuum cleaner’s lair and the fear response begins as soon as the person reaches to open the closet door. Cleaning house soon becomes stressful for dog and owner alike.

Imagine what a vacuum cleaner appears like from a canine perspective. Dogs are conscious of height, size and elevation as it relates to their sense of security. With more sensitive hearing than humans the high pitched motor may hurt their ears, and they are far more responsive to objects in motion than we are.

When dogs challenge one another they stare directly into the eyes of their antagonist, puff out their chest and rise up in posture, trying to look larger and more intimidating. A direct frontal approach only increases the threat.

Picture little Bowser looking up at a large and strangely configured thing that moves unlike any animal previously encountered and has a long snakelike tail. Suddenly it utters a loud high-pitched persistent roar…while the body puffs up to unnatural size. 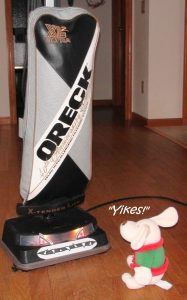 Poor Bowser feels he is being attacked by the legendary Oreckosaurus Rex and retreats to a safer spot, only to be threatened repeatedly as the monster pounces and retreats in relentless pursuit, glaring with eyes that never blink.

You may simply put your dog in the yard or in distant room with a tasty treat or favorite toy so you can clean your house while your dog is not exposed to the scary stimuli. Many people will find this the easiest choice but it does not address the fear.

The other option is to engage in a series of exercises that change how your dog feels about the vacuum cleaner, employing classical counter-conditioning. Rather than avoid the problem, it actually fixes it.

With three Labradors in my home shedding hair like year-old Christmas trees shed needles, house cleaning was a daily chore. Newly adopted Gandhi was terrified of the cleaner and transformed from an 85-pound Labrador into a terrified chicken before my eyes. His new home was supposed to give him comfort, not daily scares.

First, I set the vacuum cleaner in the living room and left it there a few days. I moved it every other day to generalize that it was simply a part of the environment like a lamp or a chair…and as harmless as the growing clumps of dog hair piling up everywhere.

Then I started placing treats on parts of the cleaner when Gandhi was not present. When he returned to the room he discovered the previously scary thing had become a fountain of goodies. Great Scott, what good fortune!

After a few days I moved the vacuum cleaner to the middle of the living room and practiced basic obedience training within sight of it. Gradually we moved closer, then further away, and closer again. By that point Gandhi was comfortably approaching the cleaner and responding to his training cues.  I rewarded him by placing treats on the machine.

The next step was to turn on the vacuum cleaner motor. While the motor ran I practiced with Gandhi in a different room. Gandhi was fine with the sound of the cleaner in the distance and was able to work with me and take treats. So far so good.

Over the next few days I gradually moved Gandhi closer to the vacuum cleaner while the motor was running and began placing treats on the cleaner. He learned to cope with the sound of the machine and showed no signs of stress as he claimed his meaty treats.

Moving the vacuum cleaner with the motor running was the final step and I began by pushing the cleaner away from Gandhi very slowly with one hand, while offering treats as far away as possible with my free hand. Each time the cleaner moved, Gandhi got a treat. If he had been too afraid I would have asked my wife to move the vacuum while Gandhi and I worked at greater distance.

Jake and Buddha had already learned to enjoy the vacuum cleaner and it took only a couple of weeks to convince Gandhi that Oreckosaurus Rex was tame after all. My only problem then was in getting the dogs to move out of the way each time I had to clean up after them.

Great Scott, I think I created a monster!