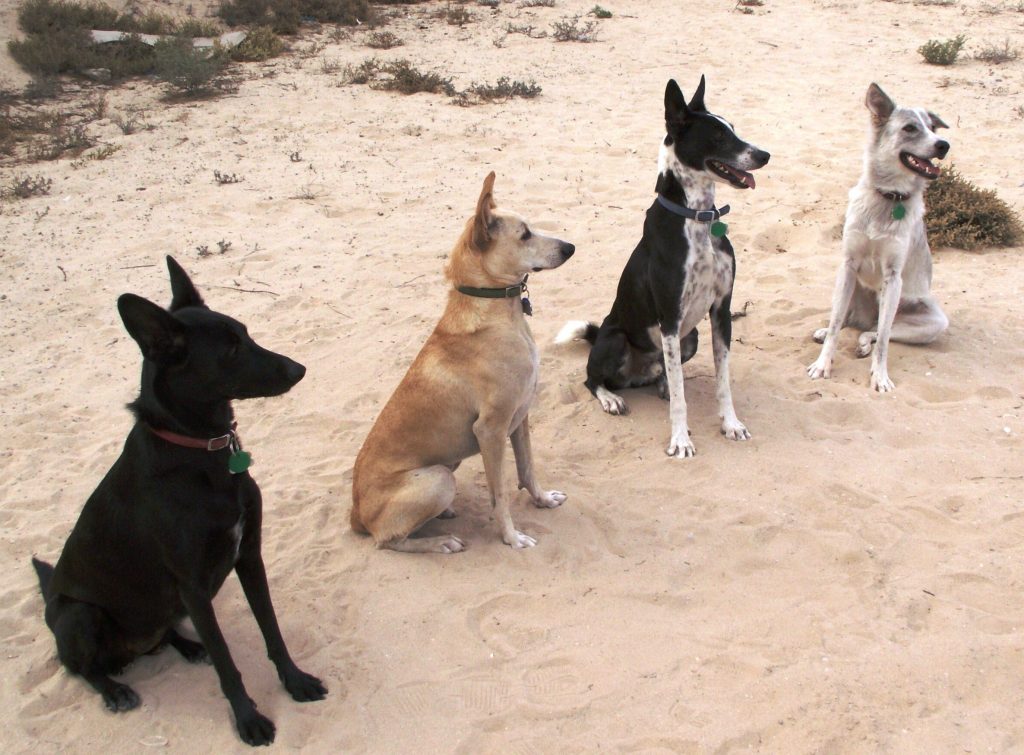 A study that was published recently by an Oregon State University researcher compared wolves with dogs … and many people reading the conclusions appear to have understood the study to mean that we teach dogs to be stupid.

The study tested pet dogs’, shelter dogs’, and wolves’ ability to open a container that had sausage in it. The dogs mostly sniffed around, then sought help from the nearest human. The wolves tried harder to open the container. The dogs and wolves were all tested under two conditions: alone and with a familiar human present but “neutral” — not interacting. All the wolves succeeded; few dogs did. Anyone who failed in both conditions was given an additional opportunity, this time with the familiar human offering encouragement (but not help).

The dogs, both pets and shelter dogs, spent far more time looking at the human (when one was present) than interacting with the box.

In the articles I’ve read discussing the study, outside researchers are quoted suggesting that this indicates that we’ve taught dogs not to think for themselves, that we’ve infantilized them, and even that we teach them to be stupid. One person did point out that many dog owners teach dogs not to open food containers, so they could simply be following the rules.

A New York Times article focused on the fact that the dogs looked at humans — seeking help, rescue, guidance? Wolves tend not to look at humans. The writer commented that the look can be interpreted as “loving or slavish, inquisitive or dumb.” Hard to tell, especially when the commenter did not actually see the dog’s expression or body language.

Dogs and humans have spent thousands of years building relationships and cooperative partnerships together. Wolves and humans have not. Even a “socialized” wolf, as these were, is still a wild animal, not a domestic pet. It makes sense that when presented by humans with a very human problem, dogs will tend to seek human assistance in solving the problem. It is equally natural that wolves, having no interest in partnerships with humans, would not.

I don’t think that this reflects on either species’ intelligence in any meaningful way. Comparing intelligence across species based on human-centered criteria that were defined and interpreted by humans is meaningless. The dogs’ and wolves’ reactions do illustrate the vast differences in the culture and social inclinations of each, as well as their adaptation to their relative environments.

Keeping all of that in mind, though, I believe that training can teach a dog to develop his innate problem-solving abilities — or inhibit that development. If we want thinking, problem-solving dogs, we need to use training methods that encourage them to make decisions, show initiative, use their abilities, and even make mistakes.

Obviously, any training approach that punishes mistakes or demands strict compliance with expectations defined by humans won’t teach a dog to think for himself. “Old school” training that demands instant obedience and a precise response (defined by the trainer) to each command does the opposite of encourage thinking. In fact, trainers like William Koehler and Konrad Most explicitly stated that they didn’t want the dog to think, only to do what was asked.

But fewer and fewer people train that way anymore. Training that gives dogs a foundation skill set, then expands on it, educates dogs who can solve problems — and who are willing to try. In my early days of service dog training, I learned that, once a dog has mastered a basic set of skills, that dog can learn to understand concepts and goals. From learning to pick up a specific item that I point to, a dog can easily learn to identify items by name, search for them, and bring them — even if the item has rolled under a chair or table. Only when the dog cannot physically get to the item (it’s too high up or fell behind the bookcase, for example) will that dog ask for help. Even then, the dog will usually try to communicate that he has found the item and needs assistance getting it.

Teaching dogs to build their problem-solving ability is only the beginning. We can also teach dogs when it is and is not appropriate to use their skills or engage in “natural” behaviors, such as picking up found food items or grooming themselves. Admittedly, this works better with some individual dogs than with others. Not unlike humans, (most) dogs can understand that different rules apply in different situations — working dogs behave very differently when they are on and off duty, for example. And, germane to this study, the pet dogs and the shelter dogs who’d spent any time in homes had likely been taught not to open food containers. Some might even have been punished for taking humans’ food or attempting to open food containers. This could certainly influence their willingness to try to open the box — or, at the very least, make them likely to look at the familiar human standing nearby and “ask” (wordlessly) for permission.

Far from teaching our dogs to be stupid, motivational trainers teach dogs to fully develop their considerable intelligence. We also teach them how and when to use their skills — and when to seek assistance or permission.

For more about the study, see these articles:

OSU study: Have we made dogs lazier or dumber than their ancestor wolves?, The Register-Guard, Oct. 2, 2015

The study, “When dogs look back: Inhibition of independent problem-solving behavior in domestic dogs,” by Monique Udell, was published in the British journal Biology Letters on Sept. 16, 2015.