Tell Us What You Really Think

By Susan Nilson and Angelica Steinker 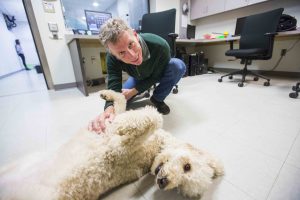 Dr. Gregory Berns (above) is fascinated by what dogs understand from human language: “Do words have meaning to them?, he asks. “If I say ‘ball’ do they picture a ball in their mind?” © Emory University

Amongst dog trainers and enthusiasts, Dr. Gregory Berns is probably best known for his pioneering work that specializes in the use of brain imaging technologies to gain a greater understanding of canine motivation and decision-making. For the last three years, Berns’ team at Emory University in Atlanta, Georgia have used positive reinforcement to train a group of volunteer dogs to remain still during functional magnetic resonance imaging (fMRI)*. As the dogs are awake during the entire fMRI process, Berns and his colleagues are provided with vital information as they work to decode what dogs are really thinking. The data they have collected, and continue to collect, reveals intriguing insights about how the canine brain works.

In the study, ­ (Prichard, Chhibber, Athanassiades, Spivak, & Berns, 2018), Berns and his team used awake fMRI in 19 dogs over a series of three experiments to measure reward-related learning of visual, olfactory, and verbal stimuli. They found that visual and olfactory associations “resulted in the fastest learning, while verbal stimuli were least effective, suggesting that verbal [cues] may be the least efficient way to train dogs.” The researchers explain that, “[a]lthough dogs may attend to verbal stimuli, olfactory and visual stimuli likely have greater importance in the dog’s assessment of its physical and social environment and when interacting within such environments” and that their results, “showing greater salience for olfactory and visual stimuli in the amygdala, are concordant with the dogs’ behavioral preferences in their natural surroundings.” (Berns et al., 2018). Given the human propensity for verbal communication, we were interested to find out Dr. Berns’ views about whether training protocols based on verbal cues, while “optimal for humans,” may not – from a dog’s perspective – necessarily be the most effective way to learn.

Verbal vs. Visual
BARKS: What are the implications of the study’s findings for dog trainers, given that verbal cues, typically, are currently a mainstay of dog training?

Gregory Berns: We found that olfactory and visual associations – as measured by changes in brain activation – occurred with fewer repetitions than verbal ones. The olfactory preference should come as no surprise, but the visual over verbal preference suggests that the use of verbal cues may be more for the human’s benefit than the dog’s. Of course, most people use visual signals in conjunction with verbal cues, and that may be the best route.

BARKS: What about human-canine communication in general – should we be trying to re-evaluate the way we communicate with dogs, given the human preference for verbal communication? How can we capitalize on this research to make our training more efficient and improve our communication with the dog?

GB: Humans are verbal creatures, and although we talk to our dogs, that does not mean they understand what we’re saying, at least not like we understand each other. When it comes to verbal communication, the brain research is showing that although dogs can learn to discriminate certain sounds and some words, their mental representation of what the words mean may be quite different than ours. For example, humans are very noun-centric. We name everything. Dogs, however, may have very little use of nouns. Instead, they may be verb- or action-centric. So, when they hear “ball” they may actually think, “get ball.” Because dogs do not have the neural real estate for language processing, it is imperative that humans use their words concisely and consistently for dogs to understand them. Speak the dog’s name, followed by a one or two-word cue. Anything more than that is a distraction and will only serve to slow down learning.

I think that there is growing evidence that there may be critical periods of learning for dogs. They are more apt to learn verbal cues (or any tasks) when they are young. Chaser, the famous dog who knew 1,000 words, began when she was just weeks old.

BARKS: In terms of visual stimuli such as the objects used in the experiment, do you think that a hand signal, commonly used in dog training, would have the same effect on the rate of learning? If not, how would it be different?

GB: We have used hand signals in some of our experiments, but we have not directly compared hand signals versus objects. In one case, we began with hand signals but found that they seemed to be too distracting to the dogs.

Most dogs have been acclimated to the importance of human hands, if, for no other reason, because hands provide food and petting! So, it is possible that a dog may be paying attention to a person’s hands because they expect something to be dispensed, and this could interfere with learning something unrelated. In this case, a neutral object could serve as a bridge.

Scent and Sniffing
BARKS: Given the apparent preference for olfactory and visual stimuli as demonstrated by this research, how can we apply this to a dog’s everyday life, e.g. the importance of sniffing when out for walks, the use of nose work in training, etc.?

GB: Yes, letting dogs sniff is important for their mental stimulation. Nose work may not be for everyone, but it could be something fun and different for people to do with their dogs, even at home. The dog needs to learn at least one target odor, like lavender, and then the game is to find where it is hidden.

BARKS: Do you think this research could be used in other contexts, e.g. using a scent cue to calm a fearful dog (as opposed to verbal reassurance), say during a thunderstorm or vet visit?

GB: Possibly. I’m not aware of any convincing evidence that some odors are intrinsically calming to dogs. So, the scent would need to be previously associated with a calm, positive emotional state, which would need to be maintained through repeated training. You wouldn’t want the scent to become associated solely with the aversive situation.

BARKS: Can you talk a bit about odor concentration and vapor pressure, their application in the study, and/or relevance to the study’s findings?

GB: We used concentrations of a few parts per million, which was barely detectable to humans in the bore of the MRI. This was likely overkill for dogs, but we wanted to make sure our apparatus was working.

Theory of Mind
BARKS: How relevant was object color (i.e. the pineapple and flamingo) in this study, if at all? Would this warrant further study?

GB: To make it easy for dogs to discriminate between objects, we try to use things that are as different from each other as possible. This means different sizes, shapes, textures, and colors. Humans tend to categorize things primarily by shape, but this may not be the case for dogs. In fact, we’re not really sure what the most salient features of objects are to dogs. Texture and smell may be the most important.

BARKS: Why was it important that the dogs used in your studies were positively trained to duration target (ie. lay still in the machine on cue)?

GB: Because we want the dogs to have fun and enjoy their experience in the MRI. Sometimes they don’t want to leave!

BARKS: If anything were possible, what is the question you would ask of the dog (i.e. what do you really, really want to know about the way they think or how their brains work)?

GB: I have so many. I’m still fascinated by the question of what dogs understand from human language. Do words have meaning to them? If I say “ball” do they picture a ball in their mind? I’m also very interested in whether they have “theory of mind,” which means understanding that a person (or dog) is a thinking, sentient being. And do dogs have empathy? I know that many people implicitly believe these things to be true about dogs, but we really don’t know.

About Gregory Berns
Gregory Berns MD Ph.D (gregoryberns.com) is the distinguished professor of neuroeconomics at Emory University in Atlanta, Georgia, where he directs the Center for Neuropolicy and Facility for Education and Research in Neuroscience. He is also a professor in the Psychology Department and a founding member of the Society for Neuroeconomics. He is the author of Satisfaction: The Science of Finding True Fulfillment, Iconoclast: What Neuroscience Reveals About How To Think Differently, named one of the best business books of 2008 by Fast Company, How Dogs Love Us, which became a Wall Street Journal and New York Times bestseller, and What It’s Like to Be a Dog which, according to Dr. Brian Hare, author of The Genius of Dogs, “will establish Berns as one of the most skilled neuroscientists of our day, as well someone with the intuition that understanding other animals will lead to greater insight and knowledge about ourselves.” Dr. Berns is also co-founder of Dog Star Technologies – a company using neuroscience to enhance the dog-human partnership.

This article was first published in BARKS from the Guild, March 2020, pp.28-30. For more great content on all things animal behavior and training, you can sign up for a lifetime, free of charge, subscription to the digital edition of BARKS from the Guild. If you are already a subscriber, you can view the issue here.

About the Authors
Susan Nilson BA (Hons) DipCABT PCBC-A is editor of BARKS from the Guild (barksfromtheguild.com) and a Reuters-trained journalist with over 10 years’ experience in print journalism in Europe, Asia and the Middle East. She also studied feline behavior under the tutelage of Prof. Peter Neville at the Centre of Applied Pet Ethology (COAPE) in the United Kingdom and completed her diploma in companion animal behavior and training with COAPE in 2005. She is also an accredited professional canine behavior consultant through the Pet Professional Accreditation Board. In 2018, she co-authored Pet Training and Behavior Consulting: A Model for Raising the Bar to Protect Professionals, Pets and Their People (petindustryregulation.com).
Angelica Steinker PCBC-A owns and operates Courteous Canine, Inc. DogSmith of Tampa (courteouscanine.com/Florida), a full service pet business and dog school specializing in aggression and dog sports. She is the national director of training for DogSmith Services (dogsmith.com), and co-founder of DogNostics Career College (dognosticselearning.com).