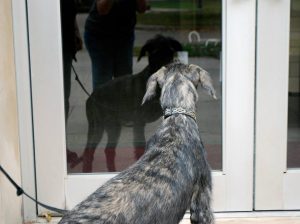 The Mirror Test: While dolphins, orangutans, elephants and orcas are considered self-aware because they pass the mirror test, dogs do not seem to recognize the image in the mirror as their own reflection. But the test has its shortcomings. Researchers have devised other tests that suggest dogs do possess a sense of consciousness © Peggy McMillan

Most of us have had that “ah- ha!” moment when we look at a dog and suddenly see more than a drooling collection of fur, bright eyes and animals instincts; when we realize here is a creature of another species who has feelings, intelligence, a sense of fair play and is very much self-aware. We are no longer looking at a shaggy lump, and this is no fanciful talking cartoon character. We are looking into the eyes of “The Other.”

It may be a gradual realization. It could have come as a shattering, cognitive leap, but there is no going back after that. We can no longer in good conscience treat a dog with anything less than humane respect.

For most of us, this is why we turned to positive training. Dogs need help learning our rules, but so many of today’s popularized training techniques are based on fear and pain. Positive training rewards our pupils for doing the right thing. It is a dialogue that encourages them to think and want to bond with us.

However, even today, too many dogs are often still treated as mindless chattel, beaten, abused and abandoned on a whim. How do we help end this? What can we do to help others see the compelling creatures that dogs are? How do we turn on the lightbulb? Obviously, through education and example.

Fortunately, dogs are in nearly 50 percent of American households today. It has become in vogue to treat dogs with the best veterinary techniques and opportunities to play and compete. Peer pressure is improving the lives of many dogs because progressive dog owners are hungry to learn. Science in the last 10 years has uncovered more
about dogs than we knew in the last thousand years.

For years, researchers ignored the domestic dog because dogs are so familiar. What could we learn? After all, dogs are simply dumbed-down wolves sitting at our feet waiting for table scraps, right? But when science turned its attention to the dog, one of nature’s most successful evolutionary stories began to unfold.

Today, we know that the dog is more like us and more attuned to man than any other in the animal kingdom. They have learned to read us like a book. Dogs were experts on humans long before we took a closer look at them.

Trying to convince someone that a dog is more than just a dumb animal? Tell them about the work of Brian Hare and Vanessa Woods, authors of The Genius of Dogs: How Dogs are Smarter than You Think, and one of the lead scientists behind Dognition.com, a website that lets dog owners take part in an extended study on dog intelligence.

Hare says dogs learn human words the same way children do, through the principle of exclusion. They recognize that a number of objects are labeled with a word sound. When a new object is introduced and a new sound is spoken, that must apply to the new object.

Bonobo monkeys, dolphins and elephants—all recognized as highly intelligent species—cannot do this. It was thought only children labeled objects with sounds until dogs were tested. A border collie named Chaser demonstrated a working vocabulary of more than 1,000 words.

Advances in brain scanning techniques help us see what is actually going on inside a dog’s mind. The MR Research Center in Budapest, Hungary concluded after a series of tests that dogs see us as family.

A group of dogs was trained to lie still in an MRI machine, and their brains were scanned for processing odors, because scent is one of the dog’s most important senses. Their owner’s scent caused the reward centers of the subjects’ brains to light up. Happy sounds made by their owners caused a similar response in the subjects’ reward centers.

Researchers Victoria F. Ratcliffe and David Reby reported recently in Orienting Asymmetries in Dogs’ Responses to Different Communicatory Components of Human Speech, published in online science journal Current Biology (DOI: 10.1016 /j.cub.2014.10.030), like humans, dogs use both the left and right hemispheres of the brain separately, but in sync, to analyze spoken language. The left side of the brain extracts the meaning of the word-sounds while the right side gauges the speaker’s emotions.

Subtle and complex actions are going on inside the brain of a dog when we speak. Scientists in dozens of new studies have devised innovative ways to get inside the minds of dogs and explore and record different facets of intelligence.

This is important in convincing skeptics, or those unfamiliar with canine body language who look at a dog, see his natural poker face, and assume there is nothing going on between those shaggy ears. In fact, evolution has trained dogs not to show their intentions when there are others around competing for the best bone or spot on the couch.

Most dogs will not naturally look you directly in the eye, because in dog culture that is considered provocative and rude. Skeptics read the averted glance and neutral expression as proof that dogs are simply “dumb animals.” Science is now shining a light across a dog’s mental landscape, which is anything but “dumb.”

Is intelligence the only important measure of a dog’s worth? One of the more contentious questions now being asked is, “Are dogs self-aware? Are they conscious creatures?” Orangutans, chimps, elephants, dolphins and orcas have all demonstrated self-awareness by passing the mirror test.

Developed in the 1970s, researchers discretely place a colored dot on the subject’s forehead. The animal is then shown a mirror and his reaction is observed. A “pass” is recorded when the animal looks at himself, adjusts his body to get a better view or tries to remove the colored spot. Doing so is considered a sign that the subject knows the reflection is his own and is able to step outside himself and see himself as an entity separate from his surroundings. He can imagine how others might see him and knows he has an effect on others around him.

Self-awareness is the foundation for ethics such as trust, affection and generosity. Dogs, however, fail the mirror test miserably. They may bark at the image in the mirror, offer play bows, or run around excitedly, but they do not seem to know they are looking at themselves.

Humans are not born able to pass the mirror test, either. It is not until they are 18 to 24 months old that infants’ brains develop to the point that they recognize their own image. Gorillas also fail the test. Direct eye contact is considered aggressive to gorillas. Yet one gorilla, Koko, is famous for her use of language. Koko can recognize more than 2,000 words of spoken English and respond with sign language using a vocabulary of more than 1,000 words. Koko describes herself as a “fine gorilla person.” She is plenty self-aware. The test itself failed.

Dogs may fail the mirror test, but they demonstrate a range of ethical behavior simply when they play together. The play bow signals that what follows is not aggressive but is just for fun. Faster, stronger dogs handicap their efforts so smaller dogs can join in and not be hurt. If a dog bites too hard, he (usually) returns to apologize and gives another play bow, asking that play continue. The offended party accepts, forgives, and the play goes on.

Berns focused on the caudate nucleus, a region of the brain that plays a key role in anticipating things that give us pleasure like food, music and even beauty. The caudate nucleus lights up in dogs when they pick up the scent of their owner and when their owner steps into view. According to Berns, dogs display an ability to experience positive emotions like love and attachment.

Berns writes that the evidence from brain scans means we must no longer see dogs or higher mammals as ‘dumb brutes.’ They are aware. They feel. They act ethically. They deserve rights to protect them from abuse, puppy mills, dog racing and the slaughterhouse, he says.

An international group of prominent scientists agreed with Berns when they attended a conference at Cambridge University in 2012. Citing rapid advances in the field of consciousness, the Cambridge Declaration states that the proof is, despite differing brain structures, animals such as birds, mammals and the octopus, show a level of consciousness as meaningful as that of humans.

It is an argument that has moved from the laboratories and scientific conferences and into the courtroom. In December 2014, in a groundbreaking decision, a court in Buenos Aires ruled that an orangutan named Sandra was entitled to legal rights enjoyed by humans, and her 20 years of captivity in a zoo damaged those rights.

An attorney for the animal rights group acting for Sandra argued to the court that Sandra’s life in the zoo was the equivalent of a person spending 20 years in solitary confinement. The court ordered Sandra be released to an animal sanctuary.

The tide may be turning. Judges have begun to recognize what dedicated pet owners have long known—our dogs are remarkable, intelligent, feeling companions and deserve our protection. It is time to spread the word to the general population and turn the lightbulbs on.

This article was first published in BARKS from the Guild, March 2015, pp.47-49. For more great content on all things animal behavior and training, you can sign up for a lifetime, free of charge, subscription to the digital edition of BARKS from the Guild.

About the Author
Bob McMillan is a newspaper editor and columnist who lives in the foothills of Middle Tennessee with his Irish wolfhound, his new puppy, several rescues and a remarkably tolerant cat.