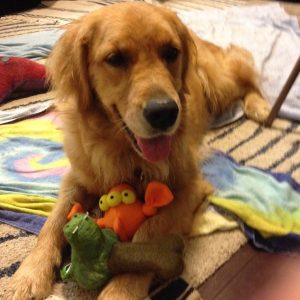 Oxytocin is a hormone that plays a role in social bonding, as implied by some of its nicknames: the love hormone, cuddle chemical, or bliss hormone. It’s also something that dogs and humans share.

Studies published in 2009 found that, when dogs gazed at their owners — you know, that adoring gaze that says, “feed me; I’m yours,” owners had more oxytocin in their urine. This correlates with feeling affection and social connection.

What about the dogs? There’s more to this story. A later study looked at more variables. For example, the oxytocin in dogs’ urine. Did they get the same emotional lift out of the exchange of adoring gazes? The researchers also wondered whether interaction with the humans affected oxytocin in either humans or dogs.

In both studies, dogs and hand-raised wolves were used, as a way to determine whether this was just a canine thing, or whether it really has to do with the dog-human relationship.

First, the study looked at the effects if the person and dog exchanged gazes only, versus when the person also interacted with the dog, talking to her or petting her. No one was given oxytocin in this study; dogs’ and humans’ levels were measured before and after. The dogs and owners who spent the longest time gazing and interacting with each other had significant increases in their oxytocin levels — the dogs’ levels as well as the people’s. The gaze-only dogs and the shorter-gazing couples had small or no increases.

Gazing between wolves and humans, and interaction between them, did not affect the oxytocin levels of wolves or humans.

Taken together, these results suggest, say the researchers, that dog-to-owner gaze as a form of social communication, probably emerged during domestication. It’s a dogs-and-people thing, that is, not a canine thing.

Next, the researchers wanted to know whether increased oxytocin in the dogs led to more of this warm, fuzzy behavior. The researchers administered oxytocin to some of the dogs and saline solution to the rest. Then, the dogs and humans were allowed to gaze at each other, but the humans were not allowed to intentionally interact. If the dogs touched the humans, it The wolves didn’t really gaze at the people.was noted, but the humans were not allowed to respond by petting or talking to the dog. The dogs were tested with their owners and two unfamiliar people.

So, was there a change in the dogs’ behavior if they had higher (administered) oxytocin? There was — but only for female dogs. With more oxytocin, they gazed at their humans for a significantly longer time; the length of their gaze at a stranger wasn’t affected. Male dogs actually gazed at their owners longer if they had not received oxytocin. Not to knock boy dogs, but … maybe they’re just not that into you. The wolves didn’t really gaze at the people.

What this all means — according to the researchers, anyhow — is that a mutually reinforcing loop occurs. They gaze at us, we look back,  everyone feels all warm and mushy and loved, so the dogs — at least, the girls — keep staring at us, to keep this good thing going.

Gazing is important in human social bonding and communication, starting when babies nurse. Lots of research shows that dogs use humans’ gaze as communication — and use their own gaze to communicate with us. And, as I wrote a few months ago on my blog, our dogs actually choose to hang out with us. All that, to me, adds up to a mutual bond that is very rewarding to all of us, including the dogs.