The Aftermath of “Boot Camp”

May 12, 2022 | Animal Behavior, BARKS from the Guild, Pet Guardians, Training 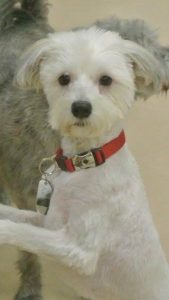 [At the time of writing] Kobe is an 18-month-old terrier cross, who is loved madly by his person, Lizzie. My private consultation session with them is the only one in 10 years that has moved me to tears, right there in front of the owner. It absolutely broke my heart to witness a dog displaying visible signs of anxiety, triggered by hearing very basic and commonly used verbal cues.

Sadly, it would not be the last time I would witness this. There is no doubt about it: there are side-effects associated with aversive training methods. I do not believe, however, that owners who hire such trainers ever truly intend to harm their dogs. I feel it is more a matter of education. Lizzie was only doing what a professional trainer had asked her to do.

I thought long and hard about how to share Kobe’s case for this article. Would I use technical terms and jargon, share my training plan, share segments of Kobe’s pre-consultation form and so on? In the end I felt that Lizzie could tell Kobe’s story best, and that readers could benefit from learning about her perspective.

The following are Lizzie’s words, based on her experience with Kobe.

“I have always loved dogs. When I was a little girl we had a little terrier and since then my heart has always had an especially soft spot for little dogs. After college I settled into a career and bought a house but I still felt a void in my life. I had no doubt that what I was missing was a furry friend of my own.

“I first saw Kobe when I was browsing a local shelter pet website and I immediately wanted to know all about him. I went to meet him and brought him home the same day because the shelter was about 45 miles from where I lived. I knew I wanted him and did not want to make two trips, a decision I soon thought might have been rushed and impulsive.

“Kobe was a hyper, rambunctious terror who barreled his way into my once very organized lifestyle. I was terrified but loved him anyway. My parents had never put our dog in a crate but Kobe had quickly destroyed my couch and a few books off my bookshelf so, within his first week, I went out and got one. I also made an appointment with a groomer friend to get him all pampered and clean. I don’t think he had ever had a haircut. He was very unkempt.”

The Effects of Doggy Boot Camp

“The groomer was part of a veterinary clinic, which also offered day care. When I picked Kobe up they mentioned that he would benefit from some type of obedience training. I completely agreed and was relieved to know there was hope for him to be a “good boy.”

“I did not do my homework and instead forked out a few hundred dollars and packed a bag with some of the new toys we had picked out. He would be gone for a week. I was assured that, after boot camp, I would be able to “enjoy my dog.”

“When I picked him up from boot camp, I watched from a window a demonstration of what he had learned. He responded to all the cues he was given but he seemed different. I cannot describe it. He was not the happy crazy guy I had dropped off. His ears were back and his high tail was tucked between his legs. It was like a teenager returning from boot camp or military school. He had changed.

“When I was asked to come outside, he was so happy to see me. I noticed he had a shiny collar on instead of the cute little one he had been wearing when I dropped him off. It had sharp metal prongs inside, which when pulled, would dig into his neck.

I was very concerned that it was hurting him because he was such a little guy, but I was assured by the trainer that it was very comparable to being picked up by his mother’s teeth. I was given brief instruction on administering “corrections” and was told to not take the collar off for at least eight months.

“The following weeks were rough. I was taught a new way of walking him and it involved yanking the leash anytime he didn’t “heel.” Whenever he acted like a puppy and wanted to stop and sniff, I was supposed to yank his leash and get him to walk at my behest.

“The only time I saw him happy was at the dog park when the leash was off and he could run free. His interactions with other dogs concerned me as they would snip at him when he approached them. I posted on social media about this concern and asked my friends if anyone would be willing to bring their dog so he could have some friends. That is when our life changed.”

“A friend gave me Amanda Ballard’s contact information and said she used a different way to work with dogs. I just could not bear giving him “corrections” any longer. It was not in my nature. When I finally made the call, such a good feeling came over me. The things that she said were so positive. She did not have this attitude of “I’m the boss and the dog needs to know his place.” I loved my dog and thought of him as an equal. I did not want him to be scared of me. I wanted him to be happy and have a good, comfortable life.

“The first session with Ballard was at our house. I was so skeptical that any of the force-free methods were going to work because of Kobe’s rambunctious nature. Ballard proved though, through Kobe’s behavior, that she had the answers we were looking for. When he barked at her and wanted to jump up, she ignored him, waited for him to calm down and then gave him treats. He quickly stopped jumping and barking and I became a believer.

“I told Ballard that Kobe knew some cues and she asked us to demonstrate them. Kobe became noticeably anxious when I gave him the “commands” that the other trainer had told me to use. He paced, began to spin, barked and looked for the closest object to bite. He completely lost focus on what we were doing.

“That was the moment when everything really hit me. I had unknowingly put him through a trauma he should never have endured. We talked about a plan to help Kobe with tears in our eyes. That night I tossed the prong collar into the garbage.”

“The following weeks were filled with rewards instead of “corrections” and I watched my little buddy get better and better, even when doing very complex exercises. I am convinced he gained in confidence during this time. He could do all the tricks and was always so happy to get rewarded.”

“We grew so much closer, working on these kinds of homework assignments, and were proud to show them off to Ballard when she checked in on our progress. The best part was that we successfully taught him to respond to a new vocabulary that did not cause him any anxiety. Sit became “park,” lay down became “plop,” and I also learned a new way to help with his barking.

“I feel very strongly that force-free methods are the only way to train and bond with a dog. So much time was spent undoing the damage that had been done in that one week. So much effort was put into earning back the trust of my new pup.

“I had hurt him unintentionally, as I thought I was doing the right thing. I only wish I would have known sooner that there were more positive methods out there.

“Kobe and I have never been happier than we are right now. I finally am able to “enjoy my dog,” as they had ironically termed it, but only because I know he is truly happy and our lives are filled with mutual rewards.”

This article was first published in BARKS from the Guild, September 2015, pp.32-33

Amanda Ballard is the owner of Halo Dog Animal Behavior Consulting, Inc., and has been working professionally for over a decade with pet parents on animal behavior modification and training, in veterinary clinics, with animal control organizations, and with rescue groups. She is owned by five “Halo dogs” who earn their kibble by helping out with dog-dog reactivity cases.