The Benefits of Keeping Cats Indoors

Some cat owners believe it’s “natural” for their cat to be outdoors, or that their cat won’t be happy unless given the opportunity to roam. These days, most pet cats aren’t as suited to outdoor life as one might think. They are simply ill equipped to successfully navigate the risks and dangers in the modern outdoor world. 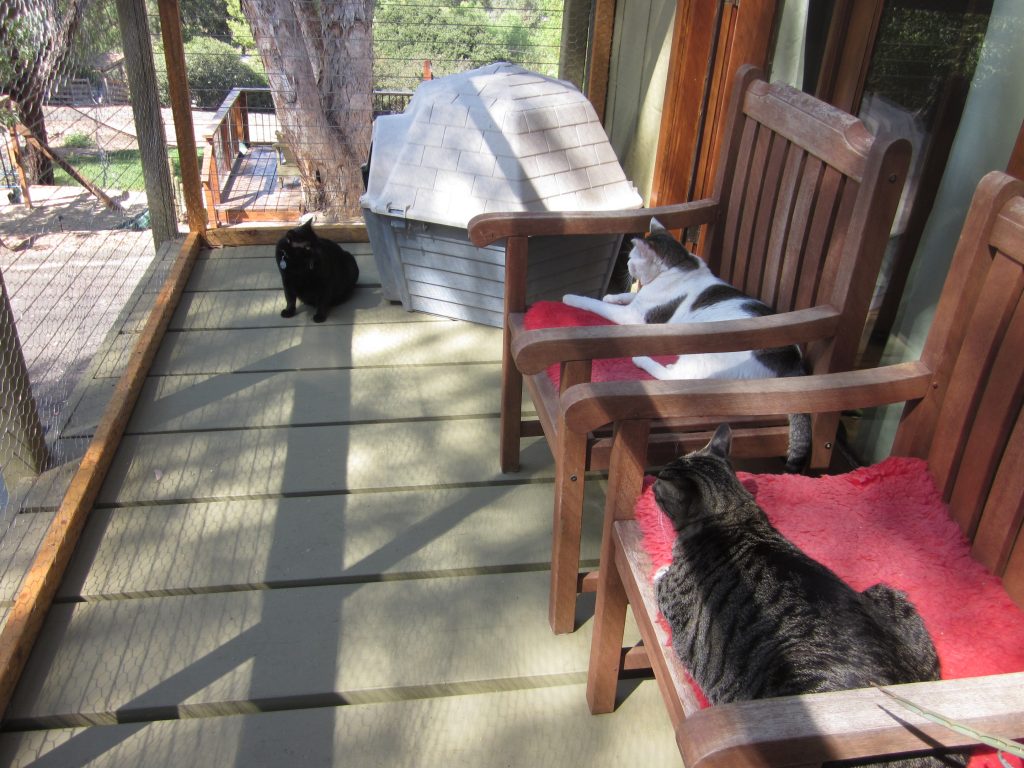 Indoor cats are protected from many threats and potential dangers. Keep this list handy for the next time you’re tempted to let your cat out.

• Diseases and parasites—Outdoor cats are at greater risk of being exposed to rabies. In 2013, almost 5,900 cases of rabies were reported in the United States, and they occurred in every state except Hawaii. The animals testing positive for rabies were primarily raccoons, bats, skunks, foxes, and cats.1 A cat who is bitten by a wild animal and is not up to date on his rabies vaccine may be quarantined for up to six months. If the cat bites a human, the health department may require that the cat be tested for rabies, which would require euthanasia.2

Cats allowed to roam outdoors are also more likely to come into contact with other cats, which exposes them to a host of diseases. The most serious are feline leukemia (FeLV), feline immunodeficiency virus (FIV), and feline interstitial peritonitis (FIP), all of which are contagious among cats and can be fatal. Unvaccinated cats are also at risk of contracting and spreading feline viral rhinotracheitis (herpes virus), calicivirus (a respiratory disease), and panleukopenia, or feline distemper—a highly contagious, deadly disease.

Infestations with fleas, ticks, ear mites, and intestinal worms are also more common in cats who spend time outdoors. According to Stacey Joy Hershman, DVM, Certified Veterinary Homeopath, and Certified Veterinary Acupuncturist, “Severe flea or tick infestation can cause fatal anemia, especially in kittens. Intestinal parasites can also cause anemia or diarrhea, vomiting, emaciation, and dehydration, all of which are potentially fatal, especially in kittens.” Ticks are carriers of diseases that can make humans sick, too, such as lyme disease and babesiosis.

Outdoor cats are also more prone to getting ringworm, a fungal infection of the skin that is extremely contagious to humans and other animals, and can be difficult to eradicate, especially in a home with multiple pets. The fungus that causes ringworm is ubiquitous in the environment and impossible to avoid. 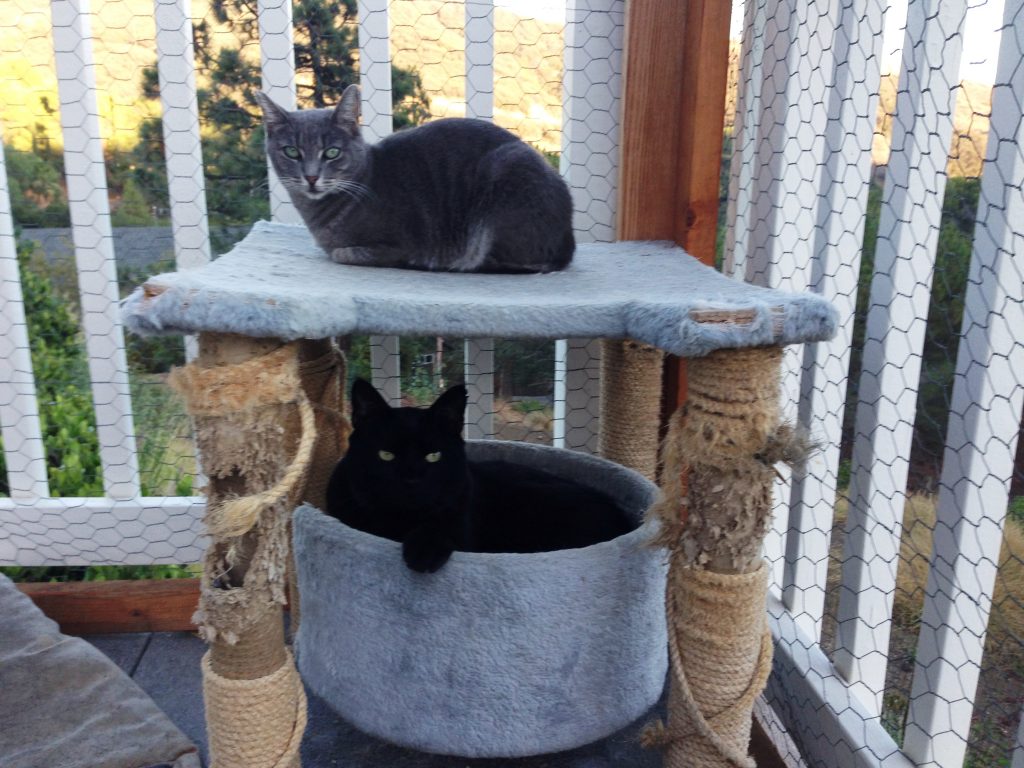 Indoor cats are much safer from predators, parasites and disease

• Predators and other animals—Coyotes are found in every state except Hawaii, and as human development has encroached on their territory, small dogs and cats have become easy prey for them. Foxes, dogs, hawks, owls, and eagles also hunt cats for food.3
Even if a cat survives an attack by a predator, any bite wound to the neck, chest, or abdomen may need to be surgically explored to determine whether large blood vessels, nerves, the trachea, lungs, liver, spleen, or intestines have been damaged. The crushing and tearing of tissues inherent in bite wounds compromises blood flow, which can prevent healing and lead to infection, even if the wound is treated immediately.4
Because of their territorial nature, free-roaming cats often fight with cats and other animals, and they sustain puncture-wound injuries that are difficult to detect because they’re hidden under the fur. Puncture wounds often become abscesses when the wound heals, trapping bacteria that fester below the skin’s surface. Not only are abscesses painful, they cost several hundred dollars at the vet’s office to treat. Left untreated, an abscess can lead to a deep, widespread infection. If the bacteria reach the bloodstream, the cat could die from sepsis.

• Physical injury, trauma, and death—Whether you live in a city or a rural area, the outdoors is full of potential for a cat to be injured or to suffer trauma or death. In cities and other populated areas, cats can die from being hit by cars or falling from a balcony, tree, or rooftop. It gets worse—in more rural areas, cats can get caught in leg-hold traps and wire fencing. No matter how “streetwise” a pet cat is perceived to be, one miscalculation can have drastic results, and the cat could suffer in agony for days before being rescued or succumbing to his injuries.

Everyday chemicals in the environment that might seem benign are highly toxic and harmful to cats, such as fertilizers, pesticides, weed killers, rat poison, motor oil, antifreeze, and ice-melting products. Outdoor cats may also become ill from eating trash, spoiled foods, and poisonous plants. Many communities indiscriminately use trap-and-kill methods in an attempt to control feral cat populations. Even the friendliest of cats might react fearfully when trapped and wouldn’t survive.

• Cruelty—Every day we hear reports of animals suffering and dying miserably at the hands of cruel people. Outdoor cats, especially friendly ones, are at the mercy of every person who sees them. Cats and other pets are often grabbed off the streets and stolen right from their yards to be used as bait in dog-fighting rings, as lab subjects, in the illegal fur trade, or in satanic rituals. Cruel people who don’t like cats also intentionally poison, shoot, strangle, torture, and kick cats, and also dump boiling water on them or set them on fire for “fun.”

• Becoming lost—Although cats are territorial animals, they do roam and can be chased out of their territory and easily become lost. Lost pet cats don’t have the hunting skills necessary to get food. On their own, they don’t have a chance. Feral cats living in managed colonies don’t welcome them into their groups, and if not rescued, they can die from starvation. Even if a lost cat is rescued and brought to a shelter, it has a less than 5% chance of being reclaimed by its owner.5

• Weather and temperature extremes—Unlike dogs, cats have a weak thirst drive—a characteristic that evolved from their African wildcat ancestors. This puts them at risk for dehydration in hot temperatures. In cold temperatures, cats’ sensitive and unprotected ears and paws are particularly susceptible to frostbite, and outdoor cats also die from hypothermia because they don’t have warm, dry shelter.

• Overpopulation—Free-roaming intact animals are one of the main reasons millions of homeless animals are killed in shelters every year. 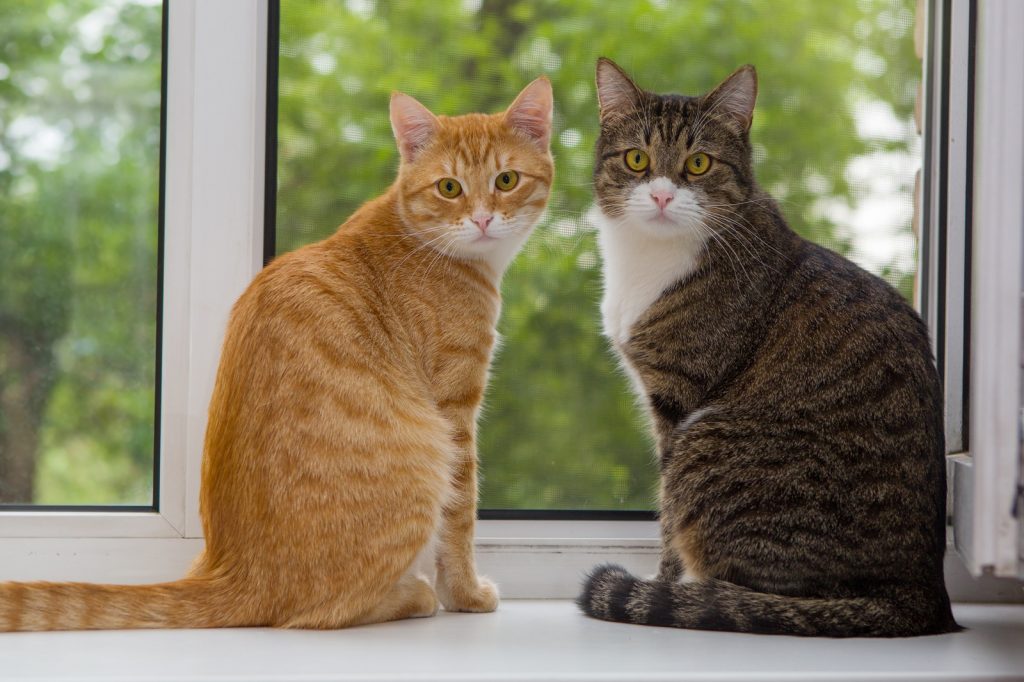 Providing an Enriched Indoor Environment
There are huge benefits to keeping cats indoors. Most importantly, your cat will live a lot longer—indoor cats live more than six times longer than outdoor cats.6

Cats can get everything they need to be healthy and happy—and stimulated—indoors. The key? Providing an environment that fulfills all of their needs. In addition to the basics (food, water, and litter box), cats need the following:
• Areas to perch or a cat tree, preferably near a window
• Regular, interactive playtime
• Quiet, comfortable places to sleep, rest, and hide
• A scratching post or pad
You can also provide cat grass and fresh catnip or, if your cat doesn’t react to catnip, valerian.

Starting on the Right Paw
If you’ve just welcomed a new cat into your family, don’t let him out in the first place. Cats who have been allowed to roam outdoors will want more, unaware of the dangers that await them. Cats can be trained to accept (and prefer) an indoor lifestyle, but this is easier to accomplish if the cat has not already been given the freedom to roam outdoors.

Transitioning an Outdoor Cat to an Indoor Life
Changing your outdoor cat to one living indoors can be done at any time. If you live in a cold climate, making the change in the fall or winter, when he is less likely to want to go outside anyway, can make for an easier transition. Another great time to make the transition is when moving to a new home. The indoor environment of your new home simply becomes your cat’s new “territory.”

If your cat looks longingly out the window or sits by the door and asks to go outside, resist the temptation to give in. Redirect him by engaging him in an interactive play session with a wand toy. Interactive play is vital for all indoor cats, but especially so for an outdoor cat who is transitioning to indoors. It burns off excess energy, relieves stress and frustration, and provides mental and physical stimulation.

You could also train your cat to go on outdoor walks on a harness and leash. Young cats adapt to harness training quite easily, and with time and patience, many adult cats can learn, too.

Another option is to provide your cat with an outdoor enclosure or “catio.” This is a wonderful compromise, as it allows cats to enjoy the outdoors without being exposed to the risks associated with roaming freely. There are many options on the market, from do-it-yourself projects to easy-to-install pre-designed kits. Many catios are portable, too, so you can take them with you if you move.

Litter Box Training
If you are unsure whether your outdoor cat will use a litter box, be sure to use a large, uncovered litter box with unscented litter and no litter box liner. Soft, natural, fine-grained litter will most resemble what he was using outdoors. You can also try using dirt or sand, and then slowly increase the ratio of cat litter to the dirt or sand.

Preventing Door-Dashing
If your cat is accustomed to being allowed out at a certain time of day or through a particular door, he may lurk in that area and try to rush out at the first opportunity. Here are some tips for redirecting this behavior:
• If your cat follows you to the door when you try to leave, give him his regular meal or a treat on his cat tree or other spot away from the door, or throw a toy away from the door as you leave.
• To keep him busy while you’re gone, leave out toys and other “independent activity” items such as food dispensers and puzzles, cat tunnels, paper bags, and cardboard boxes. Set up a bird feeder outside a window. You can also set up a “treasure hunt” for your cat by hiding food in various places around the house for him to find.
• Instead of greeting your cat at the door or calling to him as soon as you enter, take a few steps inside and greet him there. Ignore him until you reach that special spot. Soon he will learn to wait for you there instead of at the door.

Paula Garber holds a master’s degree in education and is a Certified Animal Training and Enrichment Professional and Certified Feline Training and Behavior Specialist. She is also certified in Low-Stress Handling (Silver, 2015) and Pet CPR & First Aid, and she is pursuing a diploma in Feline Behavior Science and Technology from the Companion Animal Sciences Institute. Garber owns and operates LIFELINE Cat Behavior Solutions and is currently a co-Vice Chair for the Pet Professional Guild’s Cat Committee and a supporting member of the International Association of Animal Behavior Consultants. A consummate cat advocate, Paula proudly serves on the Cat Protection Council of Westchester in her community. She resides in Ossining, New York, with her husband and five rescued cats.