The Best Laid Plans: Adding a New Dog to the Fold 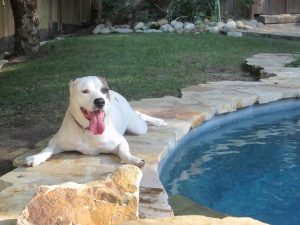 How to introduce a new dog or cat to a home with resident pets has been well-documented by many an expert. Personally, I have done it successfully so many times over the years I rarely bat an eyelid when another creature needs a place to stay. So bringing home dog #5 wasn’t really much cause for concern. I knew our dogs would be okay with her and eventually the cats too, but the dog herself was something of an unknown quantity. No worries I thought, we can handle it.

I should explain that we didn’t really want a fifth dog. It certainly wasn’t advisable given the four skittish rescues we already had. Of course we hadn’t planned it, but who ever does? Still, there she was, looking at me out of her crate at the shelter with her sad sad eyes, imploring me to get her out of there.

This was Maggie, a pit bull/Labrador (we think) cross who had been dumped at least twice at the age of three. As the owner of the shelter so succinctly put it: “She’s a lot of dog.” Yes she was (and still is), all 120 pounds of her and a forceful personality to boot. I had worked with Maggie quite a bit at the shelter. She had responded well to clicker training but I could see how deeply unhappy she was in that environment. Because she had been abandoned, she did not like to be left outside alone and would bark endlessly till someone paid her attention. Usually this came in the form of being shushed then taken back inside to keep noise levels down. All she really wanted was someone to be with her, but no one at the shelter was able to give her any attention as they were so busy with all the other dogs. I could see how depressed she was getting, so slowly – and some might say foolishly – concocted my plot to break her out. 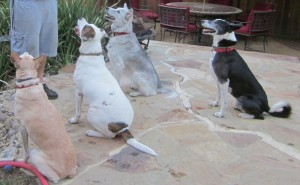 We brought her home one Saturday afternoon. We did the introductions carefully. Neutral territory, one dog at a time, positive associations, click and treat, going for mini walks together and so on. It went spectacularly well. Within the space of that afternoon we had all five dogs together in our back yard, studiously focused on a long-drawn out clicker training session.

Now I look back on it of course, the signs were already there. Maggie was massively stressed and drank copiously the chlorinated water out of the pool we had at that time, rather than the dog bowl. She didn’t pee until she came inside the house and chose our best rug as her spot, something she has never done since.

When we took them all into the house after a few hours, all was well, if a little edgy, as everyone found their place. They all took ate supper and took naps. No problem. At bedtime we took them all out to the backyard for a last bathroom break and something went wrong. Quickly, there was a fight. We couldn’t see what had happened or even which dogs were involved. It broke up quickly but, from that moment on, Maggie and Daisy, herself an abused rescue off the street, were sworn enemies. With hindsight we shouldn’t have taken them out in the dark like that where we couldn’t really see what was going on. Our initial success had lulled us into a false sense of security.

That night time was difficult. We had to break out the dog crate for Maggie to sleep in rather than have her loose. She refused to be left on her own in a room with a dog gate. She simply muscled it out of the way and ran out to be with us. If we shut the door she’d bark the house down, no matter what kind of a fabulous Kong you gave her. If we’d only had the time to build her up to accept – and enjoy – being left alone, but we didn’t.

It was just too much too soon. What Maggie really needed was some time to decompress after the stress of being in the shelter. We should have let her meet the other dogs several times rather than just the once. But we had done this introduction business so many times before without any great problems we had become complacent, especially as it had gone so well that afternoon. 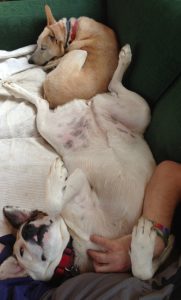 Maggie (bottom) with Bertie (top), her best friend in the world. Her enmity with Daisy is a specific dislike between two individuals © Susan Nilson

Things went from bad to worse between Maggie and Daisy and nerves – both human and canine – quickly became frayed. In fact it was so bad we debated driving her back up to the shelter the following day as it seemed obvious it wasn’t going to work out. But we couldn’t find it in our hearts to abandon her again. Instead we would have to find a way to make it work for everyone.

It required a major change of approach on our side. There were mistakes and more fights initially. We learned very quickly how to avoid this. We decided to keep Maggie and Daisy separate for the time being until things could calm down. It seemed impossible and yet somehow we managed it. We did it so efficiently the fights stopped and everyone calmed down. It took a lot of extra time and effort but it worked.

Maggie however was still stressed. Sometimes I’d have to leave her out in the back yard for short periods of time. The first time I did this she leapt over the 6 ft fence to escape her solitary imprisonment. I found this out the hard way when I saw a massive white shape flying past the kitchen window. What was that, I wondered idly as I did the washing up. Surely it couldn’t be… Yes it was, and by the time I got outside she was halfway down the front driveway. I forced myself to stay calm. If she ran away I might never find her. She was nervous and unpredictable around people she didn’t know. Anything could happen. I couldn’t risk that. So I didn’t chase her. I adopted the jolliest tone I could muster, jumped about and called her name as if the most exciting thing in the world would happen if she came back to me. We hadn’t practiced recall all that much at this stage so I had no idea if this would actually work, especially as she was in emotional overload with countless distractions.

She stood there and looked at me for a few minutes. She was about 20 yards away. I could literally see her brain clicking over, deciding whether it was worth coming back to me or if she should cut her losses and run. Fortunately for me, she knew me well enough and we had built up some sort of reinforcement history during our time together at the shelter, and she elected to come back – for which I praised her enormously. That taught me the valuable lesson that she was not yet ready to be left outside alone for longer than about 10 minutes without getting distressed. We would have to build it up and make sure she had a positive association with being there. Eventually, she would happily stay outside for hours, alone or with our older male dog whom she loved, but would always sleep curled up against the kitchen door so she could be sure of our whereabouts. 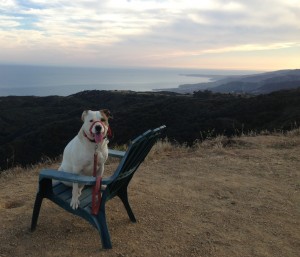 We made sure Maggie had a lot of highlights to her day with fun, mentally stimulating outings. We no longer use the Gentle Leader she is wearing here © Susan Nilson

A lot of dog she may have been, but she really needed my help. She was in emotional turmoil. I immediately upped the number of highlights in her day (treats, training, walks, games, toys, fun outings) to improve her hedonic budget which would elevate her overall mood state. Over six months or so we built up our mutual trust and she calmed down a lot. We did a lot of clicker training to improve her confidence and she started to use her brain to choose behaviors rather than just barrel through with zero impulse control. Often, her behavior had been what some might label as “obnoxious”. For example, she would jump all over you when you were putting on your shoes to leave the house, to the point where she could push you over, barking all the while. She would do literally anything she could to prevent you from leaving. Not obnoxious at all then, in fact. Just scared of being left alone, unsure if or when you would come back.

We decided to give her some time to “decompress” after living in two homes with two different families, being abandoned and then getting stuck in the stressful environment of the shelter for several months. I had underestimated the extent of her emotional trauma, thinking that with a little help she’d “be fine” once in the right environment.

With Daisy and Maggie not getting along we made keeping everyone safe our top priority. If they felt safe then they could relax and so could we. If they were relaxed then they could think rationally and learn new behaviors. So we kept them separate which suited them just fine. We developed a complicated arrangement where we switched all the dogs around throughout the day, separated them when we went out, and walked them at different times. The addition of one dog had created about 10 times the work.

We had our moments for sure. There were times when Maggie pushed my patience to the brink, but because of it, she gave me a deeper insight into canine emotions and forced me to learn how to adapt, dig deep and be more resourceful. A useful tenet I learned many years ago at a training course run by the very talented Ms Sarah Whitehead of the Clever Dog Company in the UK was that, if something isn’t working, don’t just keep doing it but find another way. And that’s what we did with Maggie. Eventually we will start reintroducing her to Daisy but, for now, keeping them separate is best for all of us.

So, if you bring home a rescue dog, or any other dog/cat/fish/ bird/rodent for that matter, bear in mind the emotions they may be experiencing and be ready to understand them, empathize and adapt accordingly. It may not be easy but it will be worth it and you’ll learn a lot about yourself in the process. We initially considered giving up on Maggie but now, two years later, our world would be empty without her in it. My advice? Focus on the bigger picture, know that it’s a long-term project but take it day by day, do whatever it takes to keep everyone safe and stress-free, change it up if it isn’t working, don’t blame yourself if things go wrong (because they will) – and seek professional advice if you need help.