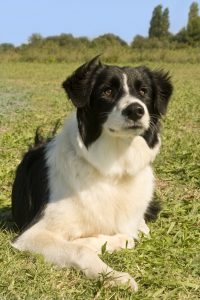 Shep’s owners were too busy for an energetic, intelligent border collie. His deafness was only part of the issue © Can Stock Photo/cynoclub

Within my day to day life as a canine professional, I am regularly asked for advice on cases where standard training approaches seem to be failing. In some of these cases, deafness or visual impairment is also part of the picture.

The case* I will talk about here illustrates a situation where deafness is just a single component in the jigsaw puzzle of any dog’s behavior, rather than the main explanatory variable.

* Note: All names and any identifying details have been altered.

Shep is a farm-bred, black and white, 18-month-old border collie. He was purchased at an auction mart by a busy couple who ran both a home-based business and a medium sized-farm. This was their first dog, and the hope was that Shep would provide some company for the wife and be generally useful with the livestock (cattle and sheep).

The female owner attended basic puppy classes with a local veterinary practice, taught by one of the veterinary technicians (who had no specific pet dog training qualifications) from approximately five months of age through to 14 months of age.

During these sessions the owner often found it difficult to engage with Shep and reported that he seemed to completely ignore her when out on walks. Shep was particularly interested in anything that moved including sheep, cats, cattle but also leaves, grass and so on.

The vet tech had tried getting the owner to use thrown leaves as a reward in one session rather unsuccessfully. Shep was somewhat food motivated, but if the exercise was too difficult he very quickly moved away and entertained himself instead.

At around 16 months of age, Shep was examined by the vet for a regular check-up and the vet noticed that he seemed very unresponsive to normal noises. Some investigations later, and the vet concluded that Shep was very likely to be bilaterally deaf although otherwise very healthy. The owners were referred to me for specialist help and training.

• No recall (the owner had resorted to tying Shep to a friend’s dog via his collar so he could run around but would definitely come back).
• Chasing livestock, leaves, birds (Shep would rush off immediately when he spotted birds on the horizon, and frequently disengaged from training to chase leaves).
• Pulling strongly on the leash.

Initially when preparing for the consultation, I had printed off a range of training guides aimed at deaf dog owners and sent some over by email in advance. From the initial phone chat, it sounded as though we had a fairly typical situation of an adolescent collie with added complications of deafness.

The owner was keen to get help. She mentioned during the phone call that she was worried about being able to cope with a deaf dog. This set off some warning bells for me because she had already been living with this same deaf dog for nearly two years. I wondered about the sudden change.

When going through the usual family routine as part of the consultation to establish how much time they had to spend with Shep, and what he needed to be able to cope with, it became apparent that both owners were exceptionally busy.

There was around an hour a day when Shep could be given undivided attention in total. The rest of the time he was either tied up in the yard (to prevent him wandering off and chasing things) or in the pantry area of the kitchen. The owners worked from around 5:30 a.m. through till 10 p.m. at night, and while they were variously around the house, Shep could not be with them for most of this time. As mentioned earlier, Shep had been intended as a working dog and it was hoped that he would ease some of the demands of farm work.

During our initial assessment and training session, Shep proved to be relatively friendly towards humans and calm around other dogs. A big-boned, steady collie, Shep was a dream to handle from a trainer’s perspective and very quick to respond to hand signals once these were given consistently and within his line of sight. Shep did not startle when touched and was quick to reorient to a gentle shoulder tap or thrown treat.

He was initially reluctant to engage with the female owner, perhaps due to a history of unsuccessful and frustrating training experiences. With a lot of supportive guidance for the owner Shep began to make a conscious effort to work with her and give eye contact – an absolute essential in training and particularly with a deaf dog.

This mirrored much of my previous experience with deaf dogs (and hearing dogs for that matter) both in private practice and in rescue shelters: once the human starts to make a conscious effort to communicate in a clear, consistent manner with predictable and desirable rewards, many dogs will reciprocate.

In this example, previous training attempts had been deeply frustrating for both dog and owner, resulting in damage to their relationship.

We closed the session with a frank discussion about the time and effort required to train a dog, any dog, and with specific reference to Shep being deaf. We worked together to create a training plan, including suggested daily activities and short sessions. We also discussed options for a friend or helper to also take Shep out on walks and do some of the basic attention training.

I raised the possibility of rehoming him through a reputable rescue to ensure lifetime back-up although the owner became quite emotional during the conversation. We agreed that it might be workable to keep him but only if we could improve his quality of life and fit in some short essential training sessions.

We met face-to-face for a further session and I continued to support the owner via email and phone calls over the next month. However it became clear that, due to a chance in circumstances, both owners were now even busier and without reliable household help.

Shep was not getting any worse but neither was he receiving the attention he so desperately needed. Eventually the decision was taken to rehome him and Shep is now enjoying a full and exciting life in a country home.

This particular case illustrates a number of interesting points. Although on the face of it, it was an interesting training challenge on how to help a deaf working lines collie focus more on his owner, the deafness was, in fact, a very small part of the picture.

Shep was a remarkably calm and tolerant dog so, when the previous training had been punitive or frustrating, he simply switched off and entertained himself. This left a legacy of Shep being unwilling to engage with the owner but this was overcome relatively easily.

More crucially, this was a couple with no previous experience of dogs who had bought a working dog as a puppy at an auction. Somehow the vet tech had not picked up on the pup’s deafness in any of the training sessions and, as a result, the dog was labeled as stubborn, easily distracted and so on. The owners were under the impression that Shep would not need any special training to work sheep or cattle, so had been encouraged to focus on teaching him to lie down.

Despite being well-intentioned, the owners were incredibly busy and simply did not have enough time in their lives for a dog of any breed, let alone an active intelligent collie. The deafness had partially contributed to some of the problems but it seems likely the situation would have been broadly similar or even worse with a hearing dog.

Once the decision was finally made to rehome Shep and the owners were able to work through their feelings of guilt and responsibility, there was a clear sense of relief. At a chance encounter last month, the female owner commented how much happier she now felt knowing Shep was in the right kind of home, and that she now realized they were simply too busy to have a dog in their life.

Morag Heirs PhD MSc MA(SocSci)(Hons) PGCAP Human and Canine Remedial Massage Therapist, is a Companion Animal Behavior Counselor who runs Well Connected Canine in York, UK. She works with deaf and blind dogs professionally, provides training and support for the Deaf Dog Network and is the behaviorist for Sheffield Animal Centre (RSPCA) and York & District RSPCA branches in the UK.