The Challenge of Breed Discrimination 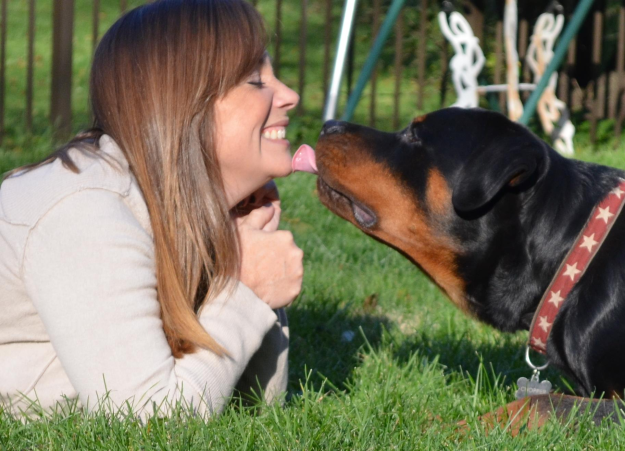 Kym Iffert experienced breed prejudice against her calm, friendly, sociable Rottweiler, Chopper, ever since he was a puppy © Kym Iffert

It was finally a beautiful day in Chicago so I grabbed my bag, my leash, a pocket full of treats and tennis ball and set out for a walk. The neighbors were out and it was the perfect opportunity for a social outing – but not for me and my dog.

As we walked down the sidewalk, others may have looked, some would wave, a few may have offered a smile… and then crossed the street. Social pariah? No, just me and my Rottweiler out for a stroll.

From the time Chopper was a puppy, people have avoided interaction with him and, consequently, me whenever we were out together. When he was just 15 weeks old, another owner in puppy class voiced her fear and refused to play “pass the puppy” with him.

My very own veterinarian tosses treats to him rather than offering them from an open hand.

Having had a fear-aggressive dog in the past, socialization was foremost in my mind when this pup came into my life, but how is a person to socialize a dog properly when no one will come near?

The issue presented me with a number of challenges and, as a trainer, I chose to persevere and ensure that my dog is a well-trained, positive role model for so-called bully breeds in our community.

The puppy class alone was challenging. My dog was much larger than the others, so playtimes with other dogs often felt like an epic fail. Puppy owners would cringe and scoop up their tiny dogs when Chopper would gallop over, offer a play bow or make any type of vocalization.

Wanting people to see him for the sweet, gentle boy that he is, I chose to do most of my training at home or in park settings for work around distractions.

While training in local dog-friendly areas, he was often rushed by older, larger dogs whose owners would let them off leash thinking he was fully-grown and ready to play, only to see their dog react not-so-kindly to a young, exuberant, as yet unaltered male dog. I had to be overly cautious to ensure he would not experience negative interactions with other dogs whose owners were not concerned about their dogs’ bad manners.

As an aside, Chopper has been attacked multiple times by the same two dogs whose owner, perhaps not surprisingly, cannot control the retractable leashes – yet is still afraid to touch my dog after I have literally pried her little Yorkshire terriers off of his neck and hocks.

It did not help matters when we had to alter our home insurance policy to reflect that we house a potentially “vicious” breed of dog. Even the local police department knows “the house with the Rottweiler,” but thankfully only because they often stop and ask questions when they see us out walking.

I decided to persist with my dream of having a well-trained, happy, social dog but reduce the risk of being rushed by others, so I sought out a facility offering group classes that touted positive reinforcement methods and relationship-based training.

Owners were encouraged to bring dogs to the orientation where we were all informed to come the following week with proper equipment: a 4-6 foot leather leash, a bag of treats and a well-fitted prong or choke collar.

I politely waited until the end of class and approached the instructor (with my five-month-old, nearly 60 pound puppy politely sitting at my side) and explained that I was a trainer who did not believe in correction-based training and asked for my money back. No deal. His next comment was, “Lady, if you think you can control that dog as he gets bigger around these other dogs without a prong, more power to ya.”

This became my eight-week challenge. I will not even recount some of the travesties I witnessed in that class – the confusion of corrections followed by treats and dogs cowering from an owner who barked the word “sit” over and over at a shutdown dog.

Chopper was the best-behaved dog in the class and he made it through on a flat buckle collar without a single “collar pop,” yet we were still given a wide berth on our way in and out of the building every week.

I found that trainer’s sentiment to be the norm when people discuss how I should work with my dog. When it comes up in discussions that I have a Rottweiler, people immediately offer advice to keep him on a prong collar to maintain control.

To be honest, I do not see how pinching/poking him would control him any better than the “follow me,” attention and impulse training he learned as a puppy. Unlike many other dogs, he is never really out-of-control to begin with.

I am also blessed with two other dogs. A yellow Labrador and a border collie/golden retriever mix round out the canine dynamic in my family. My Lab is exactly what people expect – a sweet, loving dog. It is hard to keep people away from him when we walk down the street and he relishes the constant interaction.

Dino has been a therapy dog visiting schools, hospitals, libraries, nursing homes and rehab facilities for more than eight years now and has a wide range of adoring fans in our community.

My border collie/golden mix is an insanely smart, highly-strung, somewhat dog-reactive, bundle of anxious energy – yet that never seems to stop people from wanting to approach her, risking their own safety or that of their dog, no matter how large my yellow ribbon or how loud I voice, “Please give her space, she’s not always friendly.”

Yet my happy-go-lucky, attention-loving Rottweiler rarely gets the ear scratch, belly rub or even the polite, friendly greeting he so craves from new people.

I am still constantly told by other Rottweiler buffs that I need a “firm hand to keep him from becoming ‘dominant.’ ” My hackles go up whenever this conversation starts as I try to explain to them that the “firm hand” used on my previously-rescued Rottweiler is probably what caused her extreme fear aggression, and ultimately led to our decision to have her humanely euthanized.

I refuse to use fear, pain or intimidation with my dogs as a training tool which, for our previous Rottie, ultimately netted extreme anxiety, hours and hours of behavior modification training, visits back and forth to the veterinary behaviorist, Prozac, three years of constant management and a life filled with sometimes paralyzing fear in her mind and dread in mine that she would do something irreparable.

She was the dog who inspired me to become the trainer that I am now. Even though I feel as though I failed her in the end, I will not lead others down that path.

My goal is to eventually get Chopper into a therapy program. He certainly has the right disposition. He is comfortable in new settings, does not fear loud noises, thrives among chaos/crowds, loves people and other animals (although I have noticed an aversion to pugs for some reason) and has such a goofball personality that he can be downright entertaining.

All these wonderful traits still cannot seem to counterbalance the fear he instills in people simply by walking into a room or down the street. This has led me to alter some of my training with him.

When someone does want to greet, I ask him to “kiss” a hand (rather than touch) to instill confidence in the person he leans toward, I use a light, lilting voice rather than booming “commands,” I often use the words “please” and “thank you” when working him in public so people see that he responds to softness and kind words without the need to be “controlled.”

I have a much higher expectation of Chopper than I do of my Labrador when it comes to therapy work. I recognize that even though he is a very good dog, people are innately fearful and I have to respect that.

I have come to the realization that not everyone will be comfortable around my dog – and that is okay, I am not comfortable with every person that I meet. Just as I will not force my dog into an interaction, I will not force humans to interact either, but consider it to be their loss if they do not.

Each of my dogs has challenged me, inspired me and affected how I train, but none more than my “bully” breeds. I take my responsibility as the guardian of these dogs very seriously and respect others for their thoughts, opinions and, yes, even their fears.

I will not have the dog who perpetuates the negativity of a breed based on poor training and media inaccuracies. I will have a happy-go-lucky Rottweiler who will be a living, working example for positive training and anti-breed discrimination and hope that together, he and I can inspire change and confidence in those around us.