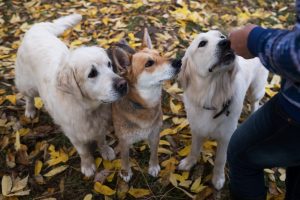 Owning a dog is a privilege, as is the opportunity to share our lives with them for 12, 15 years and, let’s hope, longer still. During that time, think about all those battles and struggles you conquer together, what you achieve that, at first, seemed insurmountable, those amazing journeys you have together and, of course, that inexplicable personal relationship you strike up which no one else can understand. Time spent with a dog is never long enough, but each day is spent creating incredible memories – a unique canine/human time capsule.  Herein lies the rub. Naturally, due to the brevity of time together, a succession of canine friends will enter our lives and create new canine/human time capsules. It is human nature to draw comparisons between then and now, and perhaps also to previous and current dogs.

Throughout a lifetime, while all dogs are immensely special and precious, some owners may for various reasons encounter one or two individuals who just step their paws a little further forward than their other dogs. Maybe they were/are exceptional in a particular discipline and accomplished a great deal, or maybe they simply had a precocious personality.  These dogs may be viewed by their owners as the “best dog ever,” which is fabulous. They were (and still are) great dogs, but what about the current dog? Issues may arise if a current dog is always compared to a standard, let’s say that of the ‘unrivaled dog.’  As such, a current dog’s progress may be viewed as slow or mediocre and an owner may feel frustrated simply because they compare progress rate to that of the previous dog.  But if the owner studied the current dog as an individual and assessed the dog’s merits, taking into account previous circumstances or contexts e.g. high arousal, lack of early socialization, the outlook would not necessarily be so dimmed.  From a trainer or behavior consultant’s point of view, comparisons with an ‘unrivaled’ dog can be frustrating because the current dog doesn’t always receive the praise he deserves. And, unless work is done with the owner to assess what is happening, the current dog may descend into a spiral of perceived failure after failure.

Another common form of comparison is abiding to a regimented set of boundaries, little quirks, treats, rules etc.  that an owner applied to their previous dog even though it may be completely counterproductive for the current dog. Behavior issues can sometimes be attributed to the adage of, ‘it worked for my previous dog.’  But within the space of a canine lifetime, things change, including techniques, opinions, research etc. and thank goodness for that! We now know for instance why it’s not advisable to apply punishment when dogs toilet indoors. We understand that dogs are simply communicating when they display ‘aggressive’ signalling and that we shouldn’t  chastise them for that. We understand that we don’t need to use force and coercive handling/devices etc. Life moves on and we now know there are better and more humane ways of addressing undesirable behavior.

We also have to recognize that some of the ways we handled or treated our previous dogs may not work well for our current dogs, and, again, this can have particular significance in behavior cases. Think, for example, if you enjoyed providing chews for your previous dog, or let him up on your bed, provided free access to everywhere in the home, allowed him free recall, and left him for a portion of the day whilst you were out at work.  This routine may not simply slot into place with your new dog. If you expect it to, then there may be problems.  For example, you may have to progressively acclimatize your dog to being left, especially if you have a puppy or if you have a  dog who isn’t used to being left alone or who has separation issues.  You may not be able to continue, at least in the interim, with your chew feeding routine if your dog displays signs of resource guarding. If there are any issues with reactivity towards you, then positive non-contact training may be advised at first rather than sleeping with you on your bed, all under the guidance of course of a qualified behavior consultant. Adopting a dog is one of the most rewarding experiences you can have but don’t expect all dogs to be alike.  Remember that to achieve the behavior you want, work has to be put in.  The worst case scenario is for a new dog to be relinquished before he even really has been given a chance, especially as rescues are often full and may not have space for dogs to be returned.

When it comes to our dogs, we would be well advised to see the individual in front of us as just that – unique, with his or her own traits, quirks and personality. While we will never forget our previous dogs, we should try to avoid viewing our current dogs as ‘replacements’ but acknowledge that they are individuals in their own right who will create their own memory footprint.