The Dark Side of Dog Training and Pet Care

“Prosecutions under general anti-cruelty statutes are occasionally successful but greatly hampered by the absence of legal standards pertaining specifically to training practices. Provided it’s in the name of training, someone with no formal education or certification can strangle your dog quite literally to death and conceivably get off scot-free.” – Jean Donaldson (2017) 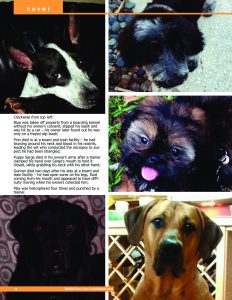 © BARKS from the Guild

Dog training and pet care professionals, and indeed, pet owners themselves, need to be aware that in many countries, states and counties, laws are woefully inadequate to protect the lives of dogs, or protect them from blatant neglect or abuse when they are in the care of trainers, boarding, day care, or any other type of pet care environment. Where such laws do exist, they are often weak, poorly written and/or not well-enforced, leaving gaping loopholes for perpetrators of animal-related crimes. And sadly, all too often in the media, one reads about a dog who died while at the groomer, or at a board and train facility, or many other such horror stories.

In what some see as a pioneering move, then, Hillsborough County, in the Tampa Bay Area of Florida, recently passed an ordinance called Truth in Training, which is aimed at regulating dog trainers. The ordinance came about as multiple dog owners whose pets had suffered at the hands of so-called professionals started to find out about each other’s experiences. Many had, of course, been featured in the media and people started to realize that they – and their pets – were not the only victims. They also became aware of the fact that there was no legislative professional accountability of the dog training industry.

Truth in Training can be summarized in that it:
1. Requires licensing for boarding facilities that also provide training.
2. Creates a database of trainers via free registration.
3. Requires transparency via a written training plan.
4. Requires reporting of death and necropsy.

In addition, under the ordinance, trainers would have to “provide their credentials to the county for publication and have liability insurance of at least $100,000,” according to the Tampa Bay Times (Contorno, 2017). They must also “undergo local and federal background checks.” Trainers convicted of animal cruelty will be “barred from working in the county.” (Contorno, 2017).

During a public hearing and prior to passing the ordinance, which took 10 months, the county commission heard from multiple victims of dog deaths, i.e. people who had lost their pet, including a former National Football League player whose emotional support dog had died, a couple who shared the tragic story of their family pet dying a slow and grueling death, and another woman whose dog had suffered severe injury, but felt lucky that her pet survived. Read more.