The Elephant on the Stairs 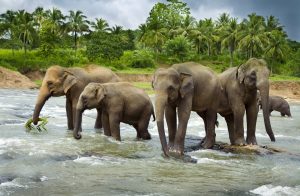 Positive training is not a new idea. With starts and stops over the last century, it has been used by empathetic individuals to bring out the best in their animal companions. A recent book, Elephant Company by Vicki Constantine Croke, reveals a surprising chapter in the evolution of positive training. It is a rousing tale of an Englishman whose love of the jungle giants persuaded him to open an “elephant school” in colonial Burma that saved hundreds of lives in World War Two. It is the story of a man with a near-mystical connection to elephants, one in particular named Bandoola, who undertook a mind-boggling feat of bravery and endurance solely because he trusted his human mentor.

For the dog owner, the experiences of James Howard Williams are an inspiration not only to train their dogs without force, but to learn and respect the ways of their animal friends. Williams arrived in a teak logging camp in the mountainous jungles of Burma just after World War One. He had served in the British Camel Corps in the Middle East and Afghanistan. He had been an animal lover since his childhood in Cornwall, England and the prospects of working with elephants excited him. Williams had signed on with the Bombay-Burmah Trading Corporation as a forest assistant who would be in charge of dozens of Asian elephants and their mahouts. Female elephants were used as pack animals. Male tuskers hauled giant teak logs through forests to rivers, where they were floated to market.

It was an inhospitable place of poisonous vipers, tropical diseases, hookworms and fungus not to mention plants that could rip open flesh. Forest assistants were responsible not only for the operation of the isolated camps but for the health of the elephants as well. With no formal training, Williams relied on the mahouts and his own observations as he daily inspected every rough fold of the elephants from tail to trunk and served as their physician. Williams soon became a devoted protector of elephants as he fell under their spell.

Highly intelligent and sociable creatures, elephants form lifelong bonds with each other and with familiar humans. Simply standing in their presence was a visceral experience for Williams. Their exhalations ruffled his hair but he felt a more mysterious vibration rumbling in his chest as he stood before them. It was a subsonic form of communication between pachyderms and Williams was one of the first to write about it. It was previously thought that elephants used some sort of telepathy to communicate across distances.

Williams also learned of the deep bond between elephant calves and their mothers, and often between females in the camp. They worked eight-hour shifts that ended at noon to beat the heat. Then, the pack was turned loose to forage in the forests until the following morning. They were completely different creatures then, playful, excited and sociable, like school children released on recess. Keen to know his elephants better, Williams often followed them into the bush at night, something his mahouts and friends considered perilous. Elephants have poor eyesight. Startled in the dark, they could have easily crushed Williams. But over time, Williams learned their ways and earned the trust of his elephants.

Camp life was cruel for the pachyderms. Taken in the wild, they were then “broken,” starved, beaten and jabbed with metal-tipped spears in an ordeal called “kheddaring” until they submitted. Williams struggled to change this. A fateful encounter with an especially magnificent male named Bandoola showed him the way. Williams often said the elephants taught him more than he ever taught them. Bandoola, Williams saw, had no scars. He learned that he had been born in captivity and trained by his handler using treats as positive reinforcement. Bandoola was the first of a new generation of elephants, Williams believed. He won over company officials with his new plan.
Calves born to worker mothers were left to fend for themselves and many perished under the corporation’s system. Instead, Williams kept mothers and calves together. At age five, the calves were sent to Williams’ “elephant school” where they learned their jobs with positive reinforcement. At the end of their working day when their mothers were freed to forage in the jungle, the calves were sent to them “stuffed full of sweet bananas.” Elephants under Williams’ system impressed company officials because they were healthier, happier and more productive. With the new school, Williams began to train young mahouts to use positive reinforcement in handling their giant partners. He also opened an elephant “hospital” to provide long-term, specialized care for the pachyderms who previously had been left to die.

In World War Two, the Japanese Imperial Army invaded Burma, seized the teak camps and put Williams’ elephants in serious danger. Williams was called on to lead an exodus of thousands of workers and their families — including his own wife and son — out of Burma, a perilous trek over mountains and rivers in which hundreds died of starvation, exhaustion and cholera. He then joined the British Army to resist the Japanese, who had put out a call for all mahouts and their elephants to report for duty or face death.

Williams was sent to advise the elephant corps of the Royal Indian Engineers, where he waged a guerrilla war against the Japanese, using elephants to destroy bridges and transport supplies where mechanized vehicles could not travel. Closer to Williams’ heart, he trolled the jungles at high personal risk to find mahouts and persuade them to bring their giant companions out from under the Japanese. The Japanese placed a price on his head.

In the closing days of the war came Williams’ most remarkable feat. He was tasked with leading the elephants and their handlers out of Burma and harm’s way when the Allies retook Burma. It was a nearly impossible undertaking. Usual jungle routes were criss-crossed by Japanese patrols known to kill everyone they encountered. Somehow they made it most of the way across the mountain ranges of Burma. Then, the exhausted column, traveling in a remote, unmapped region, ran smack into a rugged escarpment hundreds of feet tall and stretching without end in both directions. From the sound of explosions, Williams knew Japanese units were just miles behind them.

In desperation, Williams tried something never before done with elephants. He and his workers carved a series of crude “steps” up the face of the soft, limestone cliffs. Then he had to convince the elephants to use them. The way up was barely wide enough for an elephant. It would have to be taken one precarious step at a time. Undertaking it would require not only balance and stamina but supreme confidence. Williams turned to his old friend, Bandoola. If Bandoola would try it, the others would take confidence and follow. Williams showed the elephant what was expected. Then he left him with his handler and climbed alone to the top. He did not want Bandoola to sense his own high anxiety. Williams waited. And waited. Hours later, incredibly, a giant head began to appear at the rim of the cliffs. Bandoola made it. So did every elephant following him. Such was their trust in the human now widely known to the public as “Elephant Bill.”

The war ended and with it, British control over Burma (which is known today as Myanmar). A way of life was over. Williams and his family left for England, never to see his elephants again. He left behind an example of what can be accomplished with respect, positive rewards and dedication to our animal friends.

About the Author
Bob McMillan is a newspaper editor and columnist who lives in the foothills of Middle Tennessee with his Irish wolfhound, his new puppy, several rescues and a remarkably tolerant cat.