The Five Freedoms and Shirley

I had planned to write about a different topic today, but life often gets in the way of our plans — such as having to euthanize one of my pets yesterday. She was just shy of 15 years and that is very old, for sheep. Her name was Shirley and she has a story to tell. 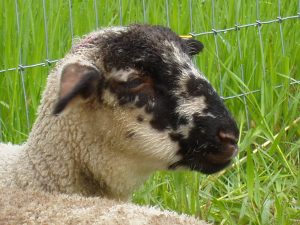 My wife and I first met Shirley in the spring of 2006 at a lambing event on a nearby farm. There must have been 100 sheep with scores of their babies, all available for petting and purchase. It was a working farm and the breeds were meant for human consumption.

Shirley’s birthright was to become food for humans, but that was not her fate. Neither was it the fate of Bluebell or Pearl. We picked them to become our pets and assumed the role of their guardians and stewards for the next one and one-half decades.

I vividly remember the next time I saw them, as I had finished working my midnight shift and was driving home along a country highway. It was May 13, 2006…the day the farmer was going to deliver our lambs to their new home.

The highway passed by the sheep farm and a pick-up truck pulled just ahead of me, with three lambs in the cargo bed. I followed them to my homestead and the barn which would be their home. They had grown from 15 pounds at the lambing event and ranged from 60-80 pounds upon arrival. The girls, as we called them, were unloaded and began exploring the stalls where they would sleep and the fenced paddock where they would graze. 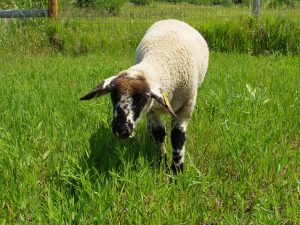 My wife and I were city folk who had moved to the countryside. We had no experience keeping farm animals but had had a wide range of pets over the years. Our approach to keeping sheep was based on a philosophy which I later learned was named The Five Freedoms, established by the Farm Animal Welfare Council in Great Britain.

1. Freedom from hunger and thirst, by ready access to fresh water and diet to maintain health and vigor.
2. Freedom from discomfort, by providing an appropriate environment including shelter and a comfortable resting area.
3. Freedom from pain, injury or disease, by prevention or rapid diagnosis and treatment.
4. Freedom to express normal behavior, by providing sufficient space and proper facilities and company of the animal’s own kind.
5. Freedom from fear and distress, by ensuring conditions and treatment which avoid mental suffering.

They enjoyed their first year of life in a one-acre grassy paddock, which we later expanded to two acres. A large lean-to was built to shelter them from the elements and I planted trees for shade. Mother Nature offered a mature apple tree, which the girls appreciated in the fall. First thing each morning Bluebell trotted to the tree and waited for me to arrive and pick some apples. Shirley and Pearl soon caught on and never missed a snack. 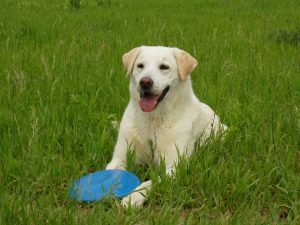 Charlie, our gentle yellow lab, was a perfect companion for them. His coloration was more white than yellow, so he looked like a member of the herd, unless you looked more closely!

An additional grassy paddock was added providing another half-acre and I built a portable lean-to for that space. One of my favorite memories is of a warm day when a gentle rain fell, and we all took shelter under the roof of the lean-to. The girls laid in a row to my left, I sat in the middle and Charlie snuggled on my right.

I could have died then and there, happy and content. 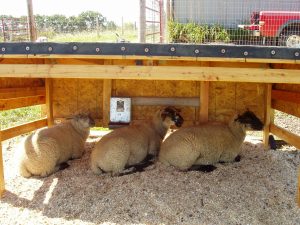 Save room for Charlie and me!

On May 22, 2007, we added Fancy to our farm animal family. She was a beautiful 12-year old American Paint horse with a sweet disposition. Like Charlie, she proved to be a great companion for our sheep. When I checked on them in the evening, I often found all four sleeping in the same stall.

From the very beginning we honored the Five Freedoms and gave them all a stress-free life with nutritious food and regular veterinary care. My daily mission was to feed the girls in the morning, let them out to their paddock and clean the barn. At supper time I brought them into the barn, fed them and cleaned the paddock.

It never mattered how hot or cold it was, whether I was healthy or sick. I brought them into my life and had an obligation to their welfare.  Besides, the hours I spent doing animal chores gave me time to think.

One of the first lessons I learned was how to get them to stop grazing and return to the barn. I could approach Fancy, put a halter on her and walk her to the barn, but how could I round up the sheep?

Ivan Pavlov answered that question for me. I installed a bell at the paddock gate and bought some cracked corn. When the girls were grazing nearby, I rang the bell, put corn in a feeding bowl and set it down on the near side of the gate. Then I opened the gate and stepped aside.

Shirley was the first to come trotting through the gate to eat the corn, soon followed by Bluebell and Pearl. In just five trials they were reliably responding to the bell no matter how far away they were, or if they were out of sight in their lean-to. Fancy soon caught on and would come running from 500 feet away.

That little bit of training paid dividends over the years when heavy thunderstorms rolled in and I needed to get the girls to the safety of the barn.

Shirley, as smart as she was, took it a step further. I stored corn in the tack room and when I opened the door, it creaked. Before I knew it, every time I entered the tack room and turned around, Shirley was standing at the doorway waiting for her corn. Like the bell, the creaking sound had become a cue.

Life was good and a predictable morning routine developed. I gave the girls apples for a treat and Pearl wagged her tail happily when I pulled an apple from my pocket. All three licked their lips in anticipation of the sweet treat. Afterward Shirley walked to a fence post in the barnyard and rubbed her side and neck against it. Bluebell went straight to a section of fence where she rubbed her but, licking her lips the whole time. Pearl was happiest when I rubbed her velvet face and ears, and then scratched her backside.

Things were not always peaceful, though.  Over the years Shirley and Bluebell engaged in head-butting fights, like medieval knights on a jousting field.  I never knew why they were fighting but the conflict never lasted long and they returned to grazing side-by-side.

The years flew by and as the girls aged and began showing signs of arthritis, and I sometimes anticipated the end of days. By 2018 both of my Labradors were seniors, as were my sheep and horse. It seemed likely that they would be reaching the end of their lifespans in close succession. 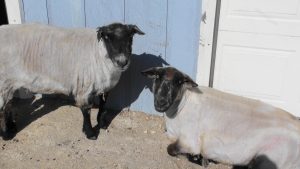 Pearl was the first to falter and struggled to walk up the slight grade from the paddock to the barn. At times it was nearly impossible for her to get up after lying down. Pearl began taking Meloxicam and as her pain subsided her mobility improved. Two years later she remained spry and happy, despite her condition.

It surprised me when Shirley slipped and fell on the snow-covered ground one day, and then again. One afternoon in January I went to check on the girls and found Shirley had fallen onto her side and could not get up. Pearl and Bluebell meanwhile had no trouble navigating the slight incline or the paddocks.  I wondered why Shirley was having such trouble.

The problem grew worse in the last few weeks and then Shirley fell four times in one day. I made an emergency weekend call to the veterinarian two Saturdays ago and learned that Shirley had a significant heart murmur, and her arthritis had weakened her rear legs.

We put her on a heavy dosage of Meloxicam and a generous diet of grain and alfalfa. Shirley grew stronger and regained her steady mobility in a few days.

She spoke extensively about animal welfare, citing the Five Freedoms as the foundation upon which animal welfare decisions should be made. Her next presentation was on making tough decisions about humane euthanasia.

As I listened my thoughts returned to Shirley and tears welled in my eyes. I wondered if she would be the first of my pets to leave me. She was growing stronger but there were several weeks of hard winter weather ahead and I was not sure whether there was time enough to make it to spring, when life would be easier for senior animals.

February 10 arrived and I suddenly found it harder to get Shirley to take her medicine. This persisted and by Tuesday evening I felt growing unease. So long as she took her medicine, we had a fighting chance to keep her on her feet, engaging in normal social activities.  But it was getting tougher.

Wednesday morning confirmed my dread as she appeared listless, standing with her head down, staring into the distance. She refused several offers of grain, alfalfa and hay throughout the day. Shirley would not even eat the apple I held for her. There was nothing left of the feisty spirit and clever antics which I had witnessed for 15 years.

By late afternoon my wife and I agreed it was time to fulfill our obligation to Shirley’s welfare. She was no longer free from hunger and thirst, or discomfort. She was not free from pain or disease and could not express normal behavior. I had to conclude that she was distressed.

So were my wife and I.

We called the vet clinic and went to visit Shirley and the girls. The veterinarian and two technicians arrived at 3 p.m. and we spent the last 30 minutes of Shirley’s life comforting her. Shirley passed quickly and peacefully from our lives and we stroked and petted her.

I awoke this morning and as I looked out the kitchen window, I saw a fresh blanket of snow, glistening in the sunshine. Beneath the window a pretty junco scratched the snow aside, pecking at the food I had put their yesterday. Appropriately, juncos are also called snowbirds.

He was the first bird to arrive at the feeder today. I thought, “The poor little guy is hungry, trying just to live another day.” But a second bird arrived, and he was hungry too.

The Cooper’s hawk swooped down and grabbed the junco in his talons, then flew a few feet away and pushed his prey deep into the snow. The hawk constantly turned his head, looking about cautiously for a minute or more. Perhaps he was aware of his own vulnerability while on the ground. Then he took flight, carrying his victim away.

It was a stark illustration that animals in the wild cannot enjoy the Five Freedoms. They express normal behaviors like searching for food, at their peril.  They have no stewards or guardians. There is no one to care for their welfare and each day is a struggle to survive.

As pet owners we take animals into our care. They are in fact captive. As such we have a solemn duty to provide for them as best we can, from their first day to their last. 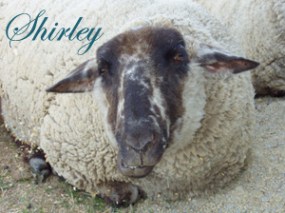 Goodbye Shirley, we did our best for you until there was nothing more to do, but grieve for your loss.