The Importance of Mental as well as Physical Stimulation 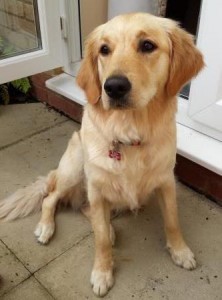 People, no matter how much they love their dog, sometimes don’t consider how desperately bored and unfulfilled some dogs get if they have little exercise or outlet for his/her breed instincts.

People in particular who have not lived with dogs before simply may not realise. It’s not that they are being deliberately neglectful – it’s a lack of knowledge.

It is no wonder when the outside world is an occasional ‘treat’ rather than a regular daily event, that a dog may become overwhelmed with either excitement or fear – or both.

Here is the story of a young dog I visited a couple of weeks ago:

The gentleman had had an emergency heart operation some weeks previously and will still take some time to fully recover. He was the resident dog walker as the lady of the house, who had arthritis, is not strong enough to manage Pip alone.

Pip is a ‘she’ – a very energetic eleven-month-old Golden Retriever who, temperamentally, is coping with the lack of stimulation and exercise remarkably well. The owners are doing their best with fetch games in their small garden and throwing a ball up and down the stairs, but that is all they can manage.

Young and enthusiastic, the outside world is just too stimulating for Pip and is getting more so by the day. She is desperate to introduce herself to every person she sees and most especially every dog.

When I went to visit them, Pip walked around the house beautifully with me with no leash, and then walked perfectly from room to room on a long loose leash, but as soon as we got outside the front door she was on sensory overload. Even immediately outside their front door was a huge adrenalin rush for her. The only way anybody could walk her anywhere in that state of mind would be by using physical restraint and that is exactly what I work to avoid.

So I came back in the house.

Because day by day Pip has increasingly insufficient opportunity to interact with other dogs, dogs are understandably super-exciting to her and maybe just a little daunting as well. Even traffic is a buzz.

So here is something the lady can do. She can keep going in and out of the front door as well as standing around out there and do it so frequently that Pip starts to become more accustomed to it and the world outside the front door loses some of its novelty value.

The more little outings she has the more mundane they will become.

I suggested a dog walker for now, until the gentleman regains his strength. This way Pip can also get to be walked with other dogs so that she remains socialized.

There are more things they can do at home to stimulate and fulfill her. Scenting, searching and foraging is great for healthy stimulation and giving the dog’s nose the work it is designed to do. They can work on her recall too. They can walk her around the house and garden to practise their new loose-lead walking technique. Instead of reacting when she jumps up at them, as well as turning away they can actively mark and reward her when her feet are on the ground. They can mark other times when she’s calm or lies down.

Looking for and rewarding what we do want rather than simply reacting to the behavior we don’t want not only makes the dog happy, it makes us happy too.

Understandably Pip is a little nervous of new things. The less she is out in the real world the more sensitive she becomes.

I wanted to try a soft but secure harness on her, one that the leash can hook to both chest and back (the Perfect Fit Harness available here in the UK is my favourite from www.dog-games-shop.co.uk). I left it on the floor for her to investigate. She was a little wary of it. I worked on introducing it to her very slowly: chicken for sniffing it, chicken for hearing it simply click to together; soon she was putting her own head through the hole to get the food and I carried on desensitizing her. I didn’t push it. They will carry on taking it very slowly and she should be welcoming the harness after a couple more sessions.

Thus she will associate the harness with good stuff.

Remember a song that brings back wonderful memories? ‘Your song’ (mine was ‘Bridge Over Troubled Water’ – a very long time ago!)? That song is associated with special times and your brain is now hard-wired so whenever you hear it you re-live a little how you felt back then. This is the sort of positive association we want to give our dogs when we are desensitizing them to something.

It’s now just over two weeks later and things are looking up for Pip. Her owners have employed a dog walker three days a week.

I received an email today: “We took Pip out down the road yesterday on her harness and we were both impressed with how well she walked. It was a pretty stress free little stroll and we even met children on scooters which didn’t really faze her. Even when we met another dog she was fairly sensible!

The hunt the treat game in the garden is probably her favourite game to date and she is getting rather good at it, she waits excitedly inside the kitchen while one of us lays the bait. Then its nose down and away then she wont stop till she’s found it all”. 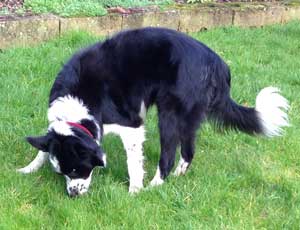 This hunting game is ‘Sprinkles’, devised and trademarked by Sally Hopkins. Take a look here.  Sprinkles is a very simple concept and has powerful results. Benefits listed include mental exercise, reducing stress, encouraging deep sleep, building confidence – and it’s simple to do.

I write up the ‘story’ of each dog I go to on my website: www.dogidog.co.uk