The Importance of Socialization for the Young Animal 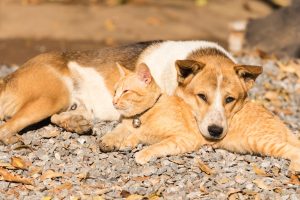 Socialization is a crucial part of an animal’s development. Graphic © Can Stock Photo

Humans take years to learn socialization skills. In the process of growing from infant to adulthood, the human takes more than 20 years for his or her brain to fully develop. Yet during this time there is much socialization that is taking place. How different it is for animals that have far shorter lifespans than their human counterparts.

Typically smaller dogs have a greater life expectancy with some breeds living more than 15 years –and some living into their 20s. Larger dogs, however, have a shorter life expectancy. Great Danes are one such breed, generally living 8 years or less. Cats, by contrast, can live up to 20 years and more, though this is only true for the indoor cat. Most outdoor cats have a much shorter lifespan of approximately 1-5 years. Because these animals have much shorter lifespans than do humans, they grow up quicker. Therefore, they do not take as long to learn their socialization skills.

For puppies, there is a critical period in which socialization development takes place. This occurs during the first three to 12 weeks of life. While the pup continues to learn social skills beyond this time period, the greatest influences are made during this period of time. In fact, the experiences that the puppy has during the first 12 weeks of life will help to mold both his personality and his reactions (Martin, 2013).

The cat’s critical period of socialization takes place between two and seven weeks of life. This is a time owners must be particularly aware of, since the kittens must be handled during this time if they are going to maintain a social relationship with humans.
With inadequate socialization, young animals can become difficult to live with as they age. If an animal has negative experiences during the sensitive socialization period, behavioral problems can arise that may include fear and aggression issues (Martin, 2013) – and some have even pointed to psychological damage that is irreversible.

During their youth, pups and kittens alike learn how much is too much. In playing with one another they learn bite inhibition. Bite inhibition is achieved when an animal learns at what point the pressure from his bite causes pain or discomfort to the playmate. This is particularly important for animals to learn at an early age, lest they have a biting related incident. One of my dogs came to me at the ripe old age of a year and a half – a rescue that had never lived with humans. When she learned to play with us, her bites were far too hard and painful for the family. In teaching her bite inhibition it was necessary to yelp like a pup would so that she would understand when to stop applying pressure with her teeth.
Young cats can often express play aggression toward their owners. They may attach, fight, swat, bite, or perform less painful but equally inappropriate behaviors such as stalking, chasing, pouncing, and leaping side to side (Landsberg, Hunthausen, and Ackerman, 2003). Just as in puppies, these kittens that bite too hard do so because they never learned bite inhibition.

Play behaviors for the kitten are displayed with the purpose of development of predatory skills. Thus, it is this behavior in the kitten that leads to the prey behavior of the cat. While this enables the cat to become a good hunter, it is not appropriate in the home. Correction of inappropriate behaviors at an early age will help to curb this. However, if a young cat is already expressing bad habits of play, a behavior professional can work with owners to ensure that these behaviors are corrected and replaced with more appropriate behaviors.

Quick tips:
• Take precautions with children, the elderly, and those suffering immune deficiencies. Lock your pet in another area during their visits.
• Teach children how to play with pets appropriately.
• Withdrawal from play if the animal begins to show signs of play aggression.
• Withdrawal from play if the animal bites too hard.
• If your animal does not respond to a verbal “no” during play, try a yelp sound.
• Do not use hands and arms in play with cats. Always employ the use of toys for them to chase and capture.
• Expose kittens to handling by humans at an early age.
• Take pups to a variety of places and allow him to experience interacting with a variety of people and animals.

The good news is that while these behaviors are normal, they are also avoidable with “routine socialization, appropriate exercise, and [the avoidance of] inappropriate play” (Landsberg, et al., 2003). In the event that the behaviors have already developed, both cats and dogs are able to learn more appropriate behaviors through behavior modification techniques.