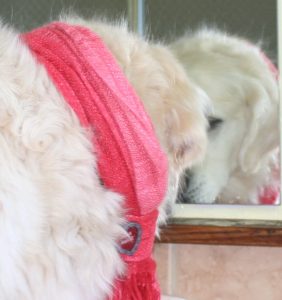 A well-known test devised in 1970 by psychologist Gordon Gallup Jr. is used to determine whether an animal recognizes himself in a mirror. This “mirror test” is widely regarded as the “gold standard” for determining whether an animal is self-aware, that is, recognizes himself as a distinct individual and has a concept of self. This test may very well do that — sometimes, for some animals. Chimpanzees and some other primates pass easily; elephants and dolphins also pass. Most dogs do not, and, for many scientists, this is held up as “proof” that dogs have no concept of self or ability to recognize themselves as individuals.

It is absurd for at least two reasons.

First of all, many dogs do absolutely recognize themselves in mirrors, as I wrote about a few years ago. They also recognize familiar humans and other dogs. Some dogs are quite adept at making eye contact and reading body language via mirror reflections, and they use the mirror to communicate effectively with one another or with their humans. So, some individual dogs do pass the mirror test.

In fact, an observant puppy owner can often pinpoint the moment when this recognition dawns. When Jana, my 11-year-old golden, was a puppy, her Aunt Daisy and Uncle Buddy, mature adult dogs, refused to play with her. She was larger than they were and full of that annoying puppy energy. Her big brother, Timo, was just plain mean to her. In need of playmates, Jana wandered into the bedroom at my mom’s house one day. Imagine her joy to discover another puppy! Jana earnestly play-bowed to this puppy, who always bowed back. But their play never progressed beyond enthusiastic bowing.

This happened a couple of times, then Jana lost interest. She would glance at the reflection and move on, apparently having figured out that that was not another puppy. Not long after, she first made eye contact with me via a mirror and began to show signs of recognizing that the mirror puppy was an image of herself. She was about 6 months old.

But the real reason that that claim of dogs lacking self-awareness, based on the mirror test, is that dogs are not primarily visual animals. Their sense of smell is far more significant to their experience of the world around them. Though we still have a poor understanding of how dogs’ sense of smell works, some research does exist. Wise ethologist Marc Bekoff figured out long ago that self-awareness in dogs is more likely tied to smell than appearance, and he devised his famous yellow snow test to establish whether dogs recognized their own scent and responded differently to it than to other dogs’ scents. They do.

It should be obvious that dogs recognize individuals of many species by scent; how else would dogs be able to track and find missing persons? But this sort of “anecdotal evidence” of canine skills is routinely dismissed by scientists. So, some researchers are dotting all their i’s and crossing all their t’s on the way to proving what we dog professionals have known for years.

One of my favorite such researchers has taken the study of canine scent discrimination to a new level. Dr. Gregory Berns, author of How Dogs Love Us, recently published his study of dogs’ ability to distinguish individuals by scent, based on MRI scans. This study hypothesized that, if dogs recognize individual humans and dogs by scent, and have positive associations — a strong bond — with those individuals, the scent would trigger a reaction in the brain’s pleasure center. He found that all scents — familiar and unfamiliar — produced similar responses in scent-detection areas of the dogs’ brains. But only the familiar human’s scent produced a strong pleasure response. A similar pleasure response was recorded in response to hand signals that signified that the dogs were about to receive a reward.

While we are all aware, on some level, of dogs’ superior scenting abilities, we (dog owners and trainers alike) still tend to base much of our training and interaction with dogs on visual and auditory cues. It would be wonderful to find ways to use familiar scents as motivators or rewards, or figure out how to use scent-based cues in training. If any PPG members are doing this or have ideas for incorporating scent into training (other than nose work), perhaps we can get a discussion going.