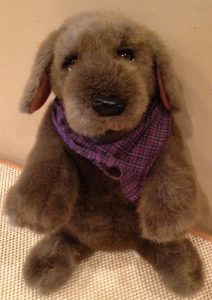 I have the perfect dog. He doesn’t bark, “potty” in the house, chew on furniture, or do ANY undesirable dog behaviors. Perhaps you have one too; mine is called Fido, and he’s a big stuffed dog!

Real dogs bark, dig in the yard, eliminate in the house, whine, chew on furniture and other delectable human artifacts. And they do this unless the dog-guardian knows how to prevent the behavior from occurring while showing the dog what behaviors they’d like him to do. Unfortunately for a lot of our dogs, their guardian didn’t realize having a dog required time, patients and often times, guidance from a knowledgable professional.

That squishy dependent puppy doesn’t remain that way for long, and without investing time in “baby proofing” the environment, teaching the pup appropriate behaviors, and making sure there’s plenty of mental and physical stimulation, Pup suddenly becomes more independent, often times unruly so the frustrated human gives up! It’s not a coincidence that there are a large amount of adolescent dogs living in shelters today. Some are euthanized in over crowded facilities, while others deteriorate because their emotional and physical energy are not given appropriate outlets. For the lucky dogs who find homes, it is often with the guardian who thinks they’re skipping the puppy phase, only to realize that they were not prepared for the work involved in raising a dog! And so the cycle continues.

In a recent professional chat group, someone asked whether it seems that today’s dog has more behavior problems or does today’s dog-guardian have higher expectations of their dog? In my opinion the average dog does have more issues partly because the dog-guardian does not know how to resolve the problem, but also because the human has little tolerance for the dog being a dog!

Take for instance the barking dog. The guardian is irked by the noise, is often the target of ridicule from a neighbor complaining about the dog, and moreover, is extremely frustrated because punishing the dog by yelling, hitting, and or the use of anti-bark collars isn’t often effective, what’s more, it can be cruel and produce other behavioral side effects. The bottom line is these techniques do not resolve the emotional component of why the dog is barking in the first place! Barking is after all, a communication and dogs bark for a variety of reasons such as to alert us to noise or perceived danger, alert the “predator” that they are being watched; they bark when frightened, when they need something or sadly when they’re bored.

Another behavior that gets dogs a one-way ticket to the shelter is going “potty” in the house. No, it should not be tolerated, but keeping the dog on a schedule that accommodates the dog’s needs as well as making sure that he’s managed indoors and reinforced with high-value treats after he relieves himself outdoors is key to training this behavior. Many guardians, following (faulty) information, put their dogs in a small crate; the thinking is that if the crate is just big enough for the dog to stand up, lie down and turn around, that he won’t have the opportunity to “mess”. But the truth is that he will relieve himself, if his guardian doesn’t keep to a schedule that meets his needs, so now you have a dog or puppy that is forced to sleep in his mess and the guardian has unwittingly taught the dog to eliminate in his sleeping area!

Dogs chewing on coveted human artifacts has gotten many dogs into trouble and in some cases the victim of abuse when the guardian thinks that the dog was being spiteful, as evidenced by the dog’s “guilty” expression when caught. Just like a toddler, dogs need constant management. A competent guardian would no more leave a toddler unsupervised, but often they leave the dog to explore the house on his own. A little forethought of containing the dog, limiting his access to rooms that are forbidden and keeping valuables out of his reach will do wonders for maintaing the human-hound bond.

I remember growing up with the family dog. Looking back, it seemed that dog owners were more tolerant or at least their expectations were that the dog would act like a dog and not a human. When I was around 6 years old, I tried to take a bone away from our dog and she bit me. My mom did not reprimand the dog or take her to the shelter, she instead “explained” as only my mom could do, “Stay the @#$% away from the dog when she’s eating!”

I have a lot of empathy for the busy person who is over loaded with work and responsibilities, however, I think it would be prudent for these individuals or families to write out the reasons for wanting a dog, talk to experts as to what it will take to provide for the dog, and perhaps go as far as becoming a foster-dog guardian just to see if pet-parenting makes sense, and if it doesn’t, I highly recommend getting a stuffed dog because they are perfect!