The Power of the Clicker 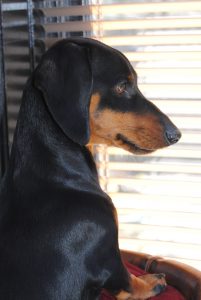 Dickens’ family purchased him from a breeder when he was five months old. The breeder did not allow the family to see the entire litter nor the dam and sire before they took him, but brought him up a flight of stairs and simply told the family, “I pick this pup for you.” The family was slightly upset by the interaction and the inability to view the entire litter or meet the dam and sire, but Dickens ran right over to them and snuggled and won them over immediately. He seemed happy and playful, so they took him home.

Over the next several days, the family had visitors to the home to see their new pup. To their dismay, Dickens would charge toward their visitors, back up and bark hysterically without stopping. Dickens was not the cute, sweet and friendly puppy they thought he had been when they saw him at the breeder’s house. So they called the breeder to ask if Dickens had ever met other people, to which she replied that she had been sick, so the pups had really not met anyone other than herself for five months. The most tender and most important socialization period for any pup of any breed is the first 16 weeks of its life, and this puppy only knew his litter-mates and the one female breeder.

This family had had a miniature dachshund for 14 years but who had passed away in 2011. Apparently this dachshund had been aggressive towards other people and other dogs for its entire life. They had tried training but disagreed with the techniques recommended. The trainers they hired had all used corrective methods, which only made the dog worse. They stopped all training and put the dog in a separate area when company came over. The family were adamant that they did not want to endure another 14 years of a dog who could not be part of their family when guests were in the home, because they liked to invite people over as well as socialize regularly outside and take their dog with them. They were heartbroken and unsure as to how to proceed with Dickens.

When the family contacted me for assistance, I told them there were no guarantees but that the pup was young and, if they were committed, the prognosis was probably good. I assured them that all training would be positive, force-free and fun. The family was initially skeptical but set up an appointment with me.

Lesson #1
When I arrived at the home, the family had put Dickens in the bathroom with the door closed so I could enter safely. After talking for a few minutes, Dickens was released from the bathroom and came rushing out, barking hysterically. He would charge forward, back up, move forward toward me and then back up. He repeated the behavior but never came close enough to bite me and did not look at me. He was not actually looking at anything. It was like frantic hysteria. I watched this for about a minute, then I tossed several treats toward him and away from me which he immediately scurried around to collect. I thought, “The dog takes food, so he can be easily trained to give alternative behaviors to barking and hysteria.” And I was right! This was a smart little pup.

I charged the clicker and began rewarding quiet behavior. I tossed him a few freebie treats, always tossing them away from me, clicking and tossing him a few freebies, tossing them all over the kitchen to keep him scurrying around and quiet. I explained to the family that practice makes perfect and that at that moment Dickens was practicing being quiet while having a great time. He was also having a great time with a guest. After three or four tosses, I waited before tossing again. I wanted three seconds of quiet behavior, so I counted to three, then clicked and tossed treats. After several times of that, I counted to six and clicked and tossed treats. Dickens was having so much fun and learning that just being quiet feels better than hysterical barking. In that one lesson we had 30 minutes of working with Dickens and no barking. I moved about the home while the family counted seconds of quiet and clicked and treated.

We also worked on initial ‘name game’ training and a good recall. The family did an excellent job of saying Dickens’ name and clicking and treating when he looked at the person who called him. This was also quite fun for Dickens. Recall training was very successful. Dickens ran from room to room in the home to the person who called him. Each time, running right past me while giving cursory looks but not being stressed.

The first homework lesson was click for quiet behavior, which meant being proactive and counting the seconds between clicks and not waiting too long, as well as the name game and recall. I hoped that when I returned for the second lesson, Dickens would have an immediate response to his owner when he heard his name called and a fantastic recall.

Lesson #2
I entered the home and Dickens barked for only a second. The family recalled Dickens and tossed a handful of treats across the room from where I stood, which Dickens scurried all over to find and collect. His recall was immediate and successful and I was so thrilled! He noticed me and did not bark and he also seemed happy. The family reported that name game and recall were going very well but that Dickens was also doing some demand barking during the recall games.

I suggested that they pre-stuff several puppy Kongs, and when Dickens recalled, reward him with the stuffed puppy Kong to keep him busy and help him relax in between recalls. With this exercise, Dickens would practice being relaxed and quiet, rather than being demanding in between recalls. This technique could also be used for visitors by giving him a stuffed Kong on his bed to focus on when they arrived. Practice makes perfect and practicing relaxing and being quiet with a Kong is good training.

As we were talking about their week of training and about Dickens’ behavior in general, they said, “Wow, Donna! We didn’t really think that something so simple would work. We are so impressed.” They were able to have visitors over a couple of times during the week and Dickens would lay on his bed with a Kong, or would hang out quietly and wait for the next treat.

The family deserves a lot of acknowledgement here because they worked so well together as a team. If one family member was talking to guests, another family member was counting to 30 to click and treat Dickens’ quiet behavior before any barking ensued. It was a choreographed team effort between family members that led to wonderful success. I was actually able to work on ‘sit’ and ‘down’ with Dickens during this lesson. He was not ready for me to pet him yet but he was a hard working dog. I could lure him and this little guy certainly learned fast.

Dickens learned ‘sit’ and ‘down’ on hand and voice cues in approximately five minutes. In between working on ‘sit’ and ‘down’, the family and I were talking and I noticed Dickens did a spin with a hop while looking at me and that he was quiet. I was very quick to click and treat Dickens, and he did it again almost immediately. I could not stop laughing at Dickens’ cuteness. All family members worked on ‘sit’ and ‘down’ and clicked and treated Dickens for the ‘spin and hop.’ Dickens appeared to enjoy the laughter as much as he enjoyed the treats.

Lesson #3
When I arrived, Dickens alerted the family with a bark for about two seconds and then went right over to his bed upon being recalled and was given a stuffed Kong. He lay calmly on his bed while we talked and moved around the home. The family reported they had many people in their home over the Thanksgiving holiday and that Dickens had been amazing. He had not barked at visitors, had done his spin and hop for people, had sat and laid down, and relaxed on his bed.

The family reported that they could not have asked for a better dog on Thanksgiving and their visitors complimented them on how wonderfully behaved Dickens was. As they told me their Thanksgiving story, they were all beaming with pride. During this lesson we worked on hand targeting, which taught Dickens to touch my hand. Dickens loved this game and he let me pet him by the end of the lesson.

After three lessons, Dickens was no longer barking uncontrollably, was no longer charging towards guests then retreating and his obedience was becoming more reliable all the time. The family has no intention of giving up Dickens because he is fun and sweet, and has learned to enjoy visitors.

This family worked nicely together as a team and never once asked, “How many treats?” They used the dog’s food for training and eliminated the use of a food bowl. They were very generous in the beginning, which meant they successfully trained longer and longer durations of quiet behavior which translated to fewer and fewer treats. With just a clicker, some treats, and a sense of humor, this formerly hysterical puppy is now calm and fun-loving, and he shows off his tricks for visitors. This case study is an example of using simple and fun training to resolve big and small problems and keep families together.