The Problem with Shock 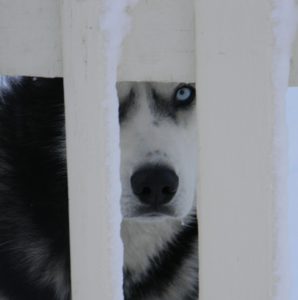 A dog who is shocked may go into a state of shut down, or a global suppression of behavior, whereby owners mistakenly assume he/she is now “trained;” in reality, however, the dog has become afraid to do anything at all © Can Stock Photo/shauna2286

It isn’t that shock collar training doesn’t work, because it does. The question is at what price? Some extremely skilled trainers may be able to offset some of the problems shock collars can cause. However, shock collars are for sale at almost every pet store making them readily accessible to the general public. A shock collar can potentially lead to very serious problems. There are a multitude of other powerful training options including obedience, behavior management, and positive reinforcement.

Malfunction
The first potential problem is that the unit itself may malfunction. Malfunctioning shock collars can cause electrical burns, creating holes in the affected dog’s neck and causing serious physical and emotional damage. To prevent this from happening never leave a shock collar on an unsupervised dog. This presents a problem for owners who use in ground shock fencing which makes use of a boundary that shocks the dog if they cross it. By design this particular type of shock collar is left on an unsupervised dog.

Logistical Issues
Any clicker trainer can tell you that timing and reward delivery are mechanical skills. When you are a clicker trainer, if you click late or fumble to get your treat you haven’t done any harm. Learning may be delayed or the behavior may not be quite what you wanted but you have not hurt the dog. For effective shock collar training, superb timing is needed, a skill that even very few professional trainers possess. Another logistical issue is to be effective the collar must be on the dog, this means the dog will become “collar wise” i.e. they will learn when the collar is on and when it is not. Many dogs would rather run through the fencing and endure a shock than avoid reaching other dogs or people. For these dogs, the underground shock fences are ineffective and for the unprotected people, children and dogs the situation is potentially dangerous. In addition users of underground shock fencing can forget to replace batteries making the shock fencing ineffective.

Abuse
Shock collars can too easily lead to abuse. Many people don’t want to hurt their dogs. Thus they set the shock at a low setting which is typically ineffective for stopping the undesired behavior. They then raise the setting and again this is ineffective. So the setting is raised yet again. Since the dog is exposed to the pain gradually, the surprise effect is lost and the shock may not be effective at all.

As trainers we must understand that some people feel powerful when punishing a dog. When a person of this type is given a shock collar it can lead to a vicious cycle of abuse. Many professional trainers have seen dogs “housetrained” with shock collars. In one particular case a terrier had learned to avoid urinating in front of humans, not a useful concept when you want to housetrain a dog. The professional trainer who rehabilitated this dog had to work months to undo the damage that had been done to this small terrier. Without the use of a shock collar she housetrained her and placed the dog in a loving home where the owners adore her and are committed to training without pain.

Side Effects
The primary reason shock collars are effective in stopping behavior is because they hurt. The problem is that when you train with pain you have unwanted side effects. These side effects are called fallout. Murray Sidman, a famous behavior analyst, wrote an entire academic text on the topic which those looking for a thorough exploration can read (Coercion and its Fallout). Fallout is when we use shock that will be associated with both the trainer and the training process causing stress for the animal. That stress can then be associated with the behaviors we are training, with the equipment we are using, the training field and of course with the trainer.

Slow Work and Frantic Work
Dogs who are shocked during training are stressed. In a scientific study dogs who were trained with shock displayed stress signals when they were approaching the training area. This behavior is the opposite of what we want as dog sport enthusiasts. Dogs that are trained with shock will frequently work slowly and deliberately. They are over thinking and being very careful to avoid being shocked. If the punishment of the collar outweighs the joy of the sport, they won’t love their work and won’t do it with speed and happiness. Of course highly skilled shock collar trainers can force a dog to work quickly. It’s simple. If the dogs work slowly they are shocked if they work fast they avoid the shock. In behavioral science this is called negative reinforcement. The dog’s behavior makes a bad thing go away, so the behavior increases. It does work, but it does not make the happy attitude that training with positive reinforcement does.

Stress
The bottom-line is that shock can cause stress. In a well known experiment Stanley Milgram showed that shocking another being is very stressful for most humans. Professional trainers should be familiar with Milgram’s obedience to authority studies. Authority carries with it power, and that power is something that should not be exploited. The reality is that if you have credibility people will comply with even abusive training instructions. A dog who is shocked for several different behaviors may go into a state of shut down, or a global suppression of behavior. Owners may mistakenly assume the dog is now “trained” because the dog is suddenly very quiet and not doing anything. In reality this dog is afraid to do anything. The ultimate step of the global suppression of behavior is learned helplessness. This occurs when the dog fails to do anything, curls into a ball, and gives up. Many who work with rescue dogs have seen the traumatic and long lasting effects of learned helplessness.

Aggression
A dog that is being hurt may become aggressive. If a dog has a history of aggression the use of a shock collar is particularly dangerous. Aggressive behavior should NOT be punished (suppressed). When you punish a dog for aggression and you don’t teach a substitute behavior you simply hide the problem. You then open yourself up to a much bigger problem where without warning the dog may become aggressive. You may have punished the barking, lunging and growling, so the dog may go straight to biting which is VERY dangerous.

Shock Yourself
Shock collar users often attempt to argue that the shock doesn’t hurt. For this specific reason I bought a shock collar and used it to shock myself. It does hurt. It is common for underground fencing companies to put the shock collar on the lowest setting to show the owner the shock sensation. Do not be fooled, a shock collar works if it hurts.

E-Collar
Many shock collar supporters use euphemisms for shock collars to soften their image. They call them e-collars, training collars, e-touch, stimulation, tingle, etc. They do this to avoid the fact that shock collars shock.

Ideal Training
The ideal training methods prevent unwanted behaviors before they ever occur. Trainers read their dogs’ subtle body language signals to avoid stress which may lead to aggression or fear. Ideally a trainer never sees the unwanted behaviors in the first place. They play with their dogs instead of forcing behaviors, thus deepening their bond with their dogs. They act instead of react and their dogs love them for it. Most widely recognized associations in the world forbid the use of shock collars. A well informed trainer should not need to use shock. Sports, tricks, and training are supposed to be enjoyable and reinforcing for canines and humans on their own merit without the use of force. Let’s make training and competition fun, and shock free.

Truly Dog Friendly: https://www.facebook.com/pg/trulydogfriendly/posts
About the Author
Angelica Steinker PCBC-A owns and operates Courteous Canine, Inc. DogSmith of Tampa, a full service pet business and dog school specializing in aggression and dog sports. She is the national director of training for DogSmith Services, and co-founder of DogNostics Career College.
Tweet