The Science of Force-Free Learning: How Our Pets Learn! 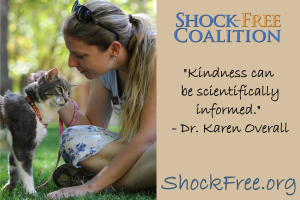 Here at the Pet Professional Guild (PPG), we like to focus on building relationships with our pets by using positive reinforcement to train new skills, and to build new behaviors as replacements for problematic ones. Because the emotional brain inhibits the rational brain (and vice versa), nobody, and that includes our pets, can learn something constructive and pleasant when in a fearful or anxious state.

Positive reinforcement means giving an animal access to something he desires (e.g. food or a toy), which makes it more likely he will repeat the behavior that was rewarded and ensure he maintains a positive emotional state. Pet owners may not always be aware that an animal’s behavior, particularly in cases where a behavior is seen as inappropriate or problematic, can be the result of stress, fear or anxiety. In such cases, rather than reprimand the pet, we must endeavor to understand the emotions he is experiencing in any given context or situation. Once we have done that, we can then begin to implement a protocol of respondent conditioning tailored to changing his emotional state from negative to positive, meaning he will be calmer, more able to think, and thus better able to start learning new behaviors.

PPG’s recommended respondent and operant conditioning protocols are both effective and humane. Many would agree that fearmongering, threats or punishment are not an effective – or acceptable – way for adults to resolve their differences, so it should come as no surprise that physically correcting pets, just like hitting children or adults, causes more problems than it solves. And there are plenty of scientific studies that reflect this. To cite just one of them, Ziv (2017) conducted a review of the scientific literature on the effects of various canine training methods and summarized that methods using punishment, fear and pain jeopardize both the physical and mental health of the pet.

Our pets’ behavior can be overt or covert. Overt behavior is anything an animal does that we can observe or measure. In other words, any visible behavior we can see and directly impact through our management, care and training. Covert behaviors, on the other hand, are hidden and unobservable. They include actions like thinking and imagining. I am sure we all agree that our pets do both of these, even though we cannot directly see it. (Tudge, 2017).

Working with behavior issues, and specifically cases involving fear, anxiety, or aggression, requires a thorough understanding of the scientific elements of behavior modification. It is also important to be aware that behaviors are voluntary or involuntary. They are either shaped by their environmental consequences or through the association with environmental stimuli.

Involuntary (a.k.a. respondent) behaviors are elicited from an emotional reaction to a situation. In a process known as respondent (or classical) conditioning, the presence of one stimulus begins to reliably predict the presence of a second stimulus (Tudge, 2017). This is not a consciously learned process; it happens automatically and without thought. An example of this would be the association developed between the time of day and your pet getting his dinner, or whenever you pick up your dog’s leash. By association, one stimulus (i.e. the time or day or the pet’s leash) reliably predicts something the pet considers desirable, i.e. a meal or a walk. As such, the time of day or the leash (previously anunconditioned stimulus) becomes a conditioned stimulus and elicits a learned, conditioned response. This will most likely be salivation and movement around the food bowl, or running to the door in excitement. This is known as the Pavlovian (after Russian physiologist, Ivan Pavlov, who is well known for his experiments in this field) response of classical or respondent conditioning.

For pets experiencing fear, anxiety, or aggression, respondent conditioning can be used to help create a positive association between something the pet sees as threatening, and something the pet already knows is fabulous. A good example of this is a dog who barks and growls every time he sees the mailman. If the dog’s owner feeds the dog delicious cooked chicken the moment the dog spots the mailman and continues until he is out of sight, eventually the dog will anticipate the chicken as soon as he sees the mailman. Instead of feeling threatened, previously characterized by barking and growling, the dog will begin to look forward to the daily mail delivery, as it predicts something delicious. This becomes an automatic response, with no expectations of a specific behavior.

Voluntary behaviors are called operants and are strengthened or weakened by their consequences, a process known as operant conditioning  (Tudge, 2009). Operant conditioning occurs when a voluntary behavior is changed. By giving the above barking and growling dog a cue he already knows (such as “look” at the owner or “lie down”) just before the mailman arrives, the previously learned behavior can be reinforced. Behaviors that are rewarded are the ones that are more likely to get repeated and, in this way, a dog can learn an alternate behavior to replace an undesirable or inappropriate behavior. It is important to note that what a dog’s owner considers to be undesirable or inappropriate may not be viewed in the same way by the dog. It is our job to teach our pets, via positive reinforcement, what we do and do not like them to do. For example, many owners are happy to let their dog sleep on the bed at night, while others do not allow this. Dogs cannot automatically know this. It is up to us to teach them.

The Four Quadrants of Learning

We now know that positive reinforcement is defined as the immediate following of a behavior by an appealing stimulus – or the increase of an appealing stimulus – that our pets covet, which results in a strengthening of the behavior. In contrast,negative reinforcement is defined as the removal of an unpleasant stimulus – or a decrease in the intensity of an aversive stimulus –immediately following a behavior, which also results in the strengthening of the behavior. In other words, the pet engages in one behavior to remove the unpleasant, scary or painful stimulus.  This is often called escape or avoidance learning and has a “Whew, thank goodness that scary stimulus has gone!” effect, rather than the “Wow, look what I got!” effect gained from positive reinforcement.

The dog is running away from his owner and the owner applies the shock stimulus while shouting “come.” The dog stops or begins moving back toward the owner. When the dog does this, the owner stops applying the shock. The dog learns that by running back towards the owner the pain can be removed (i.e. the shock is removed). The dog thus learns that he can escape the aversive stimulus by engaging in the alternate behavior. (Note: For a dog to escape a painful or scary stimulus so the behavior can be negatively reinforced, a positive punisher has to be put in place, in this case the application of shock. Positive punishment is defined as the addition of an aversive stimulus.)

In the case of avoidance, it is exactly as it sounds: a dog learns how to avoid a painful or scary stimulus. With a shock containment system, such as an electric, or “invisible” fence, the dog learns to stop moving forward towards the boundary when he hears the warning beep. If he proceeds, then he will receive an electric shock. The goal of his behavior is to avoid the fear and pain this will cause.

In the case of the “invisible” fence, the beep on the boundary system comes before the shock is delivered. Due to his conditioning history, the dog will have quickly learned that the beep predicts a painful electric shock if his current behavior continues. He will aim to avoid this at all costs.

In the case of the electric shock collar, the shock is applied and then stopped when the dog discontinues his current behavior (which is whatever the person administering the shock deems to be inappropriate). There is no actual teaching involved, and the dog is given no opportunity to learn a new behavior. If the aversive device is absent at any time, there is no guarantee the dog will do what is expected of him because he has never actually been taught.

The good news is that we do not need to use any training or behavior modification protocols that utilize escape or avoidance behavior, or that cause fear or pain. Instead, we can reference the growing body of knowledge and findings of the scientific community who advocate for humane, positive reinforcement based protocols, which are known to promote a positive emotional state and therefore improve an animal’s ability to learn new things. In addition, they set an animal up for success, build his confidence, allow him to think for himself, and empower him to make good choices.

Humane and effective animal training procedures lay the foundation for any animal’s healthy socialization and training, and help avoid the onset of behavioral issues or better address existing behavior issues. The correct use and application of positive reinforcement protocols builds new behaviors while promoting behavior wellness and a strengthening of the pet-human relationship. A win-win for everyone.

Join the Shock-FreeCoalition to make the use of electric shock in animal training a thing of the past.