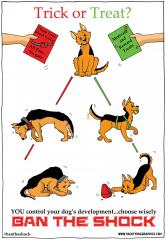 With recent events in Scotland regarding so called e-collars (the ‘e’ stands for electronic), the debate has been heating up. I thought I would take this opportunity to air a few suggestions to some of the statements that are being made.

There appears to be some serious misconceptions and incorrect information surrounding e-collars that I would like to address in one swoop, here is an excellent platform to do just that.

An e-collar is a collar with a box attached to it that sits on a dogs neck. The handler can remotely operate the collar which can administer one of a few things. The first possibility is a spray, either water or, more commonly used, citronella. Then there are collars that beep, vibrate or give a static shock.

The argument as to whether citronella is a safe option is clearly debunked in Yvette Van Veen of Awesome Dogs’s article Citronella collars – may contain: Pesticides, booze and refrigeration coolant. Van Veen clearly explains in this article that there is a rather large risk to a dog’s health using citronella.

The next use of the e-collar is the vibration. Mostly this function is suggested to be a good tool for deaf dogs. This sounds like a sensible option as it gives a handler a clear way to get a deaf dog’s attention. On doing my own research I posed this question to Karen Lawe of the Deaf Dog Network. Karen trains, lives and advises on Deaf Dogs, she had this to say: “Deaf Dog Network members have found they have to be careful when purchasing a vibration collar as so many have the shock option now. It is the Deaf Dogs Network’s choice to encourage people to train their dogs a reliable check in and recall rather than rely upon a vibration collar. Although vibration collars can have their uses, many dogs are fearful of them even if carefully introduced. If banning a vibration collar means there will be no use of shock collars in this country also it is not such a heavy price to pay.”

Another cause for concern regarding the e-collar is the product’s reliability. The Centre Of Applied Pet Ethology article, Shock Collars; what the manufacturers don’t want you to know gives evidence to the amount of collars that are bought that are faulty, which is seriously worrying. So we can know understand why having a vibration duo shock collar would cause concern. 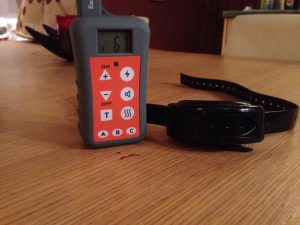 The shock collar: pain only suppresses behaviors, it does not “cure” or erase them

If you are currently using one on the advice of an online forum, friend or trainer, please keep an open mind as you read this. I understand as it appears to you it is working and that is a very reinforcing consequence within itself. I completely understand that perhaps you have an unruly dog and you feel like this is your only option, but it isn’t.

Here are a few reasons I hear regarding the use of the shock collar.

The first one I want to get out the way and lay to bed is “The e-collar doesn’t hurt”.

Right, let’s put aside any emotions or experience we may have with the shock collar and use logic, it’s a good place to start. I accept that the collar could be used on a very low setting where it wouldn’t be painful but mildly irritating, to be used as an attention getter. I will put that point to one side for a minute and come back to it.In order to get rid of unwanted or nuisance behaviors, the dog would have to experience a sensation that got his or her full attention, in my logical brain that would have to be extremely uncomfortable or let’s not beat about the bush, painful.

Let me use an example: A dog barks and lunges at cyclists. You can’t have a dog that does that, it’s antisocial and potentially dangerous. Now of all the people I have asked in my long quest for answers, I asked if they had tried something else first. The answer was “Yes”, they had tried various things like their dogs favourite treats, jerking on the leash and yelling no, doing the “sidekick” (made famous by a certain reality TV dog trainer – I don’t know what else to call it) or squirting their dog with water. Now here’s where I find a hole in the statement, “The e-collar doesn’t hurt.” If none of that worked for you then how is a slight pulse going to do the job? Is it sending some sort of unknown code to the dog? No! People, it is working because it hurts. Which will roll nicely into my next point, IT WORKS!

Please can we stop saying that shock doesn’t work. Pain is a pretty effective way of ridding your best friend of bad behaviors. But it’s how it works that you should be arming yourself with, the shocking truth. It suppresses behaviors, it doesn’t cure them, it doesn’t erase them, your dog still wants to go crazy at that cyclist, but now he or she just doesn’t because of the risk of pain. Sounds like a plan eh? WRONG. Dogs learn through association, what that means is now a cyclist becomes a predictor of pain, which puts the dog in a state of inner fear and fear makes dogs far more likely to resort to proper aggressive behaviors if they can’t escape. They could also associate the pain with the handler, the kid that just walked past, the cat sitting on a wall just in front of them, the dog chasing it’s ball at the other side of the park, the old man with the walking stick…..getting my drift here? Quite simply let’s forget it hurts your dog there are too many factors that can go wrong.

Second one, “I tried it on myself and it wasn’t too bad”. Let’s explore that. Most people I ask to tell me more on this subject, have tried it on either their hands or arms. Have you seen where the e-collar sits on your dog? All the people I asked are adults (I am truly thankful there) so let’s say they are doing the same setting as they are about to use on their border collie. So we can fire this in the middle of the average weight of a male collie which would be say 40 pounds, the average male human weighs say 150 pounds. So that man weighs four times more than his dog, not really a fair playing field is it?

Also, all the people I asked were wearing shoes. Dogs don’t wear shoes, and they sweat through their paws which can make them moist, not the best protection against even a static shock. So let’s look at the static word, static is an electrical current. The most significant risk in terms of hazard is the nervous system. The nervous system processes and conducts the multitude of signals responsible for the regulation of body functions. Such as the brain, spinal cord and sensory and motor organs these allow your dog to sense, move, respond, think and remember. So now are you wondering why a dog that receives a “tap” stays still, doesn’t move and stops lunging? You can’t see this damage, your dog can’t tell you, so why do it? This is a fact of even mild shock. I repeat, it is a fact.

The next one, this is my particular favourite, “Shock prevented my dog from euthanasia.”
Could you please say that out loud and listen to yourself (if indeed you have said it). The fact is, seeking training probably saved your dog from euthanasia, not the collar. Yes, because even punishment based training works but if you are still considering it, read this article again and then read this study. Another reason is maybe this is what you have been told and you are convinced that this is the absolute truth. It isn’t though, why? I hear you ask… I say THERE ARE ALTERNATIVES!

There are alternatives to every scenario I have heard where shock collars have been used, even livestock chasing and snake avoidance. The problem is that shock is instantly obvious in results but slower at showing the cracks. But in most circumstances the cracks do appear. Alternatives should always begin with the welfare of the dog at the forefront. Management should be the first strategy. Management is a pretty powerful tool in caring for dogs; it is by far the easiest way to resolve a lot of situations that can cause stress to both handler and dog.

Positive training, I could write a whole article here but there is already lots of evidence out there to support the use of positive reinforcement over shock collars that it completely debunks the use of the collar.

Okay, we know and accept that positive training may take longer, but by laying good foundations then building on them we can then evaluate exactly when a method may need reviewed or tweaked to suit the individual dog, client and circumstance. All this because positive reinforcement is not just one thing, it is a box that contains a million humane and efficient tools. Your dog is worth that, right?

I am now going to return to the attention getting mild sensation, ever thought of using a whistle? We can teach a variety of attention getters in a fun, interactive and fear free way which your dog just can’t ignore because he or she loves that sound or word because it has through association been paired with something that rocks!

Just now we aren’t just saying no to a collar, we are saying yes to a change in how dogs are treated in the name of behavior modification and training.