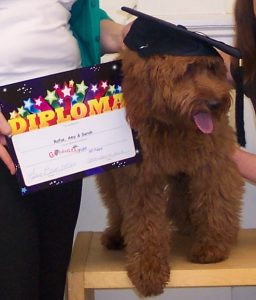 The other day, I got a good laugh reading the bumper sticker of the car in front of me: “My Dog Is Smarter Than Your Honor Student!” This got me wondering as we “pet-parents” often do, about how smart my own dogs are. By coincidence, I happened upon a newsletter from a local veterinarian’s blog listing the top seven most intelligent dog breeds (border collie, poodle, German Shepherd, golden retriever, Doberman, Shetland sheepdog, and Labrador retriever). Unfortunately my dogs were not on the list, but undeterred, I went to the American Kennel Club website to see if they had a list and in addition to the aforementioned seven, they listed the papillon, bloodhound and Rottweiler. And no, my dogs didn’t make that list either! Now to be clear, there was no mention of the research for their lists, so I decided to dig deeper and lo and behold, I found the “bible” written in the 1960s by John Scott and John Fuller: Genetics and Social Behavior of the Dog.

Their ground breaking work expanded over a 13-year period, compiling data from 500 purebred and mixed dog breeds and while some dogs excelled at certain tasks, none proved to be more intelligent than the others. According to Scott and Fuller, “There is no breed that came out uniformly with the highest rank. Even on individual tests, a breed may be first in one part and last in another. On the basis of the information we now have, we can conclude that all breeds show about the same average level of performance in problem solving, provided they can be adequately motivated, provided physical differences and handicaps do not affect the tests, and provided interfering emotional reactions such as fear can be eliminated. In short, all the breeds appear quite similar in pure intelligence. On the other hand, we have evidence from the delayed-response test that there are enormous individual differences within breeds for developing certain capacities.”

That work was completed 51 years ago, and the research moved in a different direction. With scientists taking a pejorative view of domesticated dogs, considering them to be just a diluted copy of a wolf, they instead went on to studying just about every animal on the planet, including all the groups of mammals that are related to dogs such as wolves, foxes, jackals and coyotes.

Fortunately, in the last 10 years, however, other scientists began looking at how domestication has impacted dogs emotionally, physically, physiologically, and hormonally and the results are nothing short of astonishing as it is domestication that sets our dogs apart from all the other species and that close association with humans for thousands of years is why they have such a high degree of intelligence!

Brian Hare, a professor at Duke University recently set up Dognition, a canine cognition laboratory where he and his colleagues use simple tests to see how dogs solve problems in five different areas of competency; the data is then put into a computer and categorized into one of nine canine personalities. This would be a laborious task, if not for Hare’s Dognition website where ordinary humans can become citizen scientists by registering their dogs and conducting the same simple tests which are then compiled and categorized by the Dognition researchers, in this growing database.

According to Prof. Hare, it is friendliness that makes dogs intelligent! In his book, The Genius of Dogs, Hare explains that dogs are a very successful species that evolved from wolves. It was these “proto-dogs” that were less fearful of humans and therefore able to move in closer proximity to where humans were living in order to eat the garbage that humans left at dumps. The “less fearful” of the species bred with other “less fearful” “proto-dogs” and their offspring moved in closer to form symbiotic relationships with humans.

And now that canine cognition is the hot new research, people still want to know, if dogs solve problems according to breed? Or whether having a trainer vs a lay-person owner is a factor? Similar to Scott and Fuller’s conclusions, the Dognition results, which take into account, pure breeds, trained and untrained and mixed breeds, have shown that none are more intelligent, but rather they excel in different ways of solving problems.

Thanks to advances in positive reinforcement training along with canine cognition we can train with gentle methods, and provide our companions with brain games, all of which provide enrichment and bonding opportunities for our smart four-legged friends.

So take heart, it doesn’t matter what breed or breed mix you have, because he IS smart, just not smarter than other dogs, however he may be smarter than an honor student!