The Unintended Consequences of Shock

(Confidentiality Notice: Names in this blog have been changed to protect privacy, but the facts remain unchanged. Photographs have been used with written consent.)

Betsy is a kind person who contacted a shelter in June of 2016 to help find a nice family dog to share her life with through adoption. She learned of Zelda, a female one year old mixed breed.  Zelda’s online biography suggested she was “fine” with other dogs and was “friendly” with people, but jumped on them “to say hello.”

Little was known about Zelda except that she survived as a stray and was captured, spayed, treated for kennel cough and placed in a foster home in the course of one week. During that week  Zelda snapped twice at two of the foster family dogs.

Stress trigger stacking and a presumably high level of cortisol for days at a time must have taken a toll on Zelda.

Betsy adopted Zelda and lived in a small town.  She observed that during leash walks Zelda became over-aroused upon seeing other dogs, pulling hard on the leash toward the dog, uttering high pitch stress vocalizations. During one of those walks Zelda bit Betsy’s lower leg but did not break the skin.

Then Betsy moved to a large city, living in a three-floor apartment building where lots of other dogs live. Some of them are dog-dog reactive. The move amplified Zelda’s daily exposure to anxiety inducing stimuli.

Being a responsible pet steward, Betsy sought the help of a professional trainer in September of 2016. She agreed to a seven day board-and-train schedule and surrendered Zelda to the care and custody of a man she trusted would help her dog. 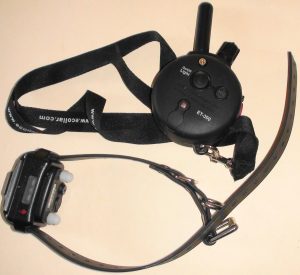 Five days later the trainer called Betsy reporting “Zelda is OK now, but she stopped eating yesterday. You can come and pick her up early.” When Betsy reclaimed Zelda the trainer gave her a shock collar, instructing her to press the (shock) button to get Zelda’s attention, and whenever she got excited about other dogs.

After the shock trainer practiced his craft Zelda began delivering frequent serious bites.  The consequences of aversive methods and equipment such as electronic shock are well established in scientific literature, but Betsy was not aware of them.  She expected the trainer to do what was best for her pet and not make matters worse.

Following the trainer’s advice Betsy began using the shock device during walks.  During one walk Zelda became excited beyond control upon seeing another dog and bit Betsy on the lower leg. This time she broke the skin through a winter coat.  It would not be the last painful bite. 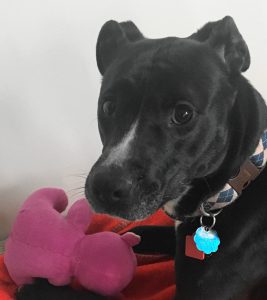 To bite, or not to bite?

By February of 2017 Betsy stopped using the shock collar out of concern “it was making Zelda’s behavior worse”. By spring, when more people began walking their dogs, the frequency and severity of redirected bites increased dramatically.

Making matters worse, Zelda evidently learned during shock “training” that communicating her fear of other dogs was a painful choice, so she stopped barking, growling or showing her teeth.  She went straight for a bite, or two.

It was April 2018 when Betsy contacted me for help. By then she was using a Martingale neck collar and a body harness, with two chain leashes, and Zelda was on two daily behavioral medications. Still, she was virtually out of control during walks and the bite risk was substantial. 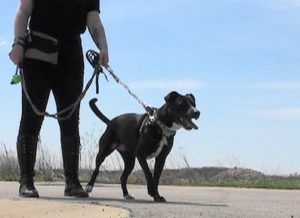 Zelda was out of control for 30 minutes.

Betsy told me she attributed the escalation in Zelda’s aggressive behavior directly due to use of the shock collar, and blamed herself for “not researching the trainer” well enough.
Sometimes even when an intelligent and caring pet steward does their very best to research the trainer they are considering hiring, it is not enough.

Angelica Steinker painfully recounted several such experiences during a PPG World Services podcast on “The Dark Side of Dog Training and Pet Care.” Her article, by that title, was the cover story in BARKS from the Guild, March 2018, pp. 14-21.

In one conversation Betsy tearfully blamed herself for “failing Zelda” and I spent an hour consoling her. Betsy worried that she had no way to keep the dog she loved in her home and remain safe, or keep others in the community safe. Her entire life had changed and she felt trapped.

I was at once empathetic, and angry.

My empathy was with a kind and caring person who wanted only to adopt an unwanted dog and give her the best possible life for the next decade or more. The dog she adopted was not the one she thought she was adopting. Betsy confessed that if she knew then what she knows now, she would not have adopted Zelda.

My anger was directed at the current dysfunctional nature of the shelter and rescue system which far too often does not conduct temperament or sociability tests and re-homes behaviorally unhealthy dogs to unsuspecting families who are not seeking a “project dog” and so they are quite overwhelmed with the reality of the situation…after having bonded with the pet.

Love traps the caring pet steward, and if they ultimately must give up their dog the wound is deep and enduring. The resulting chasm is often filled with remorse, guilt and self-blame.

I am also angry with so-called trainers who use outdated and harmful methods and equipment, do not disclose to pet guardians what they will do to their dog, and then take no responsibility after having inflicted serious behavioral damage on the animal. Often it is force-free trainers who are left desperately scrambling to repair the damaged dog, help the traumatized steward, and avoid the Sword of Damocles (euthanasia) hanging overhead.

Dogs like Zelda who have delivered nine bites to three adults in two years are not likely to survive another ride in the roller coaster we call the shelter and rescue system. Too many canine professionals do not survive the ride either, by burning out and quitting, or worse.

Dr. Sophia Yin, you are not forgotten.

There are many problems in this scenario. Shelters and rescues need to do behavioral assessments so prospective adopters know what they are getting into, and trainers need to practice full disclosure so pet stewards can make informed choices. That alone would go a long way toward saving people like Betsy and dogs like Zelda from daily lives filled with anxiety, fear and guilt.

Pet professionals and stewards alike can become part of the solution by joining The Pet Professional Guild where pet stewards enjoy free membership.  Learn more about the use of shock in animal training and join the Shock-Free Coalition to help eliminate shock devices from the supply and demand chain.  When considering hiring a pet professional you  may use the AVSAB position statement on choosing a trainer and iSpeakDog guidelines.

Gratefully, Betsy gladly accepted my Project Trade offer and the shock collar now rests harmlessly in my growing collection.  I accepted the Martingale collar for a bonus discount. Board-certified veterinary behaviorist Dr. Amy Pike graciously offered to consult Betsy’s family veterinarian, we are using Chirag Patel’s excellent instructional YouTube video on Baskerville muzzle training, and I am eager to begin desensitizing and counter-conditioning exercises in a remote location where we will not encounter random dogs.

The road ahead is not clear, but we are heading down the force-free path as a team.  Zelda’s life depends upon it.