The What, Where and When of Rewards 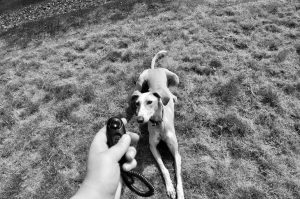 If you see something you like, reward it to increase the likelihood of the dog displaying that behaviour again © Lily Mickleburgh

The use of rewards in dog training is becoming increasingly popular as an effective way of encouraging desired behaviours. However, subtle differences in what you use as a reward, where and when you reward them, can all change depending on your end goal. This may also vary depending on breed traits, age of the dog and whether you want to build energy or encourage calm in your goal behaviour.

WHAT is the motivator?

Toys are a great way of building energy and enthusiasm for something like heel work or recall, as it doesn’t add to your dog’s daily calorie intake and you are making yourself more interesting and fun to be around for your dog. However, dogs that are easily over aroused or have poor impulse control, will struggle with this sort of reward, as the excited and impulsive side of the brain will take over, making it more difficult for the dog to take in information and think rationally. It is also more time and energy consuming than feeding a single treat.

As food is a primary reinforcer, most dogs are happy to work for it. Food rewards replenish energy used in thinking and exhibiting the behaviour you are training. Small, semi-moist treats are quick to consume which means you can do multiple repetitions in quick succession. Using food to reward a behaviour can also help to encourage calm and rational thinking, especially if you are rewarding stationary behaviours or shaping.

Life rewards are an extremely powerful reinforcer if used correctly. Your dog wants access to something in the environment and once the required behaviour is performed, you allow the dog access. This may not always be suitable but is great for use as a jackpot reward. This is the sort of thing your dog will remember and will strengthen behaviours just via single event learning.

If you want to build energy or enthusiasm into a behaviour, or allow your dog’s breed traits to be part of the reward, you can use rapid movement, allowing the dog to chase or catch their toy or treat reward. However, chasing and catching usually occurs away from the handler and the behaviour that is being taught. So, although this may be your best option with specific dogs it must be noted that it is more time consuming and impulse control will also need to be built to prevent the dog from breaking position in anticipation of the reward.

The most effective reward delivery occurs at your end goal and further, encourages the underlying emotion you want to build into the behaviour. For example stationary positions or stays, you would want to deliver the food reward in the exact position you want to encourage calm in. This is especially important for shaping behaviours, as when we reward each step of shaping it is far quicker to build on the behaviour you are already being presented than breaking position and starting again from scratch.

WHEN do you reward?

If you see something you like, reward it to increase the likelihood of the dog displaying that behaviour again. However, when teaching something more advanced you need to have a strategy in place. If you are planning a formal training session, you must decide which criteria will be rewarded. Make it as easy as possible for the dog to get it right but quickly build on it. This usually creates an enthusiastic and confident learner.

If the dog is getting it wrong more than 50 percent of the time, make the training easier. This may change during the session, as you have to be adaptable and ensure the dog does not get discouraged or frustrated. The best way of communicating to your dog that they have done something correct and will be rewarded, is to use a marker (clicker or verbal). The marker should be a clear, consistent and punctual signal that marks the moment of the behaviour we are rewarding. A reward always follows the marker and eventually becomes a conditioned “joy” stimulus that is recognized through primitive pathways of the brain. Keep in mind that your marker needs to be delivered at the exact moment that the wanted behaviour is displayed to be able to effectively communicate what is being rewarded. However, it is not imperative that the reward is delivered as fast as possible as the dog knows that behaviour is going to be rewarded. Without using a marker, it may take your dog longer to learn what behaviour was being reinforced, especially if it is complex.

Should you reward behaviours that are given with poor or little effort? This entirely depends on the dog. Do they give up quickly or become frustrated easily? Will they walk away or put in more effort if you only reward their best? To utilize this system rank your dog’s favourite rewards so that you can easily communicate with your dog when they need to try harder. For example, a speedy and direct recall will result in their #1 favourite reward, where as a slow amble will only result in a token reward i.e. kibble.

As you can see, rewarding your dog may not be as simple as you first anticipated. Keep in mind your end goal and the emotional state you would like the dog to be in when performing the behaviour. All dogs are different so be sure to take time to figure out what is rewarding, only then will you be able to utilize that to the best of your ability in training.

Lily Mickleburgh owns and operates Suppawt Dog Training based in Royston, Herts, England, which is a bespoke service offering support and training for rescue and reactive dogs. Her passion is helping owners and their dogs communicate effectively and build a long lasting partnership. She gained a first class degree in Animal Behaviour and shortly after began working as the dog trainer and behaviour coordinator at the National Animal Welfare Trust in England, and strives to continuously educate herself in the most up-to-date scientific research. She has a soft spot for rescue dogs and strives for that lightbulb moment when a dog learns a new behavior through positive reinforcement training. She recently released her first book, ‘Here to Stay – Training your Rescue Dog.’