The Words We Use! 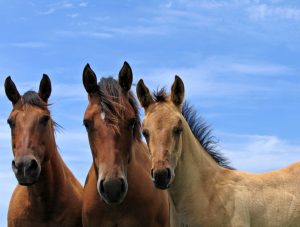 Stereotypies borne of frustration with the environment are a common problem for equine behavior consultants and owners should be approached with empathy. Photo © CanStock Photo

The more I work as a behavior consultant, the more I realize how much we are all influenced by both the opinions and attitudes of those around us and, possibly more importantly, how the words we, and other people, use.

One of the challenges for equine behavior consultants is the problem of stereotypical behavior. For those of you aren’t horse professionals; stereotypies in horses most commonly occur in the stable although occasionally this can be transferred into the field environment.  The behaviors most prevalent (although there are others) are windsucking, where the horse gulps air repetitively; crib biting, the horse repeatedly grabs something like the top of a stable door or fence post with his front teeth, arching the neck and grunting as he pulls back and lets go; and weaving where the horse stands swinging his forequarters, head and neck laterally back and forth usually over the top of stable door, the front feet often lift rhythmically off the floor with the moment and sometimes the whole body is involved (Mills & Nankervis 1999, Mason 1991, Hockenhull & Creighton 2014, Kirsty et al 2015).

Just to summarize, these behaviors are documented to be associated with frustration of natural behavior ranging from feeding routines and fodder types; social isolation; lack of freedom and ability to ‘free range’.  If there’s interest I’d love to blog more fully on these topics as I’m currently researching them and have lots of information to share if there’s interest.

However, for today, I’d like to share the challenge I meet when talking to many horse owners about these problems.

In the mainstream horse-world these behaviors are very often termed ‘stable vices’. In fact this term is often the one used by large organizations who govern the teaching of horse riding to the wider public certainly within the UK, I’d be interested to know if this is more widespread?

Within behavior work we tend to use the term “stereotypy” and widely recognize this as a behavior problem, understanding it has underlying causes and some of those causes may be neuro-biological (McBride & Hemmings, 2009).  In fact the Oxford English Dictionary definition of stereotypy in this context is:

Zoology “The frequent repetition by an animal of an action that serves no obvious purpose”, the pathology “persistence of a fixed or stereotyped idea, mode of action in cases of insanity”.

Ultimately these definitions recognize this ‘problem’ as a mental health affliction for the animals as do Hothershall & Casey (2012) who term the behavior ‘pathological’.

Stereotypies in horses do also highlight a welfare concern as it is widely recognized within the literature that horses displaying these behavior do as there is some deficiency in their environment, living or work conditions either in the present or past tense that has triggered this behavior often associated to management risk factors and stress (McGreevy, 2004, Hothershall & Casey, Mason, 1991, Hockenhull & Creighton, 2014). In-other-words – I see these behaviors as red-flags to the horse being a) a possible welfare risk b) psychologically ‘ill’ for want of a better word c) a horse in distress who needs urgent assistance with his living situation d) usually with an owner in need of practical and emotional support.

The other side of that coin is the approach of horse-owners.  I certainly don’t say that in condemnation because attitudes are formed on the basis of learning from others; social influence and the words used that create perceptions of what is going on.

For the vast majority of horse owners who consult for help, these behaviors are known as ‘stable vices’.

Vice; “depravity or corruption of morals; evil, immoral, or wicked habits or conduct; indulgence in degrading pleasures or practices”.

In this simple exchange of words our horse has gone from suffering a pathological, welfare based mental health problem to being an immoral, indulgent being who is deliberately engaging in wicked practices (and probably deliberately to annoy us many humans believe).

This creates a problem for the behavioral practitioner because immediately you have contradictory beliefs and perceptions to that of the owner (often but obviously not always). In compassion for the owners it’s also worth noting that many owners who have their horses on livery yards are under huge social pressure to resolve the problem.  A stigma is often attached to these behaviors (McBride & Long 2001) often related to the anecdotal belief that horses imitate these behaviors, probably augmented by the belief they’re being ‘naughty’.  Owners may find themselves socially excluded, ostracized, bullied or even asked to leave yards because of their horse’s behavior and other owners beliefs that the horse may ‘contaminate’ their own with the behavior.  (It’s worth noting that there is no solid scientific evidence that horses imitate this behavior, where multiple horses are displaying the behavior on the same yard is it worth considering that the horses are all possibly responding the same inappropriate living conditions!).

Awareness and compassion for the client beliefs and social situation triggered by previous instruction, peer pressure and wide spread dogma helps us engage with the client more fully with compassion.  For these owners they truly believe their horse is misbehaving and therefore their expectations of you, the behavior consultant, is one of ‘stopping the horse’ from doing something.  They are often distressed themselves by the problems of keeping a horse with this behavior and maybe expecting ‘a quick fix’ to resolve their own problem on the yard.

By meeting their anger, frustration and/or anxiety with understanding and compassion we can reframe their thinking and helping them understand why the horse is really undertaking the behavior.  I don’t talk about scientific studies to most owners, unless they ask, instead I help them make connections between what their horse is experiencing and that we humans also have some of these behaviors in response to stress.

I point out that I bite my nails when I’m anxious or stressed – that’s my stereotypical behavior. I do it because I feel mentally trapped by something and that their horse is experiencing a similar problem.  You can use your own analogies, but I find it helps people to understand where their horse is ‘coming from’ and to let go of the notion of the horse ‘being naughty’ in a way that we can all relate to when we recognize our own habits and stereotypies.  With understanding comes a greater chance of engaging the owner to work with you in resolving the underlying problem rather than trying to merely prevent the behavior which obviously leaves the continued welfare problem for the horse and is rarely effective!

Extending that compassionate, empathic approach to other owners can really help (and also build your reputation and business) by maybe offering to do a short presentation to the whole yard on stereotypical behavior and how to prevent it in the first place.  With true understanding for each other and our horses, I usually find, comes greater compassion and support.

Hothershall, B. & Casey, R. (2012). Undesired behavior in horses: A review of their development, prevention, management and association with welfare.  Equine Veterinary Education. 24(9), pp479-485