They Call Him Rocket Man

Dog trainers enjoy the privileged opportunity of influencing the life and welfare of other people’s pets. With that comes great responsibility to only use methods and equipment which are modern and effective, while promoting a positive relationship as the dog becomes a full member of the family.

In short, we must do everything which is in the best interest of the welfare of the pet and their family. 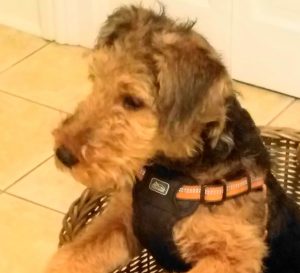 On February 7th of 2016 I began a journey with a Welsh Terrier named Rocket, but everyone calls him Rocket Man.

Rocket was three months old when we began his in-home training process. He learned quickly and the family enjoyed practicing with him in between our appointments. We worked on basic manners, and polite greeting behavior when visitors came to the home and during leash walks.

The family lives near a middle school and a community youth center so there were plenty of children walking, running and riding their bikes past the house several times each day. Rocket learned how to politely step off the sidewalk and pay attention to his handler while they passed. 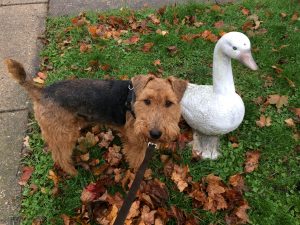 But Rocket showed a tendency to be nervous of unexpected outdoors environmental stimuli, such as a lawn decoration, or a yard sign that was not present the day before and was especially concerned about large noisy trucks which passed by along a county highway just one block away. 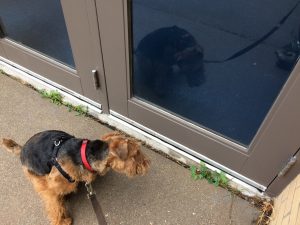 Rocket’s village is situated at a crossroads of two county roads which frequently carry farm vehicles and semi-tractors hauling trailers. I began working on desensitizing and counter-conditioning each time a large vehicle approached. His confidence steadily improved.

He also developed intense leash-reactivity upon seeing other dogs and had strong prey drive toward the many squirrels and rabbits in a neighborhood which was full of walnut trees.  What began as easy leash walking morphed into sudden intense bursts on the leash toward the intended target, especially as squirrels rushed about gathering nuts.  The consequences of sudden leash pulling were sore shoulders and knees on the human end of the leash, and lack of self-control on the canine end.

Rocket began wearing a Balance (no-pull) harness and I focused on loose-leash walking and self-control exercises when exciting triggers suddenly appeared in the environment.  He soon excelled at leash walking, trotting happily alongside me, giving me frequent eye contact. When I stopped walking Rocket automatically sat down and waited. When I turned left or right, he stayed in sync like a sidecar attached to a motorcycle.

I made a game of it playing Stop-n-Go, speeding up and slowing down, practicing emergency U-turns, and maintaining a nearly constant conversation with a perky voice, praising Rocket for his attention, responsiveness to training cues, and good manners.

“Oh, what a brilliant boy you are. Great job Rocket, that was awesome! Yeah for Rocket Man.” 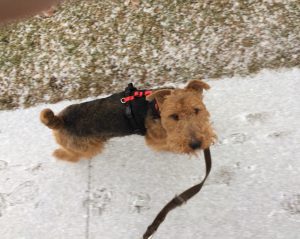 His owners soon saw the results and were able to take him for longer walks, with comfort and safety in spite of snow and ice-covered sidewalks throughout the winter. Rocket was such a superstar I filmed him during an afternoon walk and featured him in a training video.

By spring I was called back to do some refresher training as baby squirrels and bunnies populated the neighborhood. Whenever we encountered wildlife during a walk I stopped, and we played a game. Rocket looked at the critter, then turned to look at me…and I paid him with his favorite foods. This developed into automatic eye contact reflex and a calmer dog.

At the end of one walk Rocket and I approached a street corner. As we passed the corner of a house, we both looked to our left and saw three squirrels and a rabbit, no more than 10 or 15 feet away.

Months earlier Rocket would have launched himself at the critters, but on this day, he stared at them, and abruptly turned to look at me.  I praised his behavior and paid him with a treat. He repeated this several times but and became calmer, sitting on the sidewalk with a relaxed posture as he watched the wildlife. 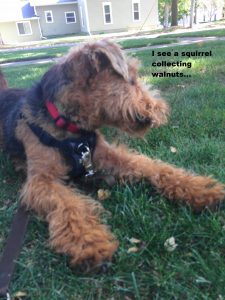 Calmly watching a squirrel on the lawn. No worries.

I would have expected the squirrels to rush up a tree and for the bunny to hop away, but they watched us for a moment…and then three of them returned to foraging and even moved the closer to Rocket. The fourth just watched us.

“Oh, he’s not going to eat us” I can only suppose they were thinking.

Rocket’s training and good manners were quickly back on track and the family asked me to walk him three or more times a week while they were away at work. It was a perfect opportunity to maintain Rocket’s training and reduce his leash reactivity with dogs and wildlife.

By mid-summer Rocket had begun growling when his owners tried getting him off the sofa or their bed. I was summoned back to help and in one hour Rocket learned a new training game and his experiment with resource guarding expired. 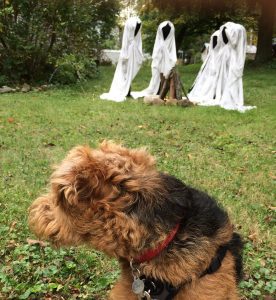 “Are you guys new to the neighborhood?”

As fall approached Rocket made the developmental change from puppy to adolescent. In addition to his hormonal and behavioral changes, there were environmental changes. The squirrels entered frantic nut gathering mode, leaves fell and flew about in the gusty winds, and election signs began popping up in front yards like mushrooms.
These things sometimes worried Rocket as he coped with adolescent fear stages.

Then virtually everyone in the neighborhood put up their Halloween decorations. Rocket’s world had changed from normal and constant too spooky and unpredictable, and I went back to work conditioning him through the process, reducing his fears one by one.

Sometimes a dog trainer is fortunate enough to continue a relationship with a dog, witnessing their progress from puppy to adolescent to adult. I remained part of Rocket’s life and he recently turned three years old.

Prior to Rocket the family had a Welsh Terrier who was that legendary “perfect” dog which we all dream of. Years passed and they lost their dog.  When they got Rocket they smartly brought a force-free trainer on board from the start, and repeatedly reached out to that resource during Rocket’s physical and emotional development to adulthood.  He has become the next “perfect” dog and continues soaring to new heights. 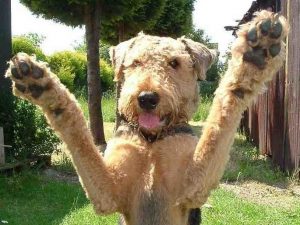 Rocket Man has become a legend in his own time, force-free.