Thunderphobia is the fear of thunderstorms and it can be severe enough to make a dog’s life miserable.  It may be more common than you know.

At least 20% of dogs suffer noise phobias including thunderphobia, according to ethologist Dr. Karolina Westlund, Ph.D.  There are about 80,000,000 dogs in the United States and if 20% suffer thunderphobia the scale of the problem is enormous.

It may be even greater, as Zazie Todd, Ph.D. wrote in Companion Animal Psychology in 2013. 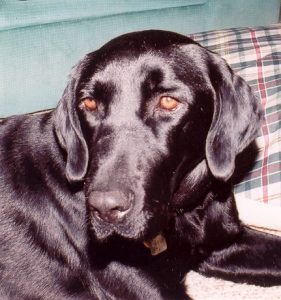 Of the five Labradors I lived with, Jake suffered thunderphobia from the day we adopted him at 18 months of age.  He fell into the 20% category of unlucky dogs.

It changed our life in that we had to become proactive pet guardians and change our own behavior in order to get him through storms.  He was also fearful of distant fireworks and low flying planes.  The noisy world was an unpredictable and scary place for poor Jake.

That was years before I knew anything about training and behavior but we took him to the basement to avoid the flashes of lightning and played music to mask the thunder, playing games with him to keep him in a happy state of mind until the storm passed.

By sheer dumb luck, we did things which helped Jake.

Most dogs develop thunderphobia in their adulthood.  Oddly, Jake was thunderphobic earlier in life and as he grew older the symptoms diminished and then totally disappeared.  As an elderly dog he grew hard of hearing and cataracts clouded his vision.

I can only assume the auditory and visual stimuli no longer triggered stress responses in Jake, but that is just my guess.  It may be different with other individual dogs and more research is needed to sort this out.

Today I have a better understanding of thunderphobia.

Symptoms of thunderphobia are the usual suspects among canine stress signals.  They may include pacing, inability to settle, cowering, hiding, bodily elimination and inappropriate chewing, among others.

These behavioral changes may occur long before the storm is overhead, as dogs are very good at connecting the dots through associative learning.

Bowser may learn from experience that first the sky grows thick with clouds of a darker sort.  Then wind patterns change, temperature falls, and barometric pressure changes.  Next there is the sudden calm before the storm.  The behavior of wildlife changes too.  I have observed songbirds take shelter and grow silent prior to a storm.

Bowser notices these things and concludes “Uh oh, something wicked this way comes!”

Dogs are pretty good at figuring this stuff out on their own.  I suppose it is part of their evolutionary adaptive survival process.  When a storm approaches, take cover!

With a better sense of hearing than humans, dogs may hear distant thunder long before we do. Distant thunderclaps which steadily grow louder always predict a local storm.

Dogs also sense changes in polarity, as Dr. Ian Dunbar explained in his lecture in Madison (WI) in 2013.  To paraphrase, dogs seek dark damp places where there are negative ions, such as a basement, garage or bathroom. 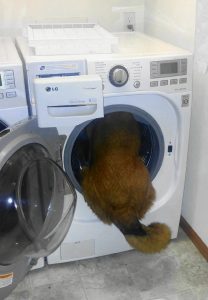 A dog client I worked with found her own solution to impending thunderstorms.  Kona sought refuge in the family washing machine.

Thankfully, there are plenty of options available to pet guardians to help their dogs.

Dr. Westlund prepared a comprehensive PDF “Dealing with Noise Phobias in Dogs” which is freely available for download from her web site.  It contains many specific options for pet guardians.

Another helpful resource is “The Big Bang!  How you can help your dog cope with thunderstorms and fireworks” written by Claudeen E. McAuliffe, M.Ed. 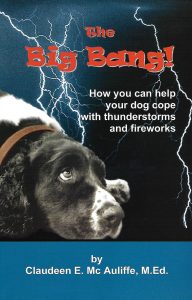 As a certified canine behavior consultant I always inform pet guardians of a wide range of options.  These include behavioral pharmacology*, non-medical calming aids, management and behavior modification exercises.

Last year in Wisconsin (USA) we experienced spring storms about every three or four days, and I received an abrupt increase in appeals for help with dogs who were stressed beyond their coping capacity.  One pet guardian called me to her home to help with one of her dogs who was always extremely stressed during storms.

As I did with Jake, the client took her dog to the basement and played training games with her, offering food-filled toys.  Her dog never settled or enjoyed the toys.

During our consultation I mentioned iCalmDog as an option and pulled the MP3 player out of my training bag to demonstrate.

After I left the client downloaded Through a Dog’s Ear music files and when the storm approached that evening she took her pet to the safe room in the basement, with a food-filled toy and began playing the calming music.

For the first time, her dog settled down and enjoyed a toy until the storm passed.  She observed no signs of anxiety or stress.

What I learned from this experience is that one shoe does not fit all, and I urge pet guardians to give something new a try and see if it helps.  We all want what is best for our pets, so please consider these resources and give them a try. 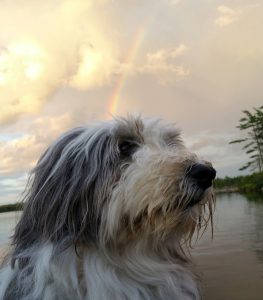 I hope you and your dog find a peaceful rainbow after the storm.

* On the topic of behavioral pharmacology I share lecture notes provided to me by Dr. Gary Landsberg so pet guardians may discuss this with their veterinarian.  I  never offer medical advice, as that is beyond my education and training.