To Chase, or Not to Chase?

I live in the countryside on a 25 acre parcel surrounded by farmland. We developed our property to support wildlife. Needless to say there are critters of all kinds and in all directions.

My dogs love it as much as I do. The major difference is I have no hard-wired impulse to chase the critters. My Labradors, on the other hand, face temptations every day.  A little Angel sits on one shoulder preaching self-restraint while a little Devil sits on the other shouting the contrary. 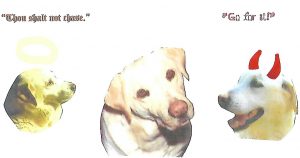 To chase, or not to chase – – that is the question:

Whether ‘tis nobler in the mind to suffer

The slings and arrows of outrageous critters

Or to take teeth against a sea of trouble

And do what dogs like best…to chase and catch critters!

I taught Buddha and Gandhi basic skills such as Look, Touch, Sit, Down, Leash Walking and Leave It. By far, the cue I use most often is Leave It.

One spring day we walked along a trail through light woods, with brush along the fence line to our right. Buddha lagged behind to sniff and pee while Gandhi trotted along my left side. When Buddha finished his business he ran at a good clip to catch up to us.

That was when we heard a loud rustling in the brush, like a scene in a Jurassic Park thriller just before the deadly Raptor erupts from cover and devours some hapless victim. 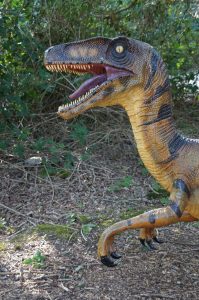 “Velociraptor!” by Tim Dawson is licensed under CC BY-NC-ND 2.0

Only this time it was two adult deer who broke from the brush, stopped on the grassy trail ahead and faced us…like deer caught in the headlights, so to speak. Then they turned and dashed down the trail.

Buddha had at that moment caught up to me and was already at speed when his focus shifted to the fluffy white tails bounding over the hill. Like a radar guided cruise missile he locked onto the targets and ran even faster.

The words “Leave It” flew from my mouth by reflex. Buddha had by then advanced 50 feet, but he came to a dead stop and turned to face me. I said “Touch” and offered the palm of my hand as a target.  Buddha happily trotted to my side with a look of deep satisfaction on his face.

Perhaps it was the result of a dopamine dump following activation of the seeking system in his brain from chasing a deer, and perhaps it was related to my force-free training method, or both.  In any case, he was happy.

When my dogs hear “Leave It” they respond as if anticipating something good is about to happen, rather than slowly sulking back to me with a worried expression.  That is the difference between teaching behaviors with force-free methods, and teaching fear and pain-avoidance responses through positive punishment methods. My dogs easily give up whatever they pursue (or even catch) on cue.

During the initial learning stage I delivered food as a primary reinforcement, supplemented by perky praise and glowing compliments. Verbal praise thus become a secondary reinforcement. On the trail I carry no food, but a rich reinforcement history over 10 years with my dogs is ever present. 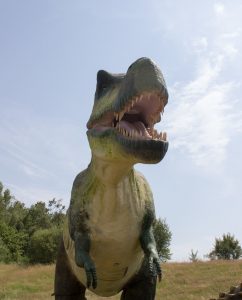 Photo: “Visite a’ Vulcania, Auvergne” by o_schopfer is licensed under CC BY-NC-SA 2.0

During the great deer escape Gandhi just stood quietly at my side watching the entertainment. That was when we heard a second cacophony along the brush line, which persisted far longer than the first one.  It sounded like a Tyrannosaurus Rex was charging us.

Only it was a spotted fawn that finally broke free of the brush and struggled onto the trail. She stopped about 40 feet away, looked straight at us and then bolted after her parents. I interjected a quick “Leave It” as a precaution and both dogs stayed at my side.

Such encounters are nearly daily events, but in the spring there are multiple encounters with baby critters every time we step outside.

Two nights ago Buddha and Gandhi accompanied me from the garage as I prepared to do final barn chores. We stepped out and in unison the three of us turned our heads to the right and spied a one-year old deer munching Hosta’s my wife planted about 60 feet away.

There was a tense stand-off, like the final scene in The Good, the Bad and The Ugly, sans the orchestra and soprano in the background. Who would move first?

The deer turned and ran into the woods.

My dogs simply turned their heads toward the barn and walked on as if nothing had happened. The barn is 300 feet from the house and words of praise were flowing over my lips like water over Niagara Falls as we walked.

Half-way to the barn we encountered a tiny baby rabbit, munching clover along the edge of the driveway. Baby bunnies need time to learn to flee from predators, so this little guy lingered. We kept walking, the bunny finally fled into the grass…and my dogs remained calm.

I praised them for their behavior and we entered the barn.

We watched silently for several seconds. When the bunny finally ducked under the fence Gandhi relaxed and trotted off to sniff the gopher holes in the paddock. No doubt the dopamine was flowing and I was elated to witness another illustration of what appeared to be a default “Leave It” response.

When we headed back to the house I saw a third baby bunny in the middle of the driveway. This time Buddha went into stalking posture and moved forward. Because he was closing the distance I said “Leave It” and Buddha relaxed as we returned to the house. 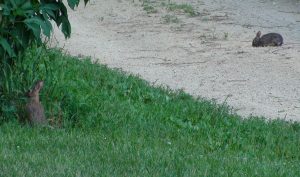 Such encounters seldom require intervention on my part. I speculate that years of not being allowed to chase critters has created neural pathways in my dogs which override the instinct to pursue fleeing prey. The seeds of that fruit were planted long ago with force-free training exercises, followed by practical application during daily walks in various environments.

Matching Law says that behaviors which are reinforced will repeat and the neural pathways grow stronger and the responses are faster.  When we set dogs up to succeed, they can prove us right. Force-free training accomplishes that.

Resources:
Hamlet. A monologue from the play by William Shakespeare