To Prompt or to Reinforce 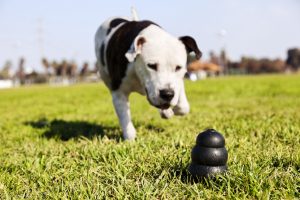 The game of fetch can be trained by using a second ball or toy as a prompt. Photo © Can Stock Photo

First we click and treat until the animal alerts to the click. Then we use the click to indicate to the animal that they have done the thing we want and that they will, in all likelihood, get a treat. Before that, though, we use the treat to lure the animal to perform the behaviour we want. This can be all really confusing for pet owners, especially when you add to this the fact that there are many critics out there who are only too happy to pan positive reinforcement training. These people are telling pet owners that they are bribing their pet and then they ask them what will happen when they don’t have a treat at hand. So you can understand why pet owners don’t know what information to trust.

Not infrequently I get a new client who tells me that they won’t use treats because they know someone whose dog won’t do anything without treats. Because I live in a small community, I usually don’t have much trouble recognizing the trainer who, with the best of good will, relies on constant prompting and constant reinforcement. Recently, because of this, I have been asking myself if I, too, am guilty of misleading clients or simply of giving insufficient or unclear information.

The solution I have come up with is to educate my clients, very early in our professional relationship, about the difference between prompts and reinforcers.

Rather than using food as an example, I have found that a more easily understood approach is to start by talking about prompts and reinforcers other than treats. “Fetch” is very popular in my area. Clients are constantly asking me, however, how to get the dog to bring the object (usually a ball) back to them and drop it at their feet. Their dog will run after the ball and bring it part way back. But then the dog does one of two things: He either drops the ball yards away and then pounces on it again before the owner has a chance to get to it, or he runs almost up to the owner and then does a wide circle just out of reach of the owner’s outstretched hand.

The solution, of course is to use a prompt: a second ball that the owner throws when the dog brings the first ball close enough to be accessible. Slowly, the owner shapes the behaviour so the dog brings the ball closer and closer, all the time using the promise of the second ball as a prompt. Finally the dog is bringing the ball right back to the owner and dropping it at her feet. So the second ball – the prompt – is no longer necessary. The prompt is therefore eliminated but the reinforcer is still a ball.

The big difference is that the reinforcer is having the ball thrown. The promise of having a second ball thrown was merely a prompt to return and drop the first one. What the dog really wanted was for the owner to throw the ball so he could chase it. So it is the throwing of the ball after the desired behaviour is exhibited that is the reinforcer.

The same is true of treats. The treat we use to lure the dog to sit, stand, drop, roll over etc., is a prompt. The same treat that we give to the dog after he has sat, stood, dropped or roller over is reinforcer. That is, it’s part of his salary for doing what we want! It is a failure to fade and eliminate the prompt treat as soon as possible in the training process that causes difficulties later. – Definitely not the use of treats per se!

Of course, there is also the subject of reinforcement schedules to be dealt with later. But I am happy in the early stages of my relationship with my clients if they can see that prompts must disappear as early as possible but that reinforcement is an essential tool in their training kit.