I suspect most dog owners wish their dogs could be off leash and enjoy themselves without restriction, or at least be free of the leash in most situations. In that ideal world a dog could assuredly be called back on cue and no harm would occur if he occasionally strayed afar. 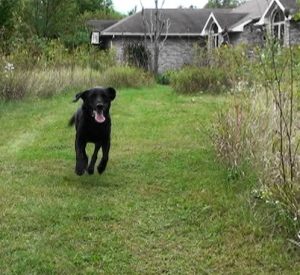 My personal dog stewardship is limited to five Labradors. Three of them were very safe off leash, one was pretty reliable and the other was…a bit sketchy.

To tell the truth his recall was not sketchy at all. It was more like a Rembrandt painting of a Labrador wild child running off to explore the countryside despite my earnest effort to call him back. He enjoyed it even more if I chased after him. 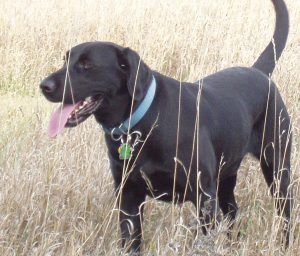 My wife and I adopted Jake at two years of age after he spent six months living in a dog shelter. He ended up in the shelter because his original family never trained or contained him, and Jake ran off to entertain himself. They did not bother retrieving him from the shelter.

Our first subtle hint of his wild nature was during our initial meet-and-greet at the shelter in a small room where potential adopters could get to know the dog of their choice. Jake was completely disinterested in the shelter volunteer, his future family, or anything else.

Jake bounced off the walls spraying his urine liberally in a state of hyperarousal. My wife and I, in a delusional state of adoption, thought “Oh, he will settle down.” We innocently asked how Jake did in a fenced outdoor enclosure. True to his nature he raced wildly about the yard for 20-minutes, paying no attention to any of us.  He was probably searching for a way through or over the fence.

Naturally we adopted him.

We stopped at a pet product store where dogs were welcome so Jake could enjoy picking out new toys and treats. Maintaining my delusional thinking I opened the car door and he dashed off to explore the neighborhood. About 20-minutes later we caught him.

By winter we thought our family bonding was strong enough that we could let him off leash. After all, our 10-year old Labrador (Charlie) was perfect off leash from the very first day. We must have done something right, right?

Jake remained in the yard for about 20-minutes…until a snowmobile whizzed by on a nearby trail. Off he went. He seemed to have a hard-wired 20-minute pre-launch sequence.

He chased the speeding beast a quarter-mile as I stumbled along in deep snow, knowing that either one of us could be flattened by the next mechanical beast as it whizzed along at 60 MPH. Luckily that moment never came.

I knew precious little about dog ownership in those days, and even less about training. What I did understand was the need for management so I built a fenced paddock.

Five years passed and we adopted Buddha. By then I was smart enough to attend classes offered by a force-free trainer and finally learned something about keeping a dog.  That positive experience evolved into my eventual plunge in the world of professional dog training. I have been dog paddling in Force-Free waters ever since. 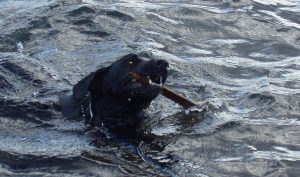 I doubt every dog can be trusted to stay safe off leash, but using Buddha as an example I want to share a few tips on teaching a great recall. My premise is that it has a lot to do with the relationship between dog and handler. I could be wrong, but it has worked for me.

When we call a dog to us it is often in a situation where he is fully engaged in rewarding activity. He may weigh his options and choose the more rewarding one. I want that reward to be me and I tried hard to be the most exciting thing in Buddha’s world.

When Buddha was in the house he followed me about so I took advantage of that and called him to me whenever I walked away. His reward was my company and I threw a puppy party to celebrate his arrival.

I taught him to sit and wait while I hid elsewhere and then called him to me in a game of hide-and-seek. He used his senses to find me and then we enjoyed another puppy party. Coming when called was a great game!

Then my wife and I took the game outside and played it in the yard, hiding behind trees and shrubs. When Buddha demonstrated success in the yard we took the game with us during walks on trails so he learned to come to us despite environmental distractions.
We often encountered wildlife and Buddha learned to give up pursuit of prey and return to us. This has worked consistently with crickets, grasshoppers, birds, mice, moles, voles, gophers, chipmunks, squirrels, woodchucks, skunks, opossum, coyote and deer.

I think it would even work if he spotted Elvis one day. 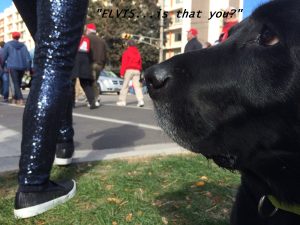 When Buddha returns to me it is with a great big toothy grin, bounding enthusiasm and the most joyful of reunions. If you want your dog to give up interest in something in the environment and come running to you, perhaps enhancing your mutual relationship is a good start.

Buddha seems to agree with that.

Daniel Antolec is the owner of Happy Buddha Dog Training and his Labradors (Buddha and Gandhi) enjoy therapy visits as registered Pet Partners.  He chairs the PPG Advocacy Committee and is a proud Project Trade participant.