A while ago I hosted a tracking workshop for dogs at my hobby farm in the Hunter Valley in New South Wales (NSW), Australia, hosted by Margaret Keast of Jigsaw Dog Training and Behaviour Consultancy, who is based in Newcastle, NSW. I had a blast! The dogs seemed to pick it up quickly and certainly seemed to enjoy it, and it was really interesting watching the different breeds involved and how they processed the task differently. 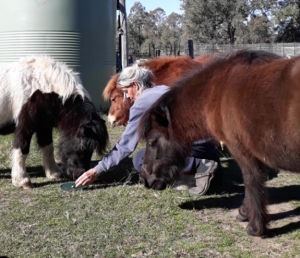 The ponies started their tracking training with food on flat polymer discs on the ground, then proceeded to targeting the treat-loaded socks, and then following the trail by scent © Vicki Conroy

My main recollection/observation from the workshop was the responses of my cattle dogs compared to my German shepherd. The cattle dogs were, “Yep I can do that, goodee food, hmm smell, follow this, yahoo more food, I’m doing it!” While the German shepherd was more like, “Can you please get that food out of my face? I have a serious job to do here, and I certainly don’t have time to eat!”

A long time prior to the workshop I had read an article about horses who could track (by air scenting) and were being used for search and rescue to find lost people in Canada. I wondered how horses would engage in the process compared to dogs. And then I wondered if I could teach them how to do it.

As I had enjoyed the introductory day to tracking with dogs so much, I thought it would be fun to try it with my ponies. The worst-case scenario would be free treats for the ponies if it didn’t work. But it would be an interesting exercise watching the different species learning and putting things together, plus the challenge of me trying to teach them.

I figured I would try it the same way I had started with the dogs (which was actually the only way I knew) to see if it could work and how I could adapt it for equines. There were so many fun things to explore here. Enter the minis. Meet Giselle, pony tracker extraordinaire, and Genevieve, the I-can-play-the-box-game pony (see photos, above).

When we started with the dogs, we used about eight socks that had been well scented (i.e., worn under my shirt all morning). The socks were laid along the ground about 3 ft. apart, and there were smelly dog treats on each one. The dogs probably started out seeing/smelling the treats, then looking to see – or sniffing to see – if there were more treats. And these treats were found on socks which smelled of human.

Once the dogs had established that socks could indicate the presence of food, the socks were then spaced further apart. Somewhere along the way, by following the socks visually or the waft of scented treats to the next sock, the dogs switched to following the smell of the person who laid the socks out, as they couldn’t see where the next sock was. We progressed to adding a turn and a longer trail, and later following an unknown (non-owner) track layer. But that’s a dog story. Back to the ponies…

I used the sock trail technique to start with the ponies too, using horse pellets and carrot pieces in place of dog treats. There were a few drawbacks to start with. For example, horse pellets and carrots are probably not as pungent as cooked liver and heart! Also, the minis weren’t used to raiding my clothes for ‘left-in-the-pocket’ treats, as they generally weren’t inside the house like the dogs are (although they did try).

The ponies didn’t seem to get the idea of looking on the socks for food, and, perhaps unsurprisingly, my pointing to the socks resulted in them following my hand as a moving target, and not following the ‘point.’

I thought they would be able to relate to the concept of food on receptacles (even weird sock ones) on the ground, as they often were given grain feed in feeders on the ground. But it was apparently too much of a context change.

So I added a few steps.

The ponies already knew hand targeting (or plastic bottle targeting), so I moved to targeting a held sock, then a sock held at a lower level, then socks that were on the ground in front of the pony. I clicked and rewarded at the sock for targeting the sock. I repeated the click/treat, putting the sock in differing places, but still close to the ponies. Next, I put a sock on the ground away from both me and the pony, so the pony had to leave me and the treats to target the sock. Good girl Giselle!

The following week, I started the session by pointing to the flat plate with pony treats on, and then by pointing to the socks with same pony treats on. This went well, so we moved onto laying the socks in a line. Initially, Giselle followed inquisitively as we were laying out and loading socks with treats at the same time. From here, we loaded the socks that were already laid out with treats. It seemed that Giselle went to the socks as we were loading them but didn’t go to the socks unless we went too. We did a few trials, but they seemed a little disjointed, so we left it there.

A few months later another friend was present and so we revisited the tracking training. Although the last session had appeared a bit confusing to the human side of the equation, it looked like Giselle had processed everything and knew exactly what was expected.

This time, we humans went straight into laying out a row of socks each loaded with treats. At the same time, we were talking and, apparently, not paying quite close enough attention. We thought Giselle was grazing nearby, but in fact she was promptly following the socks one by one and was going down the line eating all the treats. As usual the pony had learned more than the humans. We repeated this twice just to make sure it wasn’t a fluke and, unsurprisingly, Giselle blitzed it each time.

What we should have done for the following session was to space out the socks in a ‘clean’ area (one that hadn’t been walked on by the track/sock layer before) and slowly built up the distance to when the pony actually started following the scent trail. That installment is still to come. Instead, my next session was teaching the big (16 hands high) ponies the same introduction to tracking (or eating from socks), on the premise that if anything did get lost and needed tracking, at least I may be able to do so sitting down!

It was interesting to note that the big ponies (warmbloods that were 2 years old at the time) who were born at my farm and who had purely positive handling from birth (no negative reinforcement) started eating from the socks and looking for the next ones the second they were put down on the ground. This, compared to the minis who had been obtained as adults and were from traditional negative reinforcement handling backgrounds, and needed more preparation steps. The big ponies went straight to lesson three, or following the line of socks.

Either the entirely positive reinforcement trained ponies were better at problem solving or were less worried about punishment and hence happier to try new things. Or, maybe they were just more used to watching the human do quirky things that could involve food for them. We will continue with our tracking journey. Watch this space!

This article was first published in BARKS from the Guild, September 2021, pp.46-49. Read the full article

About the Author
Vicki Conroy is based in Meningie, South Australia. She is a member of PPG Australia (PPGA) and the Association of Pet Dog Trainers Australia, and sits on the PPGA equine subcommittee. She is a former competitor in dog obedience and dressage to Fédération Equestre Internationale level, spoilt by a very talented and very obliging horse. She is also a former puppy preschool and pet dog manners instructor who practiced in NSW for 25 years. On her equine force-free journey, she began noticing the transposing of information between equine positive training and her puppy class teaching and found the differences and similarities intriguing. Consequently, she is now on a learning curve to take those force-free principles from dog training and apply them to equine training. She also enjoys watching and learning about differences between species by observing the behavior of her own multiple horses, dogs, and sheep.