Training is Simple as A-B-C

Animal training can serve useful purposes, be great fun and strengthen the human-animal bond. It can also frustrate folks, especially if they have not formally studied learning theory.  Welcome to Learning Theory 101. 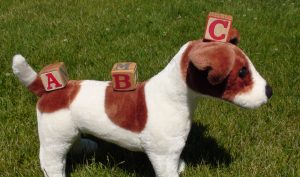 Training is as simple as A-B-C. The “A” stands for antecedent and that is what occurs before a behavior. “B” stands for the behavior that you observe and “C” is the consequence of that behavior.

If I ask my dog Buddha to sit using a word, that verbal cue is the antecedent. It gives Buddha a prompt. I prefer to think of it as an invitation or an opportunity. I invite him to enjoy a reward if he offers me the correct behavior response.

Let’s say that Buddha lies down instead. He was not sure what my word meant because English is not the native language of dogs and he offered a behavior that had been previously rewarded. He did not know what I wanted but he took a guess.

“Sorry buddy, that was an incorrect choice”

Some folks would respond with punishment, but that is not instructional and would only increase Buddha’s stress. Stress triggers the sympathetic nervous system to release hormones like adrenaline and cortisol, which block the learning process.

I do not want Buddha’s brain to float around in a soup of stress hormones…I just want him to sit.

Seeing confusion on his furry black face I start over and give him a new antecedent: a hand signal for “sit”. Buddha responds by promptly placing his wiggly Labrador butt on the floor with a look of happy anticipation on his face. Dogs can learn hand signals far more easily and then they have a behavior response to associate with the word cue, which we may add later.

In consequence of sitting down I reward Buddha with sing-song praises of his high intellect and tell him that he is the joy of my life. His tail wags. Maybe he gets a cookie…and maybe not.  I then cue him to lie down and coax him into a belly rub, which he loves. 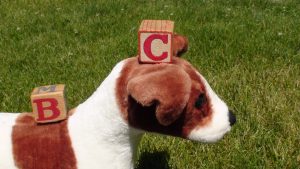 Buddha’s brain is now happily dog-paddling in dopamine and oxytocin, the bonding hormones. The pleasure center of his brain is firing gleeful electrons hither and yon like a canine July 4th display.

“Wow! All kinds of great stuff happen to me when I put my butt on the floor. I’m gonna do that again next time!” Buddha chuckles to himself.

Whatever behavior is rewarded becomes stronger in a process called positive reinforcement. Behaviors that are not rewarded become weaker and eventually stop. With repetition Buddha learns that sitting on cue works for him and other behavior choices do not. He also learns the antecedent is an opportunity to make a choice that earns a reward and is eager to continue working with me.

It is the consequence of behavior which drives the learning process, but many people tend to think the antecedent is what drives behavior. This is because dogs figure things out like little furry Thomas Edisons, experimenting with cause and effect. 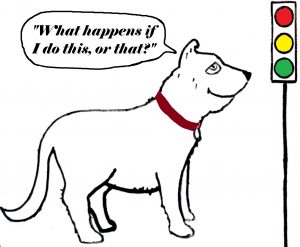 “What happens if I do this?” they say to themselves when they hear or see a training cue from a human. The consequence of their behavior choice determines whether they repeat that choice or abandon it.

This is where folks run into trouble when training dogs: they get stuck at the antecedent.

People use words all the time. It makes sense to us to give “commands” and we expect a dog to comprehend like an English major and perform a perfectly positioned sitting maneuver in turn.

“He did it before, so he must know what I am saying” is something I often hear. Folks also tend to repeat word cues relentlessly until they finally see the response they seek.

“Bowser, sit. Sit. Sit, Sit, SIT! Bowser looks up at his person hearing “Bowser, blah. Blah. Blah, Blah, BLAH!” He thinks to himself, “I dunno what my person wants from me so I guess I will just sit here and wait until I see a cue that I can understand.”

People can get stuck repeating the antecedent in belief that will drive behavior, but they are working at the wrong end.  Dogs learn by using their brain, not the other end. 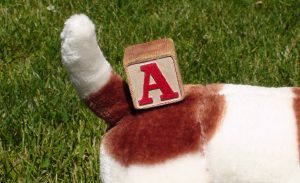 Don’t get stuck tossing antecedents at the dog!

Consider a human behavior we call driving a car. You are cruising along in the Big City and approach a busy intersection with traffic control signals. You see a green light and keep going forward. As you get closer the lights change to yellow and then red. Your car stops.

The color of the signal did not cease the forward motion of your vehicle; you chose to put your foot on the brake. You could have made another choice.

As a consequence of stopping you avoided collision with traffic on the intersecting street and that is a pretty positive reinforcement of your behavior.

A moment later the light you face turns green, but your car does not suddenly lurch ahead. As a defensive driver you look to your left and right before putting your foot on the gas pedal and see a giant red dump truck blasting through the red signals on the cross-street at 30 MPH…with a police car following. The truck driver saw a red light and chose to keep going forward.  The consequence is following.

Your choice to hesitate and look for hazards was richly rewarded and you will likely repeat the behavior choices you made at the next intersection, because of the consequences of those choices.

People and dogs develop behaviors according to the same learning theory. When we apply the principles of science based learning theory to teaching our dogs it becomes simple and fun. Work with your dog and have fun with it. The results will be mutually positive and reinforcing.