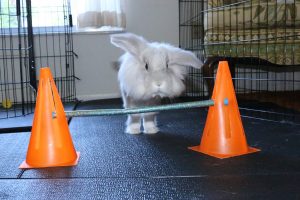 Tula takes on the agility course: Rabbits have the ability to quickly thread environmental events together in a pattern and have a highly perceptive understanding of what is going on © Emily Cassell

“So, where do you plan to hold your trick classes?” asked the interviewer from Do More with Your Dog! I hoped she was ready for the answer: “I don’t actually plan to hold in-person classes,” I explained. “The reason I am trying to get certified is so that I can create a Spark group for bunnies.”

They offer five tiers of titling for dogs, in the spirit of providing an avenue for those individuals who simply can’t enjoy the public sports ring: the dog-reactive, the fearful, the ones afraid of getting in a car, the ones with clinical behavior disorders, the ones whose parents simply can’t afford (or aren’t old enough) to do the “dog sports thing.”

The goal is, as the name of the organization implies, to encourage people to do more with their dogs!

I had discovered the fun in trick titling with my dog, Maddie, who was the first Labrador retriever to earn the Champion-level title. She literally lost her mind every time I began to rifle through trick props and set up for a training session.

Back then, I worked late hours, and this girl would stare at me to begin a training session at 2 a.m. Tricks are addictive.

Enter Hemingway, my first rabbit. Abused, neglected, and just a medical disaster of a creature, he looked and behaved like the survivor of a house fire. After spending countless hours, days, weeks, and months earning his trust, I didn’t believe I would ever actually teach him anything.

It was a few years later that I realized he had learned more than enough behaviors to qualify for a Novice Trick Dog title. So, I submitted. Later, Hemingway became the first bunny to earn an Intermediate title, and he began a movement that has had ripple effects for many bunnies and their humans.

Rabbits are prey animals. Prey animals don’t just try things. That’s the kind of recklessness that results in becoming the dinner of another animal. Domestication of rabbits hasn’t exactly focused on behavior as much as it has focused on meat production, fur quality, and science experiments.

Rabbits have as much reason not to trust us as they have not to trust a fox. Of course, that creates an issue once they arrive in our homes, where those of us who are lucky enough to share a home with them want nothing more than to be friends. Many rabbits learn to relax and trust their people.

I’ve been a professional trainer for nearly 15 years, and I’ve been working on specializing in rabbits for the last seven. Bunny husbandry (care and keeping) is rapidly evolving, as is pet husbandry in general, to have the bunnies be more of a part of the family.

Outdoor hutches that you visit once a day are a thing of the past, as much as leaving a dog tied to a tree in the yard is. However, people still often center their spoiling around providing things for their rabbits: toys, treats, special herbal blends, fancy beds, elaborate houses, even castles!

Those of us that train animals know that, while this is wonderful, what our pets really need is for us to do things with them.

My goal in spending nearly $400 to become certified in dog tricks so that I could officially title bunnies in tricks through a free Facebook course (known as a “Spark Team”) was literally so I could help people do more with their bunnies!

Tricks are frivolous to some, and some even consider “trick” to be a dirty word. I’m not sure why. My definition of a trick is a behavior that is fun. It may or may not have a utilitarian function or purpose. However, tricks take the pressure off the people because they are silly and not important.

Teach someone to train their rabbit to get on a scale, and the pressure is on. If they don’t get this behavior, then they can’t get weighed, then their health can’t be monitored, then they might get sick and we won’t know about it, or we’ll have to pick them up and stress them out and they’ll get mad and it might cause them to not eat and go into GI stasis and…whew. Spirally, right? It’s a lot for a new trainer who is a learner themselves!

Tricks have no pressure. Who cares if the rabbit doesn’t spin a circle? Does it matter if they won’t “sit pretty?” Nope. This allows the trainer to relax, making them a better trainer by default. Once they get a few tricks under their belt, then they can work on some more pressing behaviors.

Tricks have this great quality of allowing the trainer and the animal to have fun together. The communication required to build an odd behavior like “ring a bell” or “go through a tunnel” helps create a new dimension to the bunny/human relationship.

Suddenly, you aren’t just a provider for the animal. You are a team. You work on creating something together. The benefit of that is not lost on the bunny, and it’s wonderful to see and hear in the human. That’s why I love being a Bunny Spark Coach!

Rabbits get the opportunity to make a choice and get reinforced for it. They learn that operating on the environment is a safe thing to do.

It creates moments that are truly so connective between two species that you forget that you are different from them.

There have been countless times in my training sessions with my bunny, Tula, where we have been working on a behavior and she suddenly ad-libs and does something completely off the wall with a prop we’ve been using. It’s hysterical, I laugh with her and always reinforce it, and she usually runs back to me to be snuggled-she is happy.

Those moments are unlike anything else in the world. We are just two best friends having fun and enjoying our time together. I had to bring that to more people, and Do More with Your Dog! had created the format to do it: the Spark Team.

Spark Teams are private groups on Facebook led by certified trick dog instructors. The groups provide free tutorials for students and offer to witness and support them in getting their pet’s trick titles.

I started my TrickBun Spark Team a little over a year ago, and I surveyed my first class. A full 100% of them remarked that their relationship with their bunny had improved through teaching tricks. Many of them stated that their nervous bunny was now running up to the side of their pen when their human walked by, or that they began to sit in the area where their training props where.

They binkied (a rabbit expression of pure joy, where they hop into the air and kick out their legs) more in general, but especially when the training session was about to begin. This is exactly what I’d experienced with my rabbits, and I was thrilled to hear that others were experiencing these amazing benefits as well.

All of my students, who put the time and effort into teaching their buns, however, have no doubt about the intelligence of their learners. They will tell you that they are already well aware of how smart they are. This brings me immense joy, because I know that they are spreading the word about how smart bunnies are to those who don’t know them like we do.

Rabbits are highly sensitive, smart, and sensible. They quickly thread environmental events together in a pattern and have a highly perceptive understanding of what is going on. Teaching them is not unlike teaching puppy class, where you watch the puppies catch onto the behavior more quickly than their humans realize they are learning something.

Rabbits respond quickly to the environment, which makes them perfectly suited to learning patterns and chaining behaviors, which often means that the rabbit has learned the behavior before the trainer even realizes it.

Our team has rapidly grown, and the species that we are hosting has grown with it!

Guinea pigs, goats, cats, and even sheep have shown up in our group, working on their trick titles.

All of these “untrainable” animals are learning to do things like target, spin circles, and jump hoops.

Their humans are building relationships that are trusting, loving, and fun. As the cliché goes, it’s not the destination, it’s the journey that matters.

In TrickBun, our destination is a trick title. Our journey is the relationship. Tricks are our roadmap. Trick bunnies are happy bunnies, and trick trainers are happy humans! Pet guardianship is no longer about providing, it’s about doing.

For too long, training an animal other than a dog or horse has been associated with “having too much time on your hands.”

My goal for the bunny world is for bunny training to become as commonplace as dog training, because the bunnies are smart, they enjoy it, and mental stimulation is just as important as veterinary care and a proper diet.

So, if you are a rabbit guardian, grab a clicker, and Do More with Your Bun! 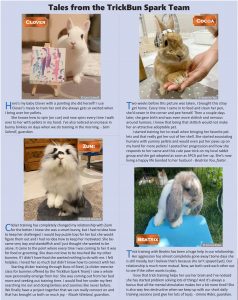 This article was first published in BARKS from the Guild, January 2021, pp.22-25. Read the full article Trick Bunnies.

About the Author
Emily Cassell is a zookeeper and professional pet trainer based in Tampa, Florida. She began her career in 2010 with dogs before expanding to fish, guinea pigs, cats, rabbits, and other pets while operating her own training business, Phins with Fur Animal Training. While pursuing a degree in Animal Science at the University of Florida, she worked with Class Act for Dogs in Gainesville before returning to Tampa to work at Courteous Canine, Inc. After completing internships with Tampa’s Lowry Park Zoo and Clearwater Marine Aquarium working with manatees, dolphins, otters, and birds, she landed a job as a full-time keeper and trainer at one of world’s most respected zoological institutions, located in Tampa. Her primary responsibilities now include orangutans, tigers, gibbons, bats and various other species.

Despite her career with much larger animals, she has always maintained an interest in small pets. She has presented multiple webinars and written various articles on small pet care and behavior. In addition, she operates Small Animal Resources, a service providing free help for those needing assistance with small mammal care as well as private behavior consultation for small pets.