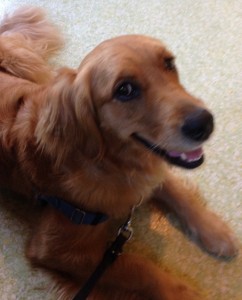 It’s been a couple of years since Gregory Berns published his research that uses MRIs to show that dogs love their humans. Now, British and Brazilian researchers have published a paper showing that dogs recognize our emotions as well.
Sure, dog lovers have many stories about dogs showing empathy or reacting to the anger, happiness, sadness, or other emotions in our tone of voice. But this study is the first to show that dogs actually make a connection between our facial expressions and the emotional qualities of our speech.

The researchers say that theirs is the first study to show that members of one species can recognize emotions and process multimodal cues (in this case, visual and auditory) of another species. It makes sense, they point out, that dogs would develop this skill. Much rides on their ability to read (and manipulate) us.
The study was fairly simple. And the test sample was small: 17 dogs. A man and a woman and a male dog and a female dog were used for the visual and auditory signals. A photo of each with a happy, friendly expression and one with a menacing, aggressive expression were used. The happy and threatening photos of the same person or dog were then shown to the test subjects.

For each trial, the photos were shown and a sound was played. The vocalizations had either a positive, happy “valence” (intrinsic attractiveness) or negative valence (intrinsic aversiveness). The humans’ vocalizations used an unfamiliar language; the dog vocalizations were happy, playful barks or angry, aggressive barks.
All the dogs were tested in all the possible combinations, as well as neutral (same photo pairs and a neutral sound).

The dogs overwhelmingly looked at the photo that matched the valence of the sound, showing that they could match the underlying emotion of the sound with the underlying emotion of the photo. They looked longer at the dog photos than at the human photos. Even so, the “results show that domestic dogs can obtain dog and human emotional information from both auditory and visual inputs, and integrate them into a coherent perception of emotion,” says the paper. It goes on: “Therefore, it is likely that dogs possess at least the mental prototypes for emotional categorization (positive versus negative affect) and can recognize the emotional content of these expressions.”

The dogs were not trained to do this and were not familiar with the dog and human models for the photos or vocalizations. This means that they were not simply responding to learned or familiar sounds / images.

While the sample size is small, it is nonetheless significant. Just as small studies (Chaser and Rico) showed that dogs can learn some aspects of language, this study shows that dogs can intuit and categorize emotions.

Once we know that an ability exists in dogs, whether learning to understand sentences, master concepts like size or color, or categorizing and generalizing emotional representations, it forces us to relate to them differently. We have to figure out ways to let them develop and use their abilities. This skill also explains why dogs are such great friends and so comforting to have around: They really do understand us!

The study, “Dogs recognize dog and human emotions,” was published in January 13, 2016, by the UK journal Biology Letters. Read it here.