It was an electric moment.

After having Oona for seven weeks, something clicked. Our Irish wolfhound puppy realized that the sounds I was making with my mouth meant something to her. She looked me directly and unflinchingly in the eye and — wham —a gap had been spanned. Clear communication was suddenly happening. A lifelong connection had begun. 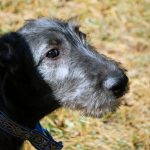 Oona, a four-month-old Irish wolfhound puppy, learns to focus on her owner by learning “watch.”

After that subtle but memorable moment,  our rowdy puppy was changed. She was interacting with my wife and I with more purpose in a more mature way. She was showing the first signs of developing the dog’s incredible talent for learning a foreign language, humanspeak. She was listening to us. It was a heady time for the owners of a new puppy prone to ripping around the yard in a toothy blur and leaping on furniture like it was a juicy side of beef. Now she was trainable. Moreover, we’d begun building a rapport. With a companion dog, that’s equally as important as knowing and responding to a handful of verbal cues. Talk to your dog to enhance your time with them.

It seems self-evident to say that dogs don’t naturally speak the Queen’s English. Yet many of us will sit across the room while Fido is eating the couch and say, “Fido! If you don’t stop doing that right now,  you’re going to be in BIG trouble, buster.” Unless we’ve worked on his word retention, Fido caught about none of that, except that we’re a little prickly about the couch. He figures it’s because we want our turn, so Fido goes on gnawing, smug because he got there first. Mostly, this is a case of talking at your dog, not to them.

If our words are just so many sounds to them, why do we bother talking to our dogs at all? Because it’s how we communicate. We don’t adapt nearly as easily as dogs do. Dogs — when they’re coached to do so —  have a remarkable knack for deciphering and retaining human language. When they speak to us in dogtalk… at best we usually just muddle along.

Learning the word “watch” was the tipping point with Oona. I forget from dog to dog how important it is to begin training early. Because training is a conversation. Dialogue leads to understanding and camaraderie between species. Capturing Oona’s attention was the hook from which all the other words we taught her hung. We couldn’t get her to “sit” worth a flip while she was fixed on stalking the cat or chasing moths. ”Watch” began by luring her with a piece of cheese held between my eyes. But eventually she responded to the word alone and looked me cheerfully in the eye. I had her trust by then… and she knew I had cheese . She’d realized I was the Bringer of All Good Things. Now she suddenly saw that I was communicating with her and more good things would come… if only she could unlock the meaning of the sounds. She was motivated.

And that’s the thing. We communicate with our dogs in several ways — through our body language and our gestures, through our daily routines, even with the expressions on our faces. Dogs study our signals. Many of them are unintentional, but language we can control. But how do we do it purposefully with a member our of household who speaks only dog?  With consistency and patience, the same way we teach another person a new language. And with a big dose of mutual respect. In this case, I used what little dogspeak I knew and I watched Oona closely from day one. When she alerted to another dog, I told her, “dog.” When she fixed on one barking, I said, “bark.” Over and over, every time. When her eyes snapped towards a passing car, I said, “car.” I also used that word when we were at the door of the big metal box on rubber wheels that took her fun places. Same object, different context. Shortly, when we approached the door I could say, “car,” and she sat next to the door to be lifted up to the car seat. Vocabulary building had begun.

Rico, the border collie, is famous in research circles for his language comprehension. In 2004, he demonstrated to animal psychologists at the Max Planck Institute for Evolutionary Anthropology in Leipzig that he had a working understanding of more than 200 human words. They named an object. Rico went into another room and fetched it. He demonstrated simple logic. Moreoever, he showed he could use “fast mapping” that humans use in correctly responding to a new word the first time he heard it. Reseachers say Rico showing the language comprehension of a three-year-old child.

In 2010, Chaser, another border collie, showed he had a working comprehension of more than 1,000 words and was able to recognize objects by the groups they belonged in. Rico and Chaser are border collies, dogs specifically bred to respond to human vocal commands — along with whistles — to herd sheep. They have a genetic advantage, but most dogs have untapped linguistic abilities.

Dogs talk to one another in an elaborate series of yips, woofs, whines, yelps, snarls and mutters — a primitive but effective language that shows they have the brain structure for vocal communication. Some researchers go so far as to say that with more sophisticated vocal cords and slight shifts in the brain, dogs could speak the human language. I don’t expect to be taking Oona to the local Toastmasters meetings any time soon, but I teach her words constantly. She’s an adolescent, she needs encouragement and grounding. She only knows a few of my words so far — ball, water, food, outside — but she can read my tone. I don’t like to surprise my dogs. Rapport is my goal. 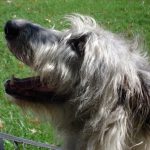 Finn keys in on the words “pet food store” and “park”.

In outings with my adult wolfhound, Finn, shortly after we leave the house I see he’s excited and anxious about our destination. It might be the park but it could be the vet’s. I take away the suspense by saying, “We’re going to the pet food store and you can come inside.”  He smiles and relaxes. Finn likes sniffing the treats and meeting other dogs. I add, “Then, we’re going to the park.” He grins bigger. It’s going to be a fun trip after all.  Oona knows the names of none of these destinations yet, but she relaxes when I speak reassuringly to her.

I have no empirical proof of this but I’m convinced I once shared a joke with another of my hounds, Cuchulain.  We were playing the naming game. A gust of wind howled past the window so I said, “wind,” and made a whistling, moaning sound with my mouth. Cuchulain’s head whipped toward the window. Then his eyes clicked sideways to me and slowly, slyly, he turned back. With self-awareness dancing in his eyes, he grinned. I expected him to slap his forehead and say, “du-uh.” Whenever I said “wind” after that, he looked at the tree leaves blowing, but he also smiled. We both did. 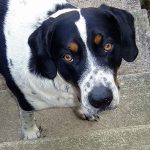 Talk to your dog regularly to strengthen your rapport.

Talk to your dog. Be consistent. You might be surprised to see what sticks. Word comprehension is only one tool in a trainer’s kit. Hand signals, body posture, tone of voice and the allure of treats all dovetail when used by a skilled trainer. And a rich, shared vocabulary opens up the human world for your dog, the world you share together.