We Are All Individuals, BSL or Not

One of the members of my family happens to be a gorgeous Staffordshire bull terrier. Where we live (Spain) he is categorized as a “potentially dangerous dog.” Strange wording in itself as surely all dogs are “potentially dangerous” if treated in the wrong way? This BSL affects him and all of us in many ways, none of which happen to be good. Staffordshire bull terriers are not, however, affected by BSL in the UK, unless the authorities decide that they are “pit bull type” (don’t get me started on that one!). How can a breed of dog be dangerous in one country and not another? Are Staffies born in Spain somehow more dangerous than those born in the UK? But wait, it gets even more ludicrous.

The list of potentially dangerous dogs in Spain includes the following breeds: American pit bull terrier; Staffordshire bull terrier; American Staffordshire terrier; Rottweiler; Dogo Argentino; Fila Brasileiro; Tosa Inu; Akita Inu. Crazy enough in itself, but now here is the absolutely unbelievable bit… Different states/regions also include other breeds. For example, some areas include the Doberman, others all mastiff types and others the German shepherd. If you live in my region then the Doberman is affected by BSL but if you live 30 minutes away you’ll be safe as Dobermans aren’t on the list. My beautiful German Shepherd girl Tessa isn’t considered “dangerous” where I live but we had better not relocate to a different region as, if we were to do so, she would then become “dangerous.” Legislation also includes any crosses of the above breeds and any dogs with the “right measurements” – width of chest, head, mouth; length of leg; weight; short hair…. Oh wow, I guess I’m okay on the last point, with my long blond hair. I’d better not cut it just in case. Watch out though if you are a dog with short hair. Thank goodness Tessa is a long-haired German Shepherd and not a short-haired one! The same ludicrous situation is apparent all across the United States where, in some areas “pit bull type” dogs are legislated against and in others they aren’t.

Let’s go back a minute to my long blond hair and the fact that, based on the “logic” of BSL, I now need to be incarcerated just in case I act aggressively. So, all people with long blond hair are exactly the same, aren’t they? We all act in exactly the same way, have the same characters/personalities, the same thoughts and desires (to act aggressively)… We all definitely need to be “registered,” muzzled, kept on a short leash, locked up or maybe even given a lethal injection. The general public would be much safer then, wouldn’t they?

Of course we aren’t all the same! In fact, how ridiculous does it sound when you explain BSL in this way?

Just as every person is an individual so is every dog. They have so many different character traits. They are also affected by the way in which they are cared for. Mistreat any person or animal enough and eventually they will either give up, surrender, shut down… or they will try and protect themselves, fight back or even just lash out at the first person/animal they see. 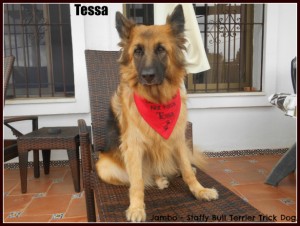 Tessa and Jambo are definitely both individuals. While out walking last night, I was thinking about how different they are in many ways. Tessa is extremely loving and gentle but doesn’t much like the company of strangers. She really isn’t comfortable with dogs or people that she doesn’t know getting in her personal space. She likes to have fun but anyone who doesn’t know her would probably say she is a bit “stand-off-ish.” She’s just more at ease with those she knows. She loves to go for rides in the car and long walks in the countryside. She’s definitely not the life and soul of the party. When we are out walking she really enjoys “reading the newspaper,” so much so that she has to read every single article and comment on it. She likes to walk slowly and take everything in. If she sees another dog or person in the distance then she prefers to go the other way and avoid them. She’s quite elegant and ladylike in most ways but get too close and she might just decide to tell you to “get lost.” 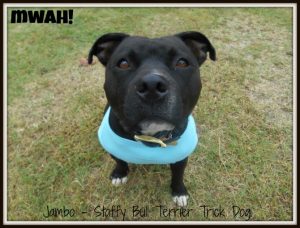 Jambo, our Staffordshire bull terrier, is the total opposite of Tessa. He’s the life and soul of the party and wants to say hello to absolutely every person or dog he meets. He gets so excited even just catching a glimpse of someone in the distance. If they’re prepared to say hello then they had better watch out. He definitely doesn’t care about “personal space.” I suppose you could say that he is very “touchy, feely.” He loves to hug and kiss everyone. Like Tessa, he loves to go for long car rides and walks but that’s where the similarity ends. He has no time for “reading the paper.” He’ll quickly check out the most interesting articles and very occasionally “comment” on them but then quickly has to move on to see what’s coming around the next corner. Maybe there is something or someone up ahead. He’s what I’d call a “full-on, loving and mischievous little tomboy”. He loves playing football, chasing around, rolling in the dirt and giving as many kisses as possible.

Is Jambo more “dangerous” because he is a Staffordshire bull terrier? I’ll let you decide!