We Can Argue over TV. Our Dogs Have to Put Up with It 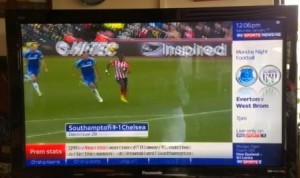 To take this photograph I have been searching for a football match on TV – a first!

Most of my PPG blogs arise from the stories of dogs I have been working with that have got me thinking.

Many of the people I visit have their TVs on all the time, whether or not they are watching anything. I myself live with someone whose hearing is not as good as my own and who has different tastes to myself. I find it impossible to concentrate on what I am doing with the noise of football crowds yelling beside me or a background of shouting and shooting from an old movie (I accept that many people would feel the same with opera or heavy metal). Unwanted TV, or any TV too loud (apart from Freddie Mercury and rock group Queen!) makes me irritable and can give me a headache.

How then must it be for dogs who have to put up with the constant noise in their much more sensitive ears – noise that can be of little or no interest to them?

In addition, to quote Samsung: ‘All electronics will create a slight hum, buzz, or whistle during operation or standby. Depending on how pitch sensitive your ears are you may hear this noise.’

Food for thought? In order to de-stress our dogs we naturally think of what we can ADD. Add a plug-in to the room, add Zylkene or Valerian to the dogs diet, put on a Thundershirt, add TV or radio when we are out and so on. Should we not also be considering what we could be REMOVING? Turning off TV, turning electronics off instead of leaving on stand-by, removing the batteries from automatic fresh air dispensers, removing chemicals and perfumed cleaning products… there must be many things.

Turning the power off at the mains for half an hour may be an interesting experiment if we have a highly stressed dog (okay, we will need to re-set time clocks, but it would be worth the effort surely).

Freddie when TV had just been turned back on

‘I sat down at the start of the consultation and asked the people to turn off their TV (as I often have to). Even without sound and just flickering I find it distracting.

Freddie was friendly but restless whilst doing some quite determined nudging and nosing for attention before sitting and scratching and chewing himself. The vet wants to investigate further the raw bits on his stomach and leg, but for now he is on anti-histamine tablets.

After about half an hour he settled down, to stretch out peacefully on the floor.

The daughter, on her way out, popped her head round the door and remarked how calm Freddie was. This is very unusual in the evening.

The five-year-old Border Collie was picked up as a stray in Ireland three years ago and thanks to the care of his loving owners he has fitted into their life really well. He is friendly and gentle, gets on really well with their two cats and is great with other dogs.

Freddie’s two problems are that he is very reactive to any animals on TV and he is scared of bangs. He hates the wind because it makes things clatter about. On walks he frequently bolts on hearing a gunshot or bird scarer. He is a shaking mess with fireworks. Indoors he may suddenly begin to spook at something he has heard outside, inaudible to the humans. He is constantly ill at ease.

After a while, in order that I could see how he was with animals on TV, I asked them to turn it back on again. Although there were no animals yet, within a couple of minutes Freddie was no longer lying stretched out and relaxed. He was becoming increasingly agitated, pacing and beginning to chew himself.

Then he looked at the TV, saw an animal, crouched, growled and launched himself at it.

We turned the TV off again.

After only about five minutes of the television having been on again, it took another 20 minutes before Freddie was once more lying relaxed on the floor. The couple were amazed. It was such a graphic demonstration of the amount of stress TV was causing their dog, and like many people they have it on constantly when they are at home. Some even leave it on as ‘company’ for their dog when they are out.

We had tried turning the volume off, but by then he had seen the animal. I believe that the mere sound of the TV tells him that at any moment a strange one-dimensional beast may invade his room. With the TV on he feels unsafe in his own home.

What can they do? They understandably don’t feel that never again watching TV is an option and, besides, that would never address the problem. He will be desensitized carefully at a level he can handle, and counter-conditioned to accepting and even enjoying it.  He will also be taught a ‘self-rescue’ strategy whereby he can automatically take himself somewhere ‘safe’ when he feels any unease.

I strongly suspect that the raw skin condition due to his constant chewing and scratching will also resolve itself as his stress levels reduce. With Freddie in a generally calmer state, they should more easily be able to work on the bang problem when they are out.

Please go to my website for many more stories of dogs I have worked with. To learn more about working with reactive dogs and so much more, head to Tampa, Florida on November 11-13, 2015 for the Pet Professional Guild’s inaugural educational convention, the Force-Free Summit – Reaching for a Higher Standard.