I was recently looking for photos of dogs displaying “aggressive behavior” for an article in BARKS from the Guild, the quarterly publication produced by the Pet Professional Guild. There were plenty of them in the image library. Pictures of dogs showing their teeth that is. The only problem was, not a single one of the dogs was actually being aggressive even though they had been tagged as such. All I could find were photos of dogs showing their teeth with soft lips and facial expressions, and pictures of dogs playing, showing no signs of aggression at all.

It led me to ponder, yet again, about how misunderstood our canine companions are, often being labeled as aggressive when in fact they are nothing of the sort. Aggression can be such a fleeting behavior, specific to a moment or context. It almost always comes with signals and warnings – but these are so often missed or misunderstood.

But back to the image library… Granted, it is very difficult to get a picture of a dog being aggressive. The last thing you’re going to do if a dog is lunging aggressively at another person or dog or, even worse, engaged in full on combat with another dog, is stop to get your camera out.

This is where my very own Daisy comes in handy. As detailed in my previous blog, she is something of a hoarder and resource guarder, courtesy, in part at least, of who-knows-how-long she spent living on the streets and fending for herself. Daisy’s signs are a mini-freeze, a growl or two, an increasingly curled top lip and then, finally – if you don’t respect any of those – a whip round of the head to defend her resource and (no longer, but certainly in the early days) a quick snap at your leg/hand. We have been successful in minimizing her resource guarding and it has definitely decreased in its intensity. We also know when she is about to do it and are able to get her into a sit/look at me and reward with a yummy treat before she really gets going. 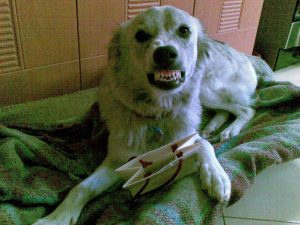 Daisy is giving so many signs here, and would have been doing so both covertly and overtly in the moments leading up to this. It is up to us to observe and understand the signals our dogs give us

This picture is the only one I have of her seriously guarding a resource, in this case a paper bag which had had food inside. It was taken during the first few weeks after we had found her wandering the streets. Here, she is in her bed – a highly valued resource, which doesn’t help of course. But more to the point, her lips are curled, teeth are on full display, she is growling, staring and freezing. Anyone who put their hand in there to take the bag would, quite frankly, be rather foolish. Our goal with our dogs should be to always set them up for success. If Daisy snaps or bites, she fails (and, by not understanding the communications she is so obviously giving us, so do we). We do not want to reinforce the fact that aggressive behavior gets her what she wants (i.e. us to go away and leave her to her precious resource). We do not want her to learn that snapping or biting is the “go-to” behavior. Absolutely not. So instead we would get her out of it by interrupting the behavior and redirecting it onto something incompatible (a sit and look at me) and more attractive (for her – a nice treat). This way we keep the emotional intensity low and reduce the risk of anyone getting hurt. SUCCESS all round.

As an interesting aside, our other dogs totally respect her signals when she is guarding something. They avoid eye contact and slowly move away. There has never been a fight over food, toys or anything else. If only humans were so perceptive when it comes to reading their dogs! 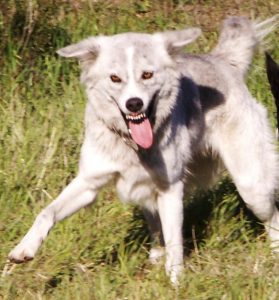 It’s important to note in the picture above that Daisy’s ears are back, flattened against her head and her facial muscles are stiff, her nose is wrinkled and her stare is hard – all signs of an aggressive mood state. Contrast that then, with this picture of her playing (left), also showing her teeth but not being aggressive in the slightest. This is where the misunderstanding seems to lie. Note the soft facial expression, the floppy ears, the soft eyes and nose… At the risk of sounding anthropomorphic, she looks “happy”.

In this entire series of photos of these dogs playing (below), there are play bows (a meta signal amongst dogs that everything ensuing is done in play and not aggression), lots of teeth, soft faces and an agreement at the end, when it is all over, to stand still and take a break to calm things down before the next round. 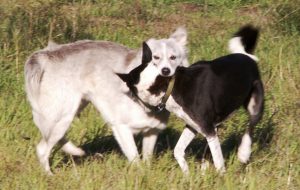 Daisy may look like she’s biting Louis (right) but she’s not. Note the soft face. Note that Louis is unfazed – which would not be the case if she were really biting 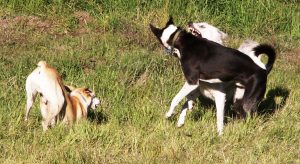 Bertie (left) is demonstrating the play bow. All the dogs know this is play and not an aggressive situation, teeth notwithstanding 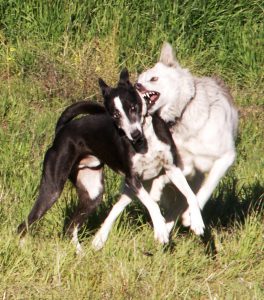 Still not biting… and Louis (left) is coping just fine. If this were an aggressive display, Louis’ response would be different 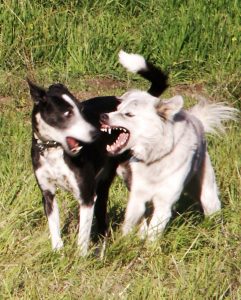 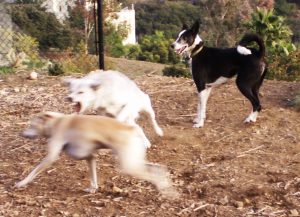 This is from a different play session but worth including as it might look like Daisy is carrying out a full-blown attack. Does Louis (right) look worried? No. Does Bertie, the recipient of the “attack”? No. Her lips and face are soft. They all know this is a game. They were moving so fast they are blurred in the shot! 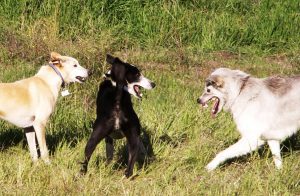 Things are calming down… 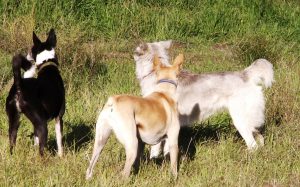 They all know it’s time for a break. This helps diffuse any residual tension and dogs will often “shake it all off” at this point. No harm done. They are masters of communication

When you look at a series of pictures like this, it all seems rather obvious. And yet the reality says the opposite. Dogs are constantly misunderstood and often end up paying the ultimate price for it. Context is everything. Understanding triggers, signals, body language and facial expression is absolutely essential. Perhaps even more importantly, dog owners must realize that aggressive behavior is completely normal in the canine world – and the human world for that matter. Understanding that it is context-specific, that it does not by any means mark a dog as “an aggressive dog” and – this is fundamental – not punishing it, is key in enhancing our relationships with our dogs.