What New Pet Owners May Not Know 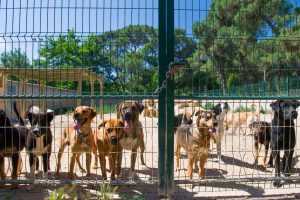 I recently came across an article in which the author spoke about why people give up exotic birds…and it got me thinking.

It seems to me that with dog or cat relinquishment, the reasons boil down to two main issues: (1) lack of understanding and (2) lack of commitment. Let me explain.

Often people will go out and purchase or even rescue a pet without much prior thought or consideration. Someone visits a pet store and sees something “cute” or “cuddly” and it sounds like fun. People do this all the time with other items. We pick up that candy bar or magazine while we wait in line at the grocery store. We treat ourselves to something we cannot afford – like the newest electronic gadget – and end up blowing our budget. We buy a dress because we like the color only to find that it doesn’t look as flattering as it did in the store. We buy those adorable shoes but they sit in the closet collecting dust because we really have nowhere to wear them.

It’s one thing to toss aside those shoes, return the dress, or throw an old magazine in the trash. It is quite another thing to adopt or purchase a living, breathing creature that needs proper and consistent care and then toss it aside. Folks with a conscience will find the animal a suitable home but some may neglect or abuse the animal, turn it loose, or worse. Impulse adoptions and purchases of pets are dangerous for the animal. Furthermore, it is the lack of forethought and understanding that makes an owner’s expectations of their pet unrealistic. 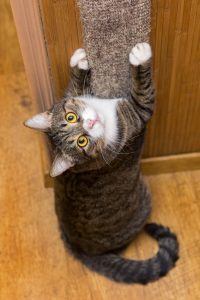 It is usually straightforward to train a cat to use a scratch post yet scratching the furniture is a commonly reported problem. Graphic © Can Stock Photo

An owner that adopts or purchases an animal on impulse often does not think ahead, may not understand the needs of the animal, and may generally not know what to expect of the animal. Often folks who have never owned a cat or dog may have no idea what normal behavior is for the animal. Why does my dog bark so much? Why is the cat scratching my furniture? Do puppies always chew everything in sight? Does every cat jump onto the kitchen counters? My dog seems to always have accidents in that same spot. Are all of these normal behaviors? The short answer is YES…though the behaviors can be altered to make a more livable situation. We train our dogs and cats to do their business outside or in a litter box. We teach cats that a scratching post is more acceptable than the furniture and we teach dogs to chew bones and toys instead of shoes. We can even teach cats where they may and may not climb. But these behaviors must be taught. Most animals do not come pre-trained and pre-taught. Some even come with baggage.

One of those “baggage” items is that of sexual behavior. Folks that have never dealt with a hormonal pet may not recognize some of the signs and will become frustrated when their cat displays its rear end in their face or when their dog humps their leg. Pet owners need to be educated on the importance of spaying and neutering their pets. These behaviors (and the frustrations that arise as a result of them) are almost completely avoidable. What a small price to pay for a lifetime of happiness for pet and owner! 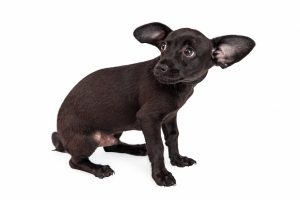 Owners relinquish their pets for many reasons, including expense, moving house, and undesirable behavior. Graphic © Can Stock Photo

Veterinary care and the animal’s lifespan are also big considerations when committing to life with a pet. Veterinary care begins with puppy immunizations and continues throughout life. Sick visits and checkups can add up quickly and an owner must be prepared for it all. I once rescued a black lab who was quite old when he came to me. He stole my heart. Little did I know that within a short time he would display symptoms of bloat and would be rushed to the emergency room. His bill? In excess of $2,000. I do not say this lightly – we did not have the money at the time. Many would have put him down right then and there, but he deserved a chance and he fought through all of that and lived a number of happy, healthy years beyond that. And I might add that I would do it all over again for him. But many would not. Many will relinquish a pet for far less in veterinary costs. They may not be understanding of the costs involved when they take on the pet, but they are also not willing to commit to the pet – either financially (in veterinary care, healthy food, etc.), in time and training, or even for the pet’s lifespan.

The lifespan of a pet can vary, but an owner may not be prepared for what is ahead. Puppies and kittens have a full life ahead. Depending on breed and health, a dog could live upwards to 18 years. Some have lived longer, some shorter. A cat may have lived out his lifespan at 12 to 15 years. Some, again, live well into their late teens and 20s. Other cats that spend much time out of doors live a shorter life. But human life changes over the course of those years as well. People marry, kids grow up, jobs change, moving occurs. But that pet is still there and still remains faithful. Will the owner be able to make those changes with the pet’s best interest at heart? Unfortunately many don’t. Nothing breaks my heart more than to see an elderly dog being dumped because the owner moved and “couldn’t take her with them.”

Some of us deal with pets and owners on a daily basis – we are in the business of dealing with pets and owners. Others are simply reading this because of a love for animals. No matter who you are or what you do, you can play a role in educating people regarding pet ownership. Do you know someone that is considering adoption or a pet purchase? Give them educational materials on that type of animal. Teach your children what behaviors to expect from animals. You don’t have to be a pet professional to make a difference. Write a letter to your local newspaper editor. Start a blog. Talk to a neighbor who is having some trouble with their pet. Volunteer at a local rescue organization. You may be surprised how far a little knowledge can go in changing the life of a pet!