What the Nose Knows

A whiff of cinnamon can whisk you back to that day years ago when you baked cookies with grandma on a rainy Saturday. You stroll into a florist to buy flowers for a party and the smell of the flowers floods you with memories of your father’s funeral. A single scent can ruin your day, energize you, give you hope and affect your decisions  — it’s the power of scent and memory.

Our sense of smell has come under intense scrutiny by scientists and marketeers in recent years because in subtle and not yet fully understood ways, odors affect appetite, libido, and mood. They can pull a patient out of the grip of dementia, influence who you keep as friends and steer you safe from danger. Research is making it more and more clear that our sense of smell provides a subtext that enriches our lives.

Now consider this: A dog’s sense of smell is up to 100,000 times greater than ours. We can smell a rotten apple under our nose. A dog can pick one out from two million barrels of apples. 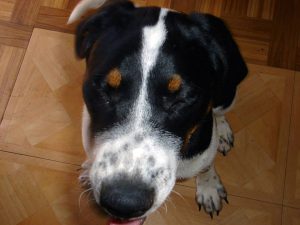 Who needs to search the universe for alien life forms? That dog at your side is literally living in another world from us, an unimaginably rich and intoxicating dimension roiling with messages, alarms and insights. Which might explain why Fido is clawing the ground to smell that tree while you’re on a schedule and really just want to get on with your walk. To you, it’s just a tree. Another dog probably urinated there. So what? There are a lot of trees on the route.To Fido, it’s a veritable library of data. It’s a mystery novel, a love story, an action tale and the Sunday New York Times. Fido knows all the dogs who stopped at that tree for days. He reads their age, sex, health and mood, an impressive feat all on its own. But then the data stream flows through the frontal lobe of his brain and filters to sectors linked to memory and emotions. When Fido lingers rapturously over a scent like a wine enthusiast savoring a particularly fine vintage, his mind is swirling with memories and powerful emotional associations. He’s on a magical mystery tour. You’re just hoping to beat the five o’clock traffic. Maybe it’s time to rethink your walks with Fido?When my dog Finn reached maturity, he took a philosophical turn. As a juvenile wolfhound, he couldn’t pull me through the bushes fast enough to get to the next exciting new thing. Then, suddenly one day, he began to linger. He thrust his snout in the grass. He looked like he was about to sneeze. He licked the spot. And loitered some more. From that day on, our walks took longer and longer as he mapped out his world with his nose. Only treats of the highest value would persuade him to budge.I remembered Cuchulain, my first sighthound, swift dogs bred to chase down game, hounds whose hunt drive clicks into high gear when triggered by movement. Or, so the story goes. Once at a festival, Cuchulain was so fixed on following a scent trail through the grass that he strolled past an elephant without raising his snout. A 15,000-pound mammal creaked and lumbered by. I was slightly awestruck. Cuchulain was oblivious. Whatever he was smelling in the grass was more irresistible.

So, my walks with Finn have turned into stop-and-go tours. As he’s gotten older, it’s been more stop than go. But I’ve set aside extra time and as long as he gets in his exercise while he’s satisfying his nose needs, it’s okay. I’ve turned our walks over to Finn’s nose. Because it’s that important to him. Walks are his mental health breaks, his strolls down memory lane, his doing what he was made to do. I used to think that was run. Then I learned about the marvel that is a dog’s nose.

The human nose has six million olfactory sensors. The dog’s nose has 300 million. The dog’s nose has two separate channels through which air passes as he inhales and exhales. One is dedicated just to scents. About 12% of the air a dog inhales is directed through the scent channel. A dog can wiggle his nostrils in different directions, which helps him track which way the scent source went.

At the base of a dog’s nasal cavity is a bonus olfactory sensor, the vomeronasal organ, also called Jacobson’s organ, which detects chemicals that are odorless to us, including pheromones and hormones. Among other functions, it’s the organ that warns service dogs that someone is about to have an epileptic seizure. Think your dog is psychic because he knows when you’re stressed or fearful? Yes, he’s studying your body language, but his vomeronasal organ is also reading your pheromones. You can’t hide your feelings from your dog.

How important is the world of scents to dogs? Consider that a third of their brain is dedicated to the sense of smell, an area that is 40 times greater than humans, proportionally. A dog’s brain is a powerful computer dedicated to filing new scents, storing old ones and analyzing and cross-referencing data streaming through his nose. When he indulges his nose, he’s accessing a vast database — scent memories and all the rich, personal emotional associations linked to them. And, he may be tracking down a stray french fry, which he also finds pretty invigorating.

So, let your dog linger and sniff.  He finds it vastly stimulating. In the case of older dogs like Finn, it’s helping stave off mental degeneration, too. We do brain puzzles to stay mentally alert. Dog’s sniff. When they do, they’re navigating through worlds we can’t dream of.