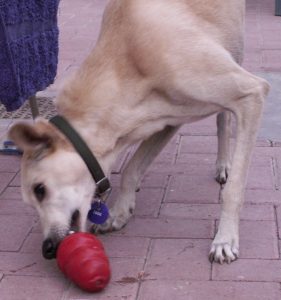 How many of us have heard about food-toy failures from our friends and clients? “I tried the Kong with my puppy, but she didn’t like it,” or, “My dog is not smart enough for those puzzle toys!”

There is an ever-increasing variety of food toys for dogs and other animals on the market. There are toys of differing complexity. There are toys that demand problem solving and toys that necessitate complex motor skills. Dog owners are fortunate to have more and more choices to enrich their dogs’ lives.

Yet many of these toys are gathering dust, have been passed off at garage sales or have even been thrown out because the owners did not realize that dogs need to learn how to interact with them successfully—or because the toys had features that made them frustrating or scary to the dog.

Behaviors: Building Skills
The most common problem with food toys is that the dog lacks the skills to get to the food and the owner does not understand how to teach him.

Many food toys come with no instructions for the naive dog. For instance, toys that have a cavity that can be filled with food, such as Kongs, are assumed by most consumers to be easy and fun for dogs to use. The marketing materials lead them to believe this, showing dogs chewing, licking and batting around full toys to dislodge the food and even playing with empty ones.

However, if the toy is initially presented at its most difficult level, which is often what is shown in advertising, demo videos and discussion groups, many dogs cannot be successful.

The “recipes” found for these toys on the internet are often elaborate and challenging, with fillings solidified by freezing or melted cheese. Special biscuits can be purchased for some toys that can’t be shaken or rolled out and require the dog to crush the whole toy or saturate the food by licking before it will get to eat anything.

When an owner presents a challenge like this to a new puppy or even an inexperienced, well-fed or timid adult dog, the animal will often sniff at the toy, perhaps poke it with its nose or lick it for a while, then give up. Then the pet owner may say, “Well, my dog doesn’t like food toys,” and also give up.

Let’s look at what behaviors a dog needs to succeed at using one of these toys. They might include licking, chewing, pushing with the nose, picking up, carrying, dropping, shaking, batting with the paws or securing the toy with the paws while performing some of the other behaviors. These are normal dog behaviors but that does not mean every dog will know how to use them in a given situation. With some more difficult toys, they must be performed in a certain order.

As when training any behavior, owners need to start dogs at a level at which they can easily succeed and provide extremely attractive consequences. The dog should be able clearly to see, hear, and/or smell the food and get some of it right away. Cavity toys can be filled loosely with small, high-value treats, so that any movement by the dog is likely to immediately produce something the dog loves. The opening can be smeared with peanut butter or meat puree to encourage licking. The difficulty can then be increased slowly as the dog refines the physical skills to extract the food.

Consequences: Is the Toy Punishing the Dog?
There can be problems in this area as well, when the consequence of the behavior is either not reinforcing or, worse, scary. A dog who is used to getting kibble for free in a bowl may not be motivated to dig slightly wetted and frozen kibble out of a toy. He may have the appropriate behavioral skills but the consequence does not merit the effort. This problem is relatively easy to prevent or fix: add some higher value morsels and start off easier, as described above.

One problem not so easy to remedy is when an unpleasant consequence comes instead of, or along with the food. A hard plastic toy may bang against a wall or a toy with electronics may beep or move in a startling way. If one of these stimuli precedes the delivery of the food, it is the most immediate consequence of the dog’s behavior. If it happens regularly, it may come to serve as a conditioned reinforcer, predicting the arrival of food (like a clicker does). But it may also scare the dog so much that he does not find the food worth the risk.

Dogs who are noise sensitive may not recover from this. Some may attempt to get the food without so much motion and their movements will become careful and inhibited. Some will refuse the toy altogether. One of my dogs became extremely frightened of the noise that the Manners Minder (aka the Treat&Train), a remote-controlled treat dispenser, makes when it jams. She initially loved this device and using it actually added value to any treat that was inside. But while most of the time the consequence of her nice behavior was a treat (positive reinforcement), sometimes it was a horrible grinding noise that would cause her to back away wide-eyed (positive punishment). I have stopped using this device with her until I can take the time to counter condition her response to that noise. So take care in selecting toys for sensitive dogs and experiment with them before giving them to the dog.

Antecedents: Conflicting Cues?
For most food toys, the discriminative stimulus (SD ), or cue, that food-seeking behaviors will be reinforced is the presentation of a loaded toy. As the dog interacts with a kibble toy, the sound of the kibble inside the toy becomes an SD as well. Or rather a series of them: the sound of a lot of kibble rattling inside the toy correlates with kibble being delivered more frequently; it predicts a high rate of reinforcement. As the toy empties, the sound changes, predicting a thinner reinforcement schedule. When the toy is empty, no kibble is audible—a stimulus delta (S∆), or cue that reinforcement is not available. The dog learns to stop.

However, when a compartment empties and food is will not be available until after the next bell, the sound of rattling kibble is still present. The dog can still smell the food in the toy. With every other food toy an experienced dog has played with, these are cues to continue pushing. There is no S∆ to let the dog know the food is now unavailable and that ball pushing will not be reinforced. And because the pushing has been reinforced on an intermittent schedule—meaning sometimes it took one push to eject food, sometimes a few—both with other toys and with this one, he will probably persist for some time.

What’s more, when the dog finally perceives that the previously reinforced behavior is no longer working, he may start to go through extinction. Extinction can be an unpleasant process. Its common side effects include frustration and an increase in the variability of behavior. We try to avoid the former when training. The latter is something we can plan for and use when shaping behavior—but that is a procedure that requires careful adjustment of criteria and observation of the dog and should not be left up to a plastic toy.

Among other reasons, it could be dangerous to the toy. I introduced three dogs to the Foobler. My smallest dog switched to gnawing on it when the active food compartment emptied and even she was able to inflict damage. Another dog decided immediately that the most efficient behavior was to chew the toy apart to get all the food at once. Although she is only medium-size herself, she could have dismembered the toy had I not been there to remove it. It should be noted here that toys can break down, either quickly or over time, and should be inspected regularly for safety reasons.

So you will need to supervise your dog closely to prevent behaviors that are damaging to the Foobler, which makes it less than ideal for one of its intended purposes: spreading food-toy engagement out over the course of a workday for dogs left home alone.

You will also want to teach your dog how to use it. A training plan would include teaching the dog that the bell means food is available, and—a more complex task—that when the food stops coming out of the toy, he should wait, for up to 15 minutes, until the bell rings again. Although there is no “training mode” for the toy, you can turn it on and off manually to temporarily shorten the intervals between the opening of compartments and build the association of the bell with food delivery.

Such a plan could address possible frustration with the toy’s reinforcement schedule but could not be relied upon to prevent a dedicated chewer from taking matters into his own mouth during your absence. We would do well to provide a different toy to dogs who have the ability and inclination to chew hard plastic.

Skills, Training and Supervision
We need to be careful consumers when we select toys for our dogs. We not only need to provide toys that are safe and fun for each individual dog but at times we need to train the dog to use them. We need to watch for fear or undue frustration. For the dog’s safety, we need to closely observe his interactions with a toy before leaving him alone with it. And finally, we may need to take time to teach even an experienced dog about a toy with a rule structure different from the one to which they are accustomed.