Which Puppy Would You Pick?

Whether you’re making the selection yourself or your breeder picks a puppy for you, what can you tell looking at an eight-week-old puppy? Other than it’s heartbreakingly cute and you wonder how many you can make it out the door with before anyone notices?

Luckily, there’s a testing procedure to that can give you insights into what to expect in the months and years ahead from this squirming ball of fur and razor-sharp teeth.

Evaluating puppies is a both a science and an art form and it’s not perfect. Every puppy is an individual and there are usually surprises as your dog develops and personality, temperament and inclinations unfold. But, if you’re like many of today’s dog owners, you’re going to spend the next eight to ten years training and living intimately with this dog. You want to know what you have to work with as it all begins. No pressure there, right? 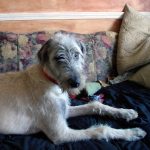 First, let’s assume that whether you’re getting a purebred or a rescue, you know the general type of dog you want. If you’re quiet and sedentary, a dog who lives to run may not be your first choice. If you’re active and outdoorsy, a toy dog may not be enough for your lifestyle. And let’s assume that if it’s a purebred, you’ve researched breeders and picked a knowledgeable veteran dedicated to the breed and not profit. Most of a dog’s temperament comes genetically through the parents, so you’ll want to be sure to meet and study them for a sign of things to come.

For weeks, I’ve been glued to my computer screen watching photos and videos of a litter of 14 Irish wolfhound puppies born on the 4th of July weekend. In my case, my breeder will pick which puppy I’ll take home.  I’m fine with that because she’s taken the time to get to know my wife and I and she has a record of successfully pairing puppies with owners. And, unlike me, she’s spent nearly two months living with and watching these puppies around the clock while I’ve spent a lot of time just cooing at my laptop screen.
I’m confident that I’ll have a vigorous, robust puppy, but other than knowing she’ll be a 100-pound juvenile in six months and the potential that I’ll be regularly dragged through the shrubbery is high, what else can I expect? I’ve noted which puppies are loners, which ones don’t mind being on the bottom of the pile and which ones don’t like to be left out of the fun.

But it won’t be until at least the seventh week that the puppies can be reliably evaluated. We know this thanks to Clarence Pfaffenberger, an educator and trainer of guide dogs for the blind, who popularized the notion that puppies need socialization to prepare for life in our world.

Training for guide dogs starts young and it is expensive and exhausting. Picking the right puppies to train is essential. In the 1960s, only about 9 percent of the dogs successfully completed training. Phaffenberger was understandably frustrated. He collaborated with other behavioral scientists and in 1963 published, “The New Knowledge of Dog Behavior,” which set the standard for evaluating and rearing guide dogs. The success rate for dogs evaluated using Phaffenberger’s methods jumped to 90 percent. His procedure has been used by numerous other high-profile trainers in devising evaluation plans of their own.

The seventh week is a critical time because that’s the point when a puppy’s brain becomes neurologically complete.  With each passing day, responses to temperament testing will be shaded by new learning, wrote Phaffenberger. More recent studies have questioned this teaching and some suggest testing is inconclusive until the puppy is several months old. But by then the prime period for socializing your puppy — before the 16th week — is past. Any clues that testing can give about your puppy are probably better than none.

Whether the pressure to pick a puppy is entirely on you or you simply want to better understand the puppy your breeder is giving you, take your time. You’re improving your odds for a successful relationship by learning the broad strokes of your puppy’s temperament. What you learn will help you adjust your socialization program and later training.

A puppy who has good social skills with its littermates is one who will probably do well with dogs later in life, so watch how they play fight and wrestle. Which ones enjoy the company of other puppies? Which ones are loners? Does the puppy you’re watching handle being on the bottom of a wrestling match as well as on top? When play biting and the other puppy yelps, does the biter quickly respond and release or does he play too hard?

How sociable is the puppy towards humans? The ones who willingly comes over to you out of curiosity and linger are more likely to enjoy the company of humans as adults. Your heart may go out to the puppy lingering shyly in the corner, but remember frightened dogs are more likely to become fear-biters as adults. Jumping up on you or nipping at the hem of your trousers is normal puppy behavior. The puppies who ignore you and go off on their own away from the litter to explore could be loners as adults as well.

When the puppy is eating or playing with a favorite chew toy, does it growl when you come near or remain relaxed?  Growling is a sign it could become a resource-guarder and will need counter-training later on.

When you gently restrain the puppy and pick it up, does it continue struggling or does it relax to your touch? Puppies uncomfortable with human touch could be hard to groom and live with in later life.

Drop a saucepan lid or tin plate a few feet away from the puppy. Startling is not unusual, but did the puppy yelp and run away, urinate or growl and snap the source of the sound? These puppies may be highly sensitive and require desensitivity training to cope with their environments as adults.

Take the test puppy in a separate room and play with it, then leave it alone for a few moments. Does it bark and cry while you’re gone? This could be a sign of future separation anxiety and if you take this dog home, you’ll need to train accordingly.

Finally, listen to your breeder. He or she has raised and observed numerous litters and knows the traits and quirks of the breed well. They’ve likely made extensive notes on each puppy. They’ve carefully sized up your puppy and can give you valuable insights.

You can find step-by-step instructions from several puppy evaluation tests on line. Just remember, while the steps are based on science, the interpretation of the results is subjective. It’s not a crystal ball, but it can give you the owner and trainer clues as to which direction to take socialization and training when you finally bring that puppy home. And, at that point, any clues are good ones. Plus, you’re learning a valuable lesson. You’re focusing on the nuances of your puppy’s behavior. It’s a skill you’ll want to continue to develop all your dog’s life.