Why is Colin Growling? 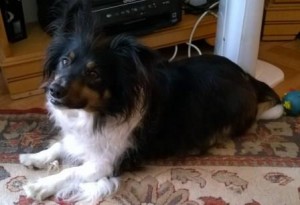 Understandably we don’t like our dogs to growl and it can be embarrassing, but growling is GOOD.

Growling tells us what our dog is feeling. Growling gives us the key to open the door to the dog’s emotions. When we know what he is feeling, we then know what to do about it.

Colin is a four-year-old collie-terrier cross looking like a very small Border Collie. He lives with his lady owner and a 16-year-old shih tzu called Barney, who is very slow moving, blind and deaf. 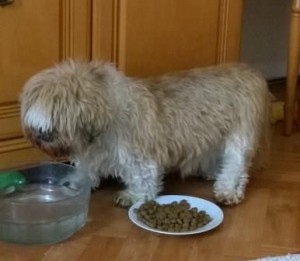 Whenever Barney approaches Colin, he growls. The lady assumes he growls because he himself doesn’t want to be approached by Barney. As a trained observer one sometimes sees different things. Because Colin is near the lady all the time, he growls because Barney is approaching her. I would be willing to bet he never growls at Barney if she’s not there.

In the photo (below) Barney had just come in the door which meant walking past the lady. Quickly Colin was under her chair, growling at him (something he couldn’t hear anyway!). 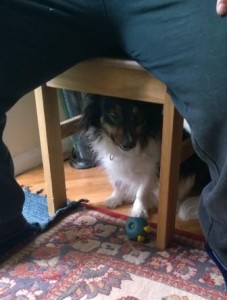 Colin also sometimes growls when touched. The lady, like most people, scolds him. I would say it’s only a matter of time before he abandons growling as a waste of time and nips instead. He is merely saying ‘please don’t touch me.’

The lady is going to keep a note of where on his body she is touching him when he growls to see if it may be local discomfort and need for a vet visit, or whether he simply doesn’t want to be touched anywhere just now thank you. Because he then lies on his back the lady believes he wants a belly rub. When Colin growls then, the lady think he is just ‘talking.’

He is! He’s saying ‘please stop’ or perhaps ‘go away’.

I experimented. I briefly tickled his chest and he moved into me for more, indicating he quite liked that. Then he threw himself onto his back. The lady said ‘see, he now wants a belly rub.’ I thought a demonstration would help her better understand him and, watching him carefully, I moved my hand gently towards his lovely inviting little soft tummy and he growled. He was saying ‘no thanks,’ so of course I backed off immediately.

This little dog has never bitten but I believe it’s only a matter of time. His restraint is amazing really.

The lady has two main angles of approach. First is to teach Colin by her own behavior that she isn’t merely a large unruly resource belonging to him that he must follow, guard and protect – and stop anyone else getting too near (he also reacts badly when she welcomes friends with a hug).

Second is for him to associate the approach of Barney (or the lady’s friends) with good stuff (food) and not scolding.

The protectiveness and nervousness has been spilling out onto walks where he will rush at dogs he doesn’t know for no apparent reason than to drive them away. He has not actually bitten yet, but it has been a near thing. Most recently Colin was off-lead and he charged – barking, growling and snapping, at an approaching young on-lead spaniel.

It’s embarrassing for the lady and distressing for the other owner and dog. People feel they must be seen to be taking a firm hand so they react by scolding. But scolding doesn’t work.  If it did, Colin would be getting better, not worse.

It’s also vital that the opportunity for this off-lead behaviour is prevented from happening again while work is done, starting with a bomb-proof recall or loss of freedom.

A friend had suggested spraying him with water and shaking a bottle of stones at him when he barks and growls at approaching dogs when on lead. Two bottles were waiting on the hall table. Fortunately I arrived before she actually started to use them.

‘A friend told me to do so and so’ is a very common theme with people I go to, with different people saying different things. There is all sorts of conflicting advice online also. ‘What people say’ (“you need to get a grip on your dog”) is invariably misguided and along the ‘quick fix‘ lines that may work in the moment but end up by making things far worse, with a confused dog becoming more fearful and aggressive.

In desperation people often end up doing things they feel very uneasy about, believing it’s the only way.

It’s not the only way. The lady is dedicated to doing her best for her little rescue dog.