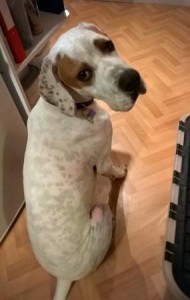 I am just back from ClickerExpo here in the UK and found the whole thing incredibly reinforcing. I gained a deeper understanding of things I thought I already knew.

Having been immersed in so much positivity for three days, back home I am seeing things around me through different eyes. At lunch in a café yesterday I watched a mother scolding her little girl and found it hard not to intervene. Today I visited for the third time a struggling client.  She was still finding it impossible to avoid ‘No’ and ‘Uh-uh’ in favor of  ‘Yes’, and I now wondered why I hadn’t been doing with her what I was trying to teach her to do with her dog Chase – looking for the things she was doing right.

Now bingo! She’s got it!

‘STOP’ implies a quick fix. Would a normal collar advertised as a collar for quiet dogs or a harness promoted as a ‘Walking Nicely’ harness sell as well, I wonder?

I very frequently go to dogs that are hyper and all over the place, gaining  a mix of negative feedback and confusion through constant scolding from exasperated and increasingly desperate owners.

Just sitting with these people and their dogs with a clicker, getting them to mark every little good thing the dog does whilst ignoring the unwanted things (where possible), works wonders both with the dog and with the owner. It is no exaggeration to say it can transform their lives with their dogs.

People with challenging dogs that seem to be constantly up to mischief don’t need any in-depth training course. It is really quite simple to make a huge difference. Just constantly look for, and reward, every little bit of behaviour that you like. That’s it.

Here are the stories of two dogs I have been to recently, as written up on my website www.dogidog.co.uk: 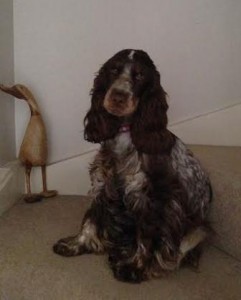 I visited a nine month old cocker spaniel called Willow. Wonderful!  My own irrepressible cocker spaniel, Pickle, has given me plenty of practice.

Here is a list of things Willow does: jumping up on people, excessive licking of people’s faces, jumping at the table and sides, barking (answering) back when told off, too much noise generally, stealing any items she can get hold of and running off with them, leading the lady a merry dance and getting cross when cornered, humping people, fixating and barking at certain objects, jumping over people and furniture, racing at speed round and round the room and growling when eventually caught and restrained, shoving toys at her people to make them play with her, pulling on lead and, finally, chasing the cat. Oh – and running back to the car on walks.

All this may sound amusing to read, but it can be exasperating and has reduced the poor lady to tears.

Willow really is adorable as you can see – and see the white tail? She is a soft, affectionate little girl. However, two or three short walks where she’s encouraged to keep moving and not sniff too much, just isn’t sufficient for her. She is BORED. 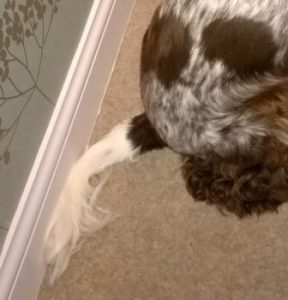 The family is on the back foot, trying to ‘field’ the things that Willow throws at them rather than themselves being proactive. She is a clever, working dog with insufficient appropriate stimulation so she is constantly finding ways to fulfill herself. She spends quite bit of time in the ‘naughty’ room.

‘No’ is a much used word.  In the three hours I was there we consistently looked for ways of saying ‘Yes’, and rewarding her with food. The lady was becoming really good at looking for the good rather than the bad and Willow was getting the message, becoming really focused.

It is only fair on a dog to let her know what you don’t want in a language she really understands – by letting her know what it is you do want instead. ‘No’ and ‘Get Down’ and physically pushing her off are very confusing messages when the dog wants attention, because they ARE attention.

If a dog is jumping all over me I consider how another dog would make his feelings clear to a bouncy adolescent. Would not a stable dog look away, turn away, maybe tip her off and walk away? The other dog would probably signal when he saw her coming, making his feelings clear from the start. Showing the behavior isn’t wanted is only part of the exercise. Just as importantly we then need to follow up by showing her just what we do want. If it’s ‘feet on the floor’ or perhaps sitting that we want, then that is when she gets the attention.

Giving Willow a more fulfilled life requires being creative and offering alternative incompatible behaviors instead of scolding or ‘no’, and constantly reinforcing the desired behaviors. They will need to go cold turkey on the barking for attention whilst scheduling into the day the sort of activities that satisfy her canine spaniel instincts – mostly nose-based. She needs plenty to keep her busy. When the family want to watch TV in peace, they need to instigate short bursts of activity themselves – during the advert breaks perhaps. She could have a hunting game, training games, a short ‘sniff’ walk around the block or a toy or chew kept aside especially.

Gradually, over time and with the help of food rewards, Willow will be looking for ways to get attention by pleasing them.  A different mindset for owners – looking for the good instead of the bad – can really help.

It’s the next day and I have just received this email: ‘We found all you said made absolute sense and we are now looking at interacting with Willow with fresh eyes.  Some things are so obvious it is almost embarrassing to have not realized it! At the moment she is lying quietly asleep – perhaps dreaming of the fun day she’s had today!

Altogether too much noise and barking from this little dog 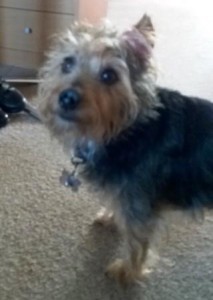 Little Scamp’s barking and vocalizing is driving his lady person crazy! He is an eight-year-old Jack Russell Yorkie cross and he has lived with her from eight weeks old.

This has been going on for years, so the lady does accept that what she has been doing (mostly shouting) hasn’t worked, therefore she may need to do things differently.

Having spoken to her on the phone, I was expecting something a lot worse. Scamp barks to get attention, he whines and squeaks too. He also alarm barks at sounds outside. The phone rings and he rushes to the lady and barks until she picks it up. She is worried about her neighbours.

As I asked all my usual questions I could find a whole lot more GOOD things than bad. I encouraged the lady to look for these things too. Here are some: Scamp stops barking when the lady picks up the phone unlike many dogs I go to, throw something and he brings it back and (usually) gives it up, he may bark at the cat in play but he is brilliant with the cat, he settles quietly and quickly whenever he is put into his crate, he has no problem with being left alone, he is very friendly to everyone and every dog, when touched or examined he relaxes like a rag doll… I could go on and on.

We need to look at the noise and why he makes it. Firstly he alarm barks when someone passes the house, the phone or doorbell rings or there are sounds outside. He barks when the lady goes to look out of the window (he senses it’s because someone may be outside?). Secondly, he barks when the lady doesn’t give him the attention he is asking for. Finally he barks with excitement when he’s playing.

Barking is what dogs do – some more than others. I wonder how many dogs would like us humans to talk, shout and sing less!

Where the neighbors are concerned, she admits with her shouting at Scamp to be quiet, she probably makes as much if not more noise than he does!

Just as with children, if we start looking for the GOOD things in our dogs it actually makes them behave better, and the things we don’t like become smaller.

It makes us happier too.